posted on Sep, 29 2015 @ 05:35 PM
link
This is super exciting! French architect Jacques Rougerie is building a small ocean city aimed towards scientific research. Essentially quality living space and continuous on-site research for scientists to get closer to the ocean like never before.


Jacques Rougerie has been able to spec out a massive floating city capable of housing some 7000 “ocean scientists,” and yet still hold the strict tolerances of the manta form factor. That, he says, provides the “best possible correlation between space and stability needs.” Practically speaking, that translates into the ability to resist turbulence and severe weather. Rougerie’s City of Mériens would be 900 meters long and 500 wide, while extending to 120 below the surface, and rising to 60 above. 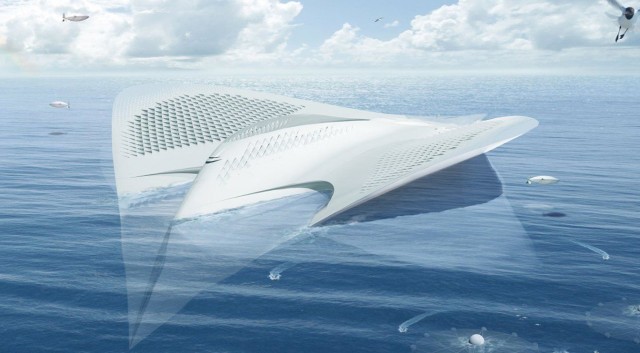 The plan mentioned above is a future projection of what his idea will become. However, the prototype is in the works NOW and is said to be completed NEXT YEAR!

Here's some more information on the prototype:

The best thing is that the prototype is only $50 million to build, which if you look at other ships, like private yachts, and what have you, is actually quite reasonable for what it is and can do.

This would be very cool if they can do it. 50 million though sounds a bit too low. I can see unforseen costs bringing this way up.

How will they keep it clean, do maintenance on it? Scrape the undersides after being out in the ocean for a few weeks? I can just imagine all that barnacle buildup etc.

Cool idea overall and would be fun to take a ride on it.

Could also observe more of the sea life for longer periods of time.

They should mimic giant icebergs, they're resistant to everything, except melting.

It would neat if this actually promotes the growth of habitats on the underside. An ocean science station/city with it's own ocean ecosystem growing under it.
That would restrict it's travelling options though.

posted on Sep, 30 2015 @ 10:16 AM
link
I think they would be better having all the accommodation above water rather than submerged. I could just imagine a seniority system building up over getting a skyside office/bunk as opposed to underwater or maybe the other way round if it were too sunny.

posted on Sep, 30 2015 @ 06:26 PM
link
I find these so very cool. I see it as the beginning of habitable craft for varying environments, like air, water, and even space. Can't wait to see where these are at in a few decades.

I have doubts about the price tag though..

posted on Sep, 30 2015 @ 07:26 PM
link
This is amazing news. Maybe we can make some permanent ones, that would be cool for retirement communities. No more senior drivers!