The Mystery Of Hillary's Missing Millions

posted on Sep, 29 2015 @ 02:21 PM
link
So, essentially, we have a new Clinton mystery. $50 Million dollars remains unaccounted for...that the Clintons aren't talking about.

The article offers campaign debt and gifts to Chelsea as possible explanations...but even those fall far short of explaining the financial discrepancy.

Naturally, like many things Clinton, this mystery will probably be never be explained. However, this being a political conspiracy forum, one has to ask, if...maybe, it might just be possible that some person (or persons) unknown has been getting paid off over the years, in order to protect Hillary's political career...or Bill's philandering proclivity, from blackmail.

This is he Clintons we're talking about, after all...and it is common knowledge that they have been associated with some very, shall we say, unsavory characters throughout their long and storied political careers.

Since Bill and Hillary Clinton left the White House in 2001, they have earned more than $230 million. But in federal filings the Clintons claim they are worth somewhere between $11 million and $53 million. After layering years of disclosures on top of annual tax returns, Forbes estimates their combined net worth at $45 million. Where did all of the money go? No one seems to know, and the Clintons aren’t offering any answers.

From 2001 to 2014 the power couple spent $95 million on taxes. Hillary’s 2008 presidential run cost her $13 million. Their two homes cost a combined $5 million, and the Clintons have given away $22 million to charity. All of this is according to FEC filings, property records and years of tax returns. Add it up and you get $135 million. If the Clintons made $230 million, spent $135 million and have just $45 million left over, what happened to the other $50 million?

It seems unlikely that the Clintons could have spent all of it. Over 14 years $50 million averages out to $3.6 million in extra expenses per year, or $9,800 per day.

WHERE COULD THAT much money have disappeared? The Clintons have been speaking around the world for years, and they count millions in travel expenses under their businesses. It is unclear whether they have paid for additional travel expenses out of their own pockets. It seems unlikely, but they could have given it away overseas: Donations to foreign charities are not deductible and would not be listed on tax returns. Billionaires like Prince Alwaleed Bin Talal of Saudi Arabia, Lakshmi Mittal of India and Joseph Safra of Brazil have donated to their foundation. Maybe the Clintons are returning the favor?

Or maybe they have given millions to their daughter, Chelsea, although she has plenty of her own money, after working for years and marrying hedge fund manager Marc Mezvinsky in 2010. The problem with all of these ideas is they are merely guesses. The Clintons did not respond to repeated requests for comment. Others were just as perplexed as we were.

“I don’t see how that would be possible,” said Jeff Mussatt, a certified financial planner who helped put together the financial disclosures for Republican presidential candidate Jim Gilmore. “That’s quite a quite a mystery you have on your hands.”

What we do know is that when Bill Clinton ended his presidency, he and Hillary owed millions in legal fees and were essentially broke. On a financial disclosure document Hillary filed after entering the U.S. Senate in 2001, the Clintons declared assets of less than $1.8 million and liabilities of more than $2 million.

Politicians are very adept in hiding money. Gangs, Drug Cartels, and mafia types could probably learn from them.

posted on Sep, 29 2015 @ 02:28 PM
link
Sorry don't want to de-rail you. But your last three words in the opening paragraphs should have read " Long storied criminal careers" versus political careers. Their crooks pure & simple.
edit on 29-9-2015 by openyourmind1262 because: (no reason given)

Rothschild Bank International is based in Guernsey and offers a range of private client banking services to high net worth individuals based in the UK or elsewhere in the world and works closely with other parts of the Rothschild Group.

The Rothschild name is synonymous with private banking. Our clients can take advantage of an international private banking service that respects tradition and reflects the requirements of the modern world. Our range of services is designed to reflect our clients’ needs and circumstances as they change over time.
About Guernsey

Guernsey enjoys economic stability, a skilled work force, excellent global communications and a stringent regulatory environment. In using these advantages to the full, Guernsey has developed into one of the world's major offshore financial centres and is home to banks and fund management groups from nearly 40 countries.


WHERE COULD THAT much money have disappeared?

Its pure coincidence that the Clintons, their aids, staff, friends, and servers are all riddled with amnesia

Even Stevie Wonder can see how corrupted and full of B$ these people are.

A real possibility. The Clintons employed a veritable army of private investigators to track down, intimidate and smear countless women Bill sexually abused, during his Lewinski days.
Remember Hillary's Bimbo Eruption Squad'? A lot of P.I.'s put their kids through college on Clinton bucks back then.

Having their own Secret Spy Network...is only a more expensive step-up from their 'Bimbo Eruption Squad' days.

originally posted by: xuenchen
Maybe the missing money is tied up in the "networks" ?


Dang. This is a fascinating article. This secret spy network could've soaked up millions of off-the-books Clinton money over the years.

posted on Sep, 29 2015 @ 06:05 PM
link
Hillary's Secret Spy Network appears to involce at least these three individuals: Sid Blumenthal, Tyler Drumheller and Cody Shearer. The article sited below, says it is unclear who financed their operations...but, given what we've learned through Hillary's emails with Blumenthal through the Guccifer hack, it's reasonable to assume their financing originated from Hillary. The below emails show that Drumheller and Shearer BOTH sought and cleared their financing of operations directly through Blumenthal. Blumenthal then secretly reported directly to Hillary Clinton.


It’s unclear who tasked Blumenthal, known for his fierce loyalty to the Clintons, with preparing detailed intelligence briefs. It’s also not known who was paying him, or where the operation got its money.

A May 14, 2011 email exchange between Blumenthal and Shearer shows that they were negotiating with Drumheller to contract with someone referred to as “Grange” and “the general” to place send four operatives on a week-long mission to Tunis, Tunisia, and “to the border and back.” Tunisia borders Libya and Algeria.

“Sid, you are doing great work on this,” Drumheller wrote to Blumenthal. “It is going to be around $60,000, coverting r/t business class airfare to Tunis, travel in country to the border and back, and other expenses for 7201310 days for 4 guys.”

After Blumenthal forwarded that note to Shearer, he wrote back questioning the cost of the operation. “Sid, do you think the general has to send four guys. He told us three guys yesterday, a translator and two other guys. I understand the difficulty of the mission and realize that K will be repaid but I am going to need an itemized budget for these guys.” 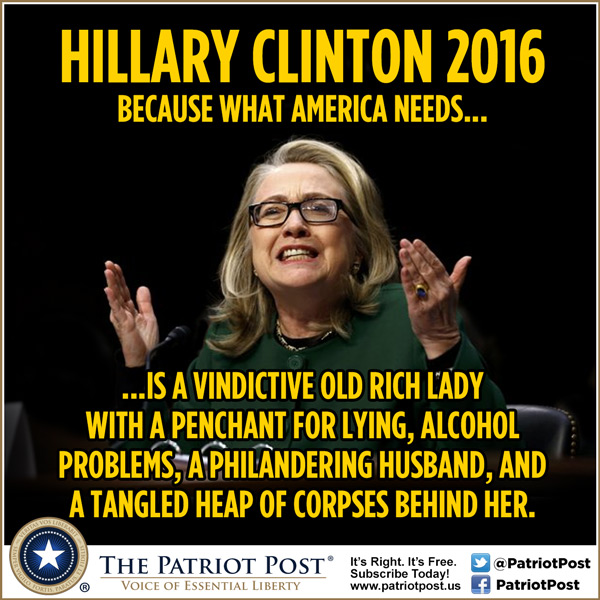 posted on Sep, 29 2015 @ 06:43 PM
link
Are these missing dollars in addition to the 6 billion that went missing during her tenure as Secy. of State?

gee.......and everything you say about Hillary must be true because there is a poster of it.....imagine that....

originally posted by: queenofswords
Are these missing dollars in addition to the 6 billion that went missing during her tenure as Secy. of State?


aww...c'mon....you guys can do better than that...how about a hundred billion stolen, and she murdered ten people.....feel better?

originally posted by: jimmyx
wow.....SCANDAL ALERT!!!!!!......a Forbes magazine writer can't find out where the Clintons put their own money or how they spent it........AHHHHHH!!!!!.......this calls for senate and house hearings, for sure....along with the obligatory criminal charges to follow

it's more than "national".