Dismayed by what they see as a lack of progress on the implementation of climate policies that they support, these 20 scientists sent a letter to the White House calling for their political opponents to be investigated by the government.

In particular, they are voicing their support of a proposal by Senator Sheldon Whitehouse (D-R.I.) for a RICO investigation of fossil fuel corporations and their supporters, who the scientists allege have deceived the American people about the risks of climate change, with the consequence of forestalling America’s response to reducing carbon emissions.

So now it is not enough to try to publicly shame fellow scientists, who refuse to bow to the almighty Global Warming/Climate Change Consensus, by deriding them as "deniers"...now those who advance contradictory science-based theories or ideas, should be investigated as potential mobsters?

The Climate Change (man-made variety) crowd needs to get a grip, and stop being afraid of having their theories challenged by their colleagues...er...stop being so blatantly obvious in their fear of the grant-money gravy train coming to an end.

Senator Whitehouse singled out one climate scientist, Willie Soon, a solar physicist at the Harvard-Smithsonian Center for Astrophysics who argues that changes in solar radiation, rather than carbon emissions, are the major force behind global warming.

Seven other climate scientists were the targets of a recent McCarthyite ‘witch hunt’ by Rep. Raul Grijalva (D-Ariz.). I was one of the seven. Rep. Grijalva indicated that I was investigated because of my recent Congressional testimony summarizing peer-reviewed research indicating that the magnitude and impacts of expected warming could be less than generally believed.

Oh my word...how outrageous to even suggest that natural and periodic changes in solar radiation might have some impact on temperatures here on Earth. Why in the world (or solar system, as the case is) would that make any sense?

And how dare Judith Curry (Professor and former Chair of the School of Earth and Atmospheric Sciences at the Georgia Institute of Technology) mention, during testimony to Congress, that there are peer-reviewed studies out there that suggest that maybe what the Consensus is selling is overstated. For shame Professor Curry!!

Go to jail, go directly to jail, do not collect any grant money...ever.

What these 20 scientists have done with their letter is the worst kind of irresponsible advocacy. Attempts by powerful people to silence other scientists, especially in this brutal fashion, is a recipe for stifling scientific progress and for making poor policies.

Bully tactics - and criminal investigations of those who oppose the most-common scientific view, at any given time - is not the way to move human knowledge and understanding forward.
edit on 29-9-2015 by mobiusmale because: typo

DAVID64
+4 more
posted on Sep, 29 2015 @ 06:33 AM
link
Being that trillions are spent on this and there's more coming with carbon taxes and govt grants to any little company that says it's green, they're trying to hold on to that all mighty dollar. Science be damned.
edit on 29-9-2015 by DAVID64 because: (no reason given)

posted on Sep, 29 2015 @ 06:35 AM
link
Yes, it's quite insane isnt it. the more and more i see story's like this unfold i have to ask myself the question.
Maybe the earth was settled just the way Douglass Adams described it in "Restaurant at the end of the universe".

posted on Sep, 29 2015 @ 06:39 AM
link
well it's too soon to tell.
what i am saying is this:
if those scientists acted in good conscience and just don't believe in climate change, then of course this is wrong.
maybe i am too cynical, but we all know that doing nothing to mitigate climate change is very lucrative. people are making billions off of this story. so it's not impossible to think that those scientists are not just sceptics, but are purposely damaging research because someone paid them to do so.

originally posted by: IShotMyLastMuse
well it's too soon to tell.
what i am saying is this:
if those scientists acted in good conscience and just don't believe in climate change, then of course this is wrong.
maybe i am too cynical, but we all know that doing nothing to mitigate climate change is very lucrative. people are making billions off of this story. so it's not impossible to think that those scientists are not just sceptics, but are purposely damaging research because someone paid them to do so.


It is possible that some scientists could be corrupted by dollars thrown at them by carbon-based industries (coal, oil, etc.) to bend facts to push that agenda...the same way the Tobacco Companies did years ago.

But, if we are to make that argument (in favour of a RICO investigation of deniers), then we should be just as open to the same level of scrutiny as it relates to scientists who are being pressured to present findings in favour of man-made climate change, by those who will benefit from such "findings".

From 2012-2014, the leader of the 20-scientist effort to prosecute climate skeptics under RICO reportedly paid himself and his wife $1.5 million from government climate grants for part-time work.

George Mason University Professor Jagadish Shukla, a Lead Author with the UN IPCC, reportedly made lavish profits off the global warming industry while accusing climate skeptics of deceiving the public.

Shukla is leader of 20 scientists who are demanding RICO (Racketeer Influenced and Corrupt Organizations Act) charges be used against skeptics for disagreeing with their view on climate change.

originally posted by: 727Sky
a reply to: mobiusmale
A vested interest ?

It seems he has about 1.5 million reasons to want to silence those who oppose his scientific conclusions (of personal convenience)...

He may want to be a little concerned that the RICO approach could boomerang right back to him!

Here is a hint - if the government displays ongoing OCD on a particular topic, it's usually because they want more money and for you to have less freedom. 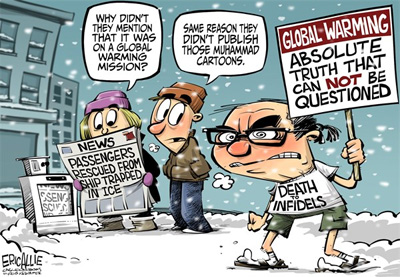 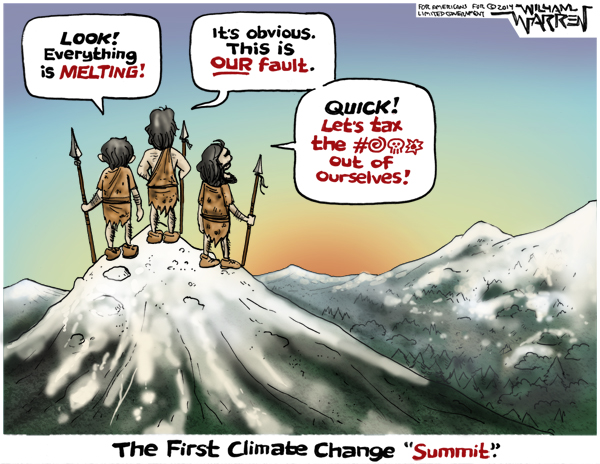 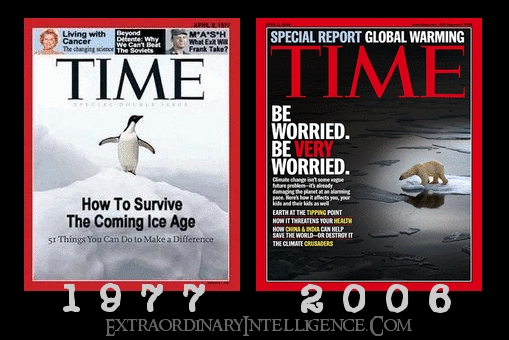 eriktheawful
+7 more
posted on Sep, 29 2015 @ 07:03 AM
link
Credible scientist know that their work will stand as long as their evidence and data holds up. This is the way science has worked for a very long time now, and is the best way about it.

Trying to use lawmakers to get rid of those who have opposing views or different ideas, is just wrong.

I fear someone has not been paying enough attention to the "new normal" in social trends.
It has become the norm in recent years to demonize, and even criminalize, anyone and everyone who dares to disagree with the accepted story line set down by the "Powers That Be".
Those who are incharge of telling the rest of us what is wrong and what is right.

You see; You are either with us, or you are against us.
There is no middle ground anymore.
No desent nor disagreement.

This has already been posted:

It's just as sensationalized here as it is for the other post too... The government isn't doing anything here. It's just scientists petitioning the government.
edit on 29-9-2015 by Krazysh0t because: (no reason given)

dont forget the Hoover era, oooh he was way outa line that guy

It's Copernicus all over again.

The establishment line on creation was set.

The Earth, being God's magnum opus, his perfect jewel among a Universal sea of rough stone was a unique masterpiece created explicitly for his crowning achievement - Humanity, sat right at the centre of the Universe, in a position of glory befitting such wondrous creation.

Copernicus challenged that view, using data obtained by himself of the movements of the planets and their relative positions with regards to the Sun.

As we all know, the establishment was completely wrong, had always been wrong and they probably knew it even back then, especially when Copernicus presented his data and proof of what he was saying...yet, the lie was continued and Copernicus paid for the establishments' treachery and deceit in maintaining their dogmatic and ignorant views.

The same thing is being attempted here with AGW...any dissenting voice is heresy. Very familiar isn't it?

I would argue that, in a democracy, in a nation built and founded on equality and freedom and a bill of rights...these scumbags who think themselves above dissent in such a nation who are calling for criminal charges and actual imprisonment for those who, like Copernicus, disagree with the establishments opinion, even when the evidence is clear that the establishment have it completely wrong, as was the case with Copernicus too...should themselves be either kicked out of science for the good of all, or at the least have enquiries and investigations made into their financial affairs to ascertain if there is any financial impropriety going on between themselves and those with a financial interest in shouting AGW from the proverbial rooftops.

Centuries go by, the topics change but Human corruption stays exactly the same as it always has been.

posted on Sep, 29 2015 @ 07:13 AM
link
All these scientists are petitioning for is investigations of fraud.

How about another new low?

A new low in science

And here's another New low in science

And to make it three from three, here's another one...

What next? we affix 'gate' to every noun in a headline ? it's not like that has been done before.

posted on Sep, 29 2015 @ 08:22 AM
link
So those for the climate agenda are criminal for denying the study of the science against scientific research and those against man made climate change are criminals and corrupt because they are opposing the climate change agenda
This foretells or even confirms the death of science, turning it into nothing more than a faith based assumption, based on what the individual scientists agenda is

Pity to those who believe in scientists and now science, evidently?

posted on Sep, 29 2015 @ 08:30 AM
link
This RICO20 gang may have opened up their own can of worms is what Steve McIntyre over at climate audit is uncovering is to be believed .


Roger Pielke Jr recently made the remarkable discovery that, in addition to his university salary from George Mason University (reported by Pielke as $250,000), Jagadish Shukla, the leader of the #RICO20, together with his wife, had received a further $500,000 more in 2014 alone from federal climate grants funnelled through a Shukla-controlled “non-profit” (Institute for Global Environment and Security, Inc.), yielding total income in 2014 of approximately $750,000.
Actually, the numbers are even worse than Pielke thought.
Pielke had quoted Shukla’s 2013 university salary, but his university salary had increased more than 25% between 2013 and 2014: from $250,816 in 2013 to $314,000 in 2014.
In addition, the “non-profit” organization had also employed one of Shukla’s children (not reported, but say $90,000); and,
IGES transferred $100,000 from its climate grants to a second corporation controlled by the Shukla family (the Institute for Global Education Equality of Opportunity and Prosperity, Inc.), which in turn transferred $100,000 to an educational charity in Shukla’s home town in India, doubtless a worthy charity, but one that Shukla could have supported from his own already generous stipend.
Over a million dollars in total in 2014 alone.

Asktheanimals
+2 more
posted on Sep, 29 2015 @ 08:45 AM
link
Those who attempt to criminalize a certain viewpoint are often good indicators that the actual truth is something other than what they're saying.

Yep, just like when Fawn Hill was caught shredding papers, since it was 'not what it looked like.'

Then moment I condemn the scientific community is the moment I turn the other cheek to BP, Enron, and Exxon.

This is the next step in the process. When too many people arent buying your particular brand of BS, you throw them in jail. Science has long been corrupted by money. This is just the litmus test of that contention.