posted on Sep, 29 2015 @ 12:30 AM
link
The Perlan-2 glider, built by RDD Enterprises made a successful first flight in Redmond, Oregon on September 23rd. The aircraft was towed to 5,000 feet, where it released from the tow plane, and tested basic flight parameters, and visibility out the windows. The aircraft then went back to RDD to have the oxygen and pressurization systems installed.

Next year, the aircraft will move to South America, where it will fly over the mountains and ride the waves to higher altitudes. The first attempt will go to 40,000 feet to ensure that the oxygen and pressurization systems work as planned. Then they will move to Patagonia and attempt to ride the Polar Vortex and reach 90,000 feet. The waves that they plan to ride can last for days.

Their inspiration may be to fly higher, without an engine, than the iconic Lockheed U-2 and SR-71, but an Airbus Group-supported team hopes successful flights to 90,000 ft. with the Perlan 2 glider will contribute to aeronautical and atmospheric research.

The pressurized two-seat glider made its first flight on Sept. 23 from Redmond, Oregon, where it was built by experimental aircraft specialist RDD Enterprises. In 2016, the Perlan 2 will be moved to southern Argentina, where its crew will attempt to ride mountain waves and the polar night jet stream into the stratosphere and the record books.

I wonder why they went with the funky windows.

Very cool. I have family that live in Redmond, OR. I wonder if they saw this?

With those windows it looks like someone from Scaled Composites designed it.

Structural reasons. They're stronger at that altitude.


I wonder why they went with the funky windows.

I just found another source, 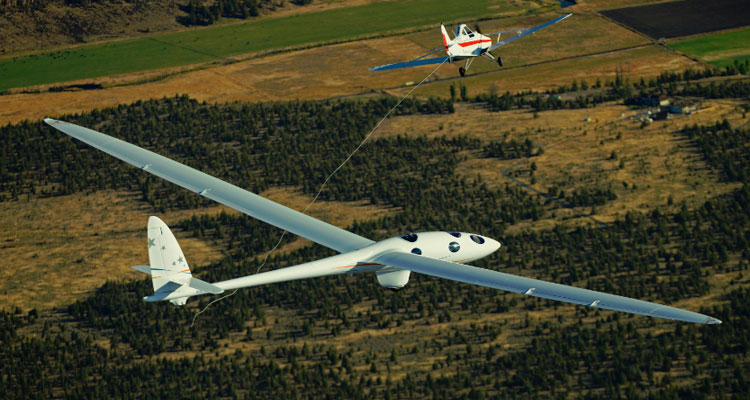 Airbus’ Perlan 2 glider, the world’s first engineless aircraft designed to reach the edge of space, had its first successful test flight last week, according to a Sept. 23 press release. The glider, a pressurized aircraft made largely of composite materials, flew 5,000 feet above Roberts Field in Redmond, Ore. Next year, in July 2016, Perlan 2 chief pilot Jim Payne plans to set a new world altitude record for any airplane by taking the plane 90,000 feet.

For the fuselage, engineers of the glider used a vacuum infusion process to lay up materials a carbon fiber mold. The mold was heated to a medium heat and held at a constant temperature for several hours. The final part was cured in an autoclave. The horizontal tailplane was built similarly, with the actual parts laid up in a mold with a lightweight pre-preg carbon fiber cloth.

In addition to helping the company drive manufacturing innovation, Airbus noted that the knowledge it gains from the Perlan 2 project will also help it gain a deeper perspective on climate change.

“We’re extremely excited about the successful first flight of the Perlan 2 glider,” said Ed Warnock, CEO of the Perlan Project. “This marks a major breakthrough in aviation innovation, one that will allow winged exploration of the atmosphere at the edge of space and lead to new discoveries to unravel some of the continuing mysteries of weather, climate change and ozone depletion.”

Airbus notes that since the Perlan 2 operates without an engine, when it eventually reaches the edge of space, it will do so without polluting the atmosphere. While touching the stratosphere, scientists will be able to take untainted air samples to measure levels of damaging chemicals and assess the state of the ozone layer. The 2016 flight will also have implications for aircraft performance and safety, as the Perlan 2 will allow aviation experts to analyze how high commercial aircraft can operate.

Good post. Hey do you know if it's possible to edit the title of your thread?
edit on 29-9-2015 by Telepathy3 because: (no reason given)

If it's still within the edit window, yes.