Do the wealthy pay lower taxes than the middle class?

posted on Sep, 28 2015 @ 02:15 PM
link
In the United Sates of America, do they wealthy really get all of these tax breaks I heave heard about? Are they free skating while people like me are shouldering the burden? The war on the wealthy seems to be a popular sentiment. Who really is paying the taxes that keep our Federal Government governing federally?

Sometimes you may come across a graph like this: 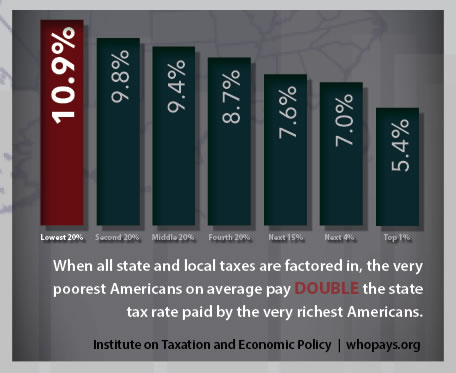 The intention is to say that the poorest 20% of Americans pay double the rate as the wealthiest 1%. This is of course only true when only factoring in State and Local taxes. What is not told, is that these poor Americans can write it off when filing their Federal taxes.

In other words, saying the tax system is upside down based on state and local taxes is like studying the estate tax or mansion tax and saying millionaires pay all the taxes in America.

So, what are the Federal Government's sources of revenue? Let me tell you, they are MAINLY Individual Income Tax and Payroll Taxes. Payroll taxes can be construed as another form of income tax because it is an employment tax. Your employer has to pay a certain amount that he/she cannot put back into the business for expansion or higher wages. A full 82% of Federal Revenue, comes from Income Tax and Payroll Tax.
TCP Link

Who is paying this 42% of Federal Income tax that keeps our Government going, knowing 40% is already coming from Employers/Employees in the form of Payroll Tax? Well in 2011, the latest stats I've found, the top 1% of wealthiest Americans paid 35.1% of the Income Taxes. Add to that the 1-5% wealthiest and they pay a full 56.5%. That is 5% paying over half of the Income Taxes in this country. How much more shall we attempt to squeeze them?

I see a problem with society think that money grows on trees. If that is the case, I question how much you can squeeze before the fruit no longer produces her juice?

There is some graphs and charts in the links I provided. I was unable to upload them, If anyone has the means, then by ALL means upload them here. It would probably help the discussion.

Another factor to consider is the fact that a lot of wealthy people make their fortunes off of capital gains, which in states like California have a tax rate of 13.3% www.nerdwallet.com...

The fact of the matter is that for those who are economically disadvantaged, they are having trouble finding a way to get by week-to-week on their earnings. Meanwhile, the wealthy find ways of dodging taxes, using off-shore banks and other avenues not feasible for Joe Shmoe working a 9-5.

The disparity between the rich and the poor continues to grow and people earning minimum wage cannot survive - if our representatives are living lavish lifestyles and getting all of these benefits, there should be some way of lifting up the poorest communities so they aren't struggling for crumbs everyday. It's just so wrong. That's how I feel.

As for myself, I pay my fair share of taxes and am not on any type of social services, but I see people who are everyday in my job. Year after year there are more people struggling and more people relying on the state for services, while services continue to get slashed and budgets are cut, those on Capitol Hill haven't made the same sacrifices and are still enjoying 1st-class flying and other percs unimaginable to the bourgeoisie/blue collars.

I have some friends who make very little money therefor are not subject to income tax. They do get an earned income credit which in some cases is a lot of money.
It is all very confusing to me as they are not subject to an income tax then what exactly is the credit for?
So, I would venture a guess to say that they certainly DO get a lot of breaks.
I do not agree with the first chart that shows the poorest of us paying the majority of taxes.
THAT would just be impossible IMO...

I don't know anything though...

Taxpayers earning $100,000 or more a year pay 71.6% of the nation’s share in individual federal income taxes, according to the latest data from the Internal Revenue Service (IRS) from 2011.

These data do not include corporate income taxes, or taxes on capital gains or dividends, or payroll taxes for Social Security and other programs.

Some of the rich over privileged twats probably dont pay any taxes if they can help it!
edit on 28-9-2015 by andy06shake because: (no reason given)

posted on Sep, 28 2015 @ 02:40 PM
link
Rates vary on the type of income you make. Super rich types tend to make Capitol gains and stock options and whatnot. They don't always get a pay check every week like you and me.

Getting Tax Breaks Via Charitable Donations ... To Themselves

It's #ty how the ultra-rich pay virtually no taxes, but at least
when they lower their bill through stuff like charitable donations,
it lessens the blow a bit. Sure, they're doing it knowing full well
it'll save them another billion dollars come next April, but if it
means fewer babies die of cancer, then deduct away, you princes
and princesses of opulence.

The problem comes when the charity forgets to charity and exists to
line the pockets of the Million-Dollar Douche running it. And then
donating to it for the tax breaks. Everyone's favorite philanthropists,
the Waltons of Walmart, have this scam down to an art form.
Despite being among the richest people in the planet, the Waltons
donate under 0.04 percent of their fortune to one charity: the
Walmart Family Foundation. That's not pennies on the dollar --
that's a microscopic shaving of the corner of one penny to the dollar.
They donated about $58 million over 23 years, but merely having the
charity saves them $3 billion in taxes. Per year.

Walmart1Percent
But that's not all -- the Waltons also utilize something called "Jackie O. Trusts,"
in which they put a bunch of money aside, with a certain amount going to
charity each year. Whatever remains after 20-30 years goes to their
beneficiary (i.e., other Waltons) tax-free. And since the IRS bafflingly
only requires that a charity spend five percent of its money on making
the world a better place, guess where the other 95 percent goes?

But hey, they donate some money, and if it goes to ALS research or
whatever, then at least it's something, right? Yeah, they don't do that.
Instead, they display paintings. Their Crystal Bridges Museum Of
American Art shows off all the artwork Alice Walton has collected
over the years, and ... that's it! A few hundredths of one percent
of more money than Dr. Evil demanded in exchange for not destroying
the world, and their big contribution is a room full of nice pictures.

I like you, being from TN. I was born in Millington, outside of Memphis. Tried to go b back to Murfreesboro, but to much family in So Cal. That first chart, was shown for the shear fact that it is not telling the story. Places that have no income tax hit the poorer harder. But that is mad up in Federal Income Tax Deductions. I live all around gamers of the system, they don't have the audits like the wealthy people dodging taxes do.

You will hurt a lot of middle class upping Capital Gains Tax. That is how we made it to Middle Class. I sit on a home worth more than I bought it for. Who deserves the Capital Gains?

I guess I don't know enough to say whether I am "for" or "against" capital gains, but I'm leaning towards the idea that it is too low if anything.

I was just explaining that this was another factor to be considered when looking at various economic classes and the taxes they pay.
edit on 28-9-2015 by FamCore because: (no reason given)

This is about taxes to the Federal Government. We have established Capital Gains are not a big funder of Federal Government. Plus that could be a big hit on me. Am I so rich as to pay your way? The bottom 50% pay only 2.9%. Don't touch my good life decisions.

You don't want taxes to go up, that's touching. But the truth is that taxes generally go it that direction.

How else are "They" supposed to squeeze the blood from the metaphorical stone?


As a matter of FACT, the top 50% of this country pay 97.1% of the Income Taxes to the Federal Government.

Uhm interesting, so why don't the super rich want a flat tax?

If true why wouldn't the top earners in this country want to pay the same income tax ratio as everyone else?

What is the income to tax ratio for the super rich versus say the middle class and who is paying more?

Sure they super rich pay more but who is really getting screwed?

Then you have Joe Smoe middle class guy who for what ever reason paid say 100% of his 100K income so he paid 100k in taxes.

So why shouldn't we all be paying the same income tax ratio to feel it the same?

originally posted by: Wildbob77
I think that this is a matter of language.

The more income you make the higher the capital gains get taxed. Many lower income and middle income taxpayers pay nothing on captial gains.

It is shown that the Top 50 pay for the bottom fifty at a 97/3 percentage. i do not want income tax or capital gains tax. It is a thieving is it not? Why should I work hard and think down the road and get checked for it? That is NLBS.

Shoot their hand while they are grabbing it?

Taxes go up, true, shall we not try to save the Republic?

Depends on how corrupt said republic has become i suppose.

A return to your original constitutional ideologies would be a step in the right direction. And shall we say less involvement in foreign matters that are really none of your concern(My own nation is no better) could possibly aid in the salvation of the republic.

But the finer point must be made, who has the discretion to tell me why my investments are yours? Can you tell me why you are entitled to my profits when I hold all of the risk?