“The Russian president called for an international coalition to fight ISIS in Syria.”

“In my opinion, provision of military support to illegal structures runs counter to the principles of modern international law and the United Nations Charter,” Putin said.“In reality, Assad’s army is fighting against terrorist organizations,” he added.
Virtually all of the rebels in Syria have sworn allegiance to ISIS and other jihadist groups and there is not “a secular fighting force to speak of,” The New York Times reported in 2013.

Putin said the Russian response in Syria is legal and appropriate under international law.
“We act based on the United Nations Charter, i.e. the fundamental principles of modern international law, according to which this or that type of aid, including military assistance, can and must be provided exclusively to the legitimate government of one country or another, upon its consent or request, or upon the decision of the United Nations Security Council,” Putin said.

That’s right I’m patting myself on the back that Putin is calling for the very same thing I have written numerous threads here about!


I posted this last may:


I said months ago and Ill say it again the only way to destroy ISIS is a REAL expeditionary force of 100,000 crack troops from this so called “coalition” You can’t win a war like this, this stupid thing Obama is doing will never work

It’s all in or all out against religious fanatics

You have to have some kind of strategic plan or unified effort and organization. This ragtag “coalition” can’t beat the vicious group of religious fanatics…it’s too scattered with too many varying interests.


Amazing one can’t even find any MSM mention of this one has to get it from alt media sources.


Amazing the American media is still calling for the destruction of Assad and cares little about fighting ISIS...
We here are truly in the pits

On Saturday The New York Times dismissed Putin’s effort as political theater designed to “shore up his ability to single-handedly dominate Russia, as he has for much of the past 15 years.” The Russian effort to help the government of al-Assad fight against U.S. and Gulf Emirate funded and trained terrorism is merely a “bread and circus” stunt intended to distract Russians from the conflict in Ukraine, according to Maxim Trudolyubov, the editor at large of the newspaper Vedomosti, a Russian language business daily.

It’s Putin who is doing what is internationally legal...NOT the US and Obama and Hillary’s illegal wars in Syria and Libya.

It may turn out in the end that it will be Russia who stops the new Nazis( ISIS) just as they were the ones who defeated the real Nazis during WWII.

The Russian's version of the 'Coalition of the Willing?' I wonder who would be in that coalition?

We could extrapolate from your psychopathic T&C violating assertion that we need to drone your quarters so your backward idea of a cure doesn't seep out of your dwellings four walls...

We could extrapolate from your psychopathic T&C violation assertion that we need to drone your quarters so your backward idea of a cure doesn't seep out of your dwellings four walls...

Only way to be sure.


I think he was making a satirical Aliens reference.

Ripley: I say we take off and nuke the entire site from orbit. It's the only way to be sure.

That is until the West comes up with a new boogie man to further control it's population with fear!

At least Putin isn't calling ISIS the JV team while allowing them to grow stronger!

Second time this week, Augustus... Thanks.

originally posted by: CharlieSpeirs
Second time this week, Augustus... Thanks.


originally posted by: CharlieSpeirs
Second time this week, Augustus... Thanks.

Can't tell if you're being sarcastic or not.

They're treating the Middle East like a testing site...

Let's not pretend he wants to fight ISIS for altruistic reasons.
edit on 27-9-2015 by CharlieSpeirs because: (no reason given)

originally posted by: CharlieSpeirs
Can't tell if you're being sarcastic or not.

Putin is calling for an international coalition because he wants to avoid Russia being the only country to lose face there. Fighting Daesh will be like juggling a blob of mercury. Every time Russia attacks, there will be massive collateral damage to the civilian population, but Daesh will simply pop up somewhere else. (For the record, I am going to excuse Putin in advance for this collateral damage and not claim it is really genocide.)

You let your guard down Sire...

I thought you'd have detected the sarcasm in my post.


Or maybe you did and we are now stuck in a loop.

Or maybe you did and we are now stuck in a loop.

Must. Resist. Urge. To. Be. More. Sarcastic.


So on topic, I say let him take a crack at ISIS if they want to, no skin off our back.


And if the world did the immigration crises in Europe wouldn’t exist.


10 of thousands of human beings would still be alive


And ISIS wouldn’t be romping around the ME.


If anything Putin has had, unlike the US, restraint

Calling for an international coalition is the right thing to do whether it’s successful or not. 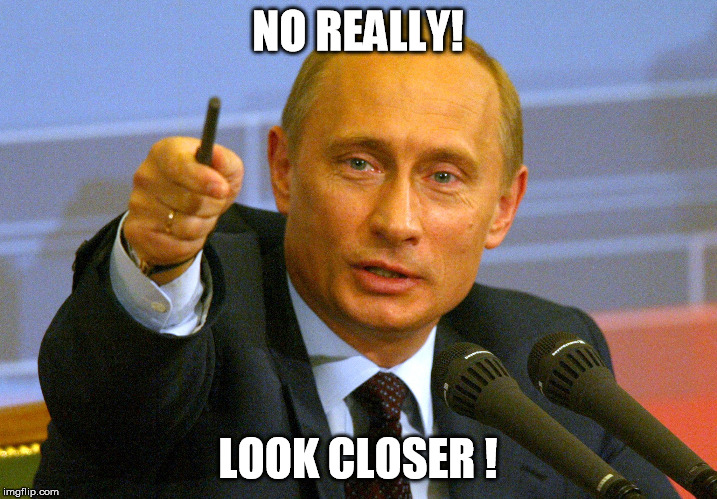 Putin certainly is no saint


Though we all know everything is relative therefore compared to the US Putin may be a saint!