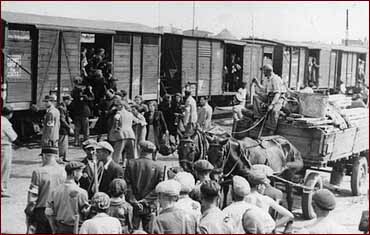 Now before you hit the alert button this is a picture of Germans being deported from the then country of Czechoslovakia. Just months after the horrors of Auschwitz , Treblinka , Dachau etc . Months , just months and there was a "final solution of the German question" . Sound familiar .

In the months following the end of the war "wild" expulsions happened from May until August 1945. Czechoslovak President Edvard Beneš on October 28, 1945 called for the "final solution of the German question"

Moving on to the present , and beyond more to the point , will we ever see people being forced upon trains to go to places they do not want to go to . Given human history and our inability to learn from said history it could be argued that it is possible . Lets go back to 1975 .

In all, an estimated 1 to 3 million people (out of a population of slightly over 8 million) died due to the policies of his four-year premiership.[11][12][13]

The death toll has reached over 240,000 and almost half the country’s people — 12 million men, women and children — have been forced to flee their homes.

The now . Isis is killing people because of their religion , or because of their lack of religion and millions are trying to get into Europe . Will these people integrate , time will tell . Will the people of Europe rise up if their freedoms and way of life are threatened , time will tell .
Were the allies aware of the holocaust . Was the west aware of the atrocities of Kampuchea . Has the world tried to stamp out Isis . Will the trains run again . Will it be Christians or Muslims on the trains .

First the Jewish people then the Germans. Both suffered horribly, but that is what war does. Right now it is the Syrians. Tomorrow it will be another people. This keeps happening because we do not change our behaviour. If we keep behaving the same way then the same result will occur time and time again. It is cause and effect.

I wont argue numbers of those that died or were displaced , i will agree we have not changed . Can we change , is it built into our DNA to kill anything that does not fit our cultural or religious beliefs . I dont have answers , only questions .

To answer your thread title - yes we will see this again and again until the United Nations and Vaticans vision of wealth redistribution is realized to it's full measure.

A redistribution that is currently being forced upon western nations through increased taxation to pay food, shelter, clothing and other resources to account for the influx of individuals from 3rd world nations to 1st world nations.

The United nations should encourage the redistribution of wealth, Pope says (back in 2014)

Funny , or not so . That word solution keeps on coming up .

Yes, pretty much a part of the history of the world part (?) The Germans that were expelled in some cases were the lucky ones, in Poland many were marched up the road and shot.
This is not an inability to learn from history, this is an ability to make war, create it even, like the wars in Iraq, and the deliberate purpose being to get rid of one man..how many died then?


News just in, German nurse Bettina Halbey, 51, is being thrown out of her flat to make way for refugees

There is that word again . Solution .

The council has justified the eviction by saying that it is a 'free' solution to the influx of refugees in the town.