page: 1
66
<<   2  3  4 >>
log in
join
share:
IAMTAT
+36 more
posted on Sep, 25 2015 @ 05:27 PM
link
What a prefect busy (Boehner resigning & the Pope addressing U.N.) Friday afternoon news dump to reveal the discovery of a chain of over 900 emails involving Libya, that Hillary had not turned over. Apparently, they've just been turned up by the State Dept...and will be going to the House Select Committee on Benghazi...before Hillary Clinton testifies.

These can, and will, be incredibly damning for Clinton...not just because of what they may tell us about her lies surrounding Benghazi...but because she never turned them over as government-related correspondence. Furthermore, she had already sworn in a document, under threat of perjury, that she had turned them all over.

Curious, as well, is WHY the State Dept. has finally stopped stonewalling and miraculously is discovering that it had and just discovered these incriminating emails.


WASHINGTON – The State Department has discovered more Hillary Clinton emails related to Libya and Benghazi – and is now turning them over to the House Select Committee on Benghazi, sources say.

One source close to the investigation said they include a chain of 900 Libya-related emails that Clinton failed to turn over when she provided what she said was the full record of work-related correspondence when she was secretary of state. Not all of them are related to the 2012 Benghazi attacks.

The revelation adds to the growing questions related to the Democratic presidential front-runner's unusual usage of a private email account and server while in government.

The messages, according to reports, were exchanged with former top Gen. David Petraeus, beginning before Clinton entered office and continuing into her first days on the job.

Petraeus was head of the U.S. Central Command (CENTCOM) when Clinton took office in 2009 and then went on to become director of the CIA from 2011-12.

Officials said the emails largely pertained to personnel matters and in no way dealt with classified material. But their existence challenges Clinton's claim that she has handed over the entirety of her work emails from the account.

Jamal D. Ware, spokesman for the Select Committee on Benghazi, issued a statement Friday in response to the news about the new documents.

“The State Department, which has failed to comply with multiple Benghazi Committee requests and failed to act in good faith, is now indicating it intends to foster a more cooperative relationship with the committee. It’s curious the Department is suddenly able to be more productive after recent staff changes involving those responsible for document production.”

The State Department has already released more than 13,000 pages of Hillary Clinton emails – not all Benghazi related -- as part of an ongoing Freedom of Information Act process. Clinton has taken heat for having the private email address and a separate server, casting doubt over whether all of her communications relating to the 2012 attacks on the U.S. diplomatic compound in Benghazi would be turned over to the committee.

Ware said the new emails have not yet been turned over. “The Committee is not yet in receipt of this new production, and will not be issuing any statements regarding it until it can be thoroughly examined,” he said.

“If indeed this is a sign the stonewalling and political protection effort that was previously being run by the Department is diminishing, the Committee welcomes it. The proof will be in the production.”

Clinton is expected to testify before the Committee investigating the attacks in October.

posted on Sep, 25 2015 @ 05:28 PM
link
Can someone give me a TL;DR on the Clinton email stuff and Benghazi please? I keep meaning to look into it but then I see a squirrel.

Now if the congressional investigation panel never had access to Clintons server how can they say without equivocation there was 'no' wrong doing.

And Why did they blame Benghazi over a video ?

Because Clinton, and her boss were up to it there.

I think what has been going on has been about CLinton covering her duplicity, and well as the presidents.

She would of just stayed home and baked cookies.

The email TL;DR is she may have been doing some gov work on a private server/email while taking the browns to the superbowl.
Joke being because the server was in her bathroom I guess.

And I guess we are gearing up for yet another Benghazi investigation, lost count on how many it is now.

Clinton is expected to testify before the Committee investigating the attacks in October.

I bet she gets deathly "sick" or severely "injured" before that happens.

Oh look, another millionaire dynastic career politician - this one is suffering from selective memory loss. I put this down to her being diagnosed with a brain tumor during her recent colonoscopy.

She is clearly a victim of circus-pants.

originally posted by: IAMTAT
We are talking about a chain of over 900 emails concerning Libya, which she failed to turn over.
Kind of a HUGE mistake? accident? Brain Fart?

Poor Petrious aye? Let's see how the wheels of justice roll in comparison to Hillary's indiscretions?

Liars lie and often believe their own tall tales.

HC going to jail? What a Christmas present THAT would be, huh! 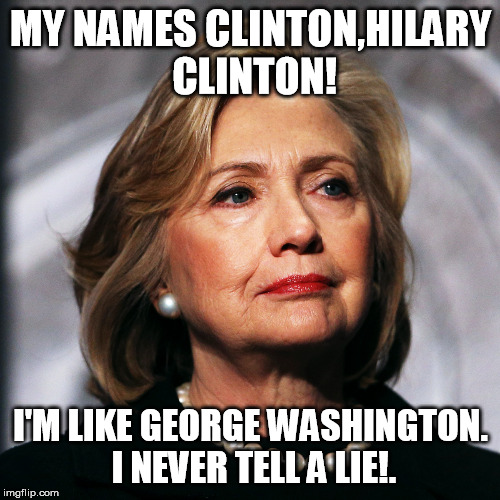 Metallicus
+8 more
posted on Sep, 25 2015 @ 06:33 PM
link
There might actually be some justice in the world if this hag can be prosecuted and put in jail. It might restore some of my faith in our justice system.

What an insult go hags everywhere.

posted on Sep, 25 2015 @ 06:43 PM
link
I would love to see her and her boss revealed for the liars they are, but, and this is my official prediction, she will NEVER be prosecuted or see the inside of a courtroom, much less a prison cell. This will play on and on and on, till it just runs out of steam and the public forgets and moves on to the next shiny distraction.


Clinton is expected to testify before the Committee investigating the attacks in October.

I bet she gets deathly "sick" or severely "injured" before that happens.

posted on Sep, 25 2015 @ 06:51 PM
link
She will never admit to any wrong doing. Her defenders will continue to defend her. I don't see the republicans having the spine to push this too far. Everyone will make some noise and that will be the end of it.

posted on Sep, 25 2015 @ 06:54 PM
link
Seriously when does this "Traitor's" trial begin? And tell me how in the hell is this Creepy bitch still running for office? 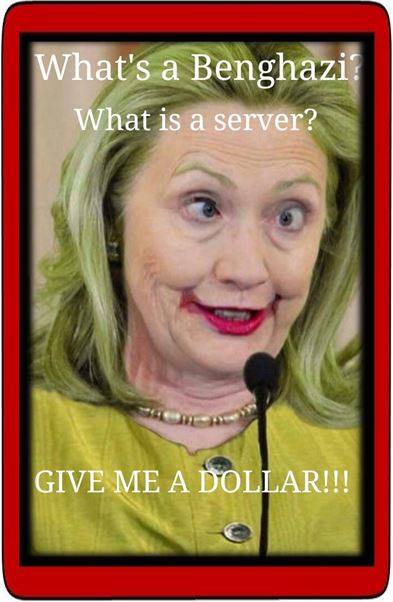 originally posted by: Metallicus
There might actually be some justice in the world if this hag can be prosecuted and put in jail. It might restore some of my faith in our justice system.


Good luck with that.

originally posted by: DBCowboy
She will never admit to any wrong doing. Her defenders will continue to defend her. I don't see the republicans having the spine to push this too far. Everyone will make some noise and that will be the end of it.

Too easy of a prediction.
Many have already said and believe this.

But you, along with the others, will be right.

originally posted by: DBCowboy
She will never admit to any wrong doing. Her defenders will continue to defend her. I don't see the republicans having the spine to push this too far. Everyone will make some noise and that will be the end of it.


probably the first correct one too.