posted on Sep, 24 2015 @ 09:34 PM
link
After the wake of the Ukraine crisis and recent military build up by Russia in Syria. Putin and Obama will finally be holding talks.

The meeting comes at the request of the Kremlin leader, and although it is not clear yet what will be discussed, there are however indications that the Syrian crisis will be the main agenda. Perhaps the Kremlin leader is inclined to provide clarity on the Russian military build up in Syria and plea with the US to assist with demolishing IS for good.

One can also speculate the Ukraine crises will not go without mention in this meet as well. Since US has been vocal about accusing Russia over the war in Ukraine.

Russian President Vladimir Putin will hold talks with his US counterpart, Barack Obama, during his stay at the UN General Assembly, Dmitry Peskov, the Kremlin press secretary, said.

“A meeting with Obama has been coordinated,” Peskov said, adding that the Russian leader will also be negotiating with Japanese Prime Minister, Shinzo Abe.

When asked about the agenda of the Putin-Obama talks, the press secretary’s reply was “I’ll give you three guesses.” Later, Peskov specified by saying, “naturally, Syria is going to be topping the agenda.” “If there is enough time,” the Ukrainian issue will also be discussed by the leaders of Russia and the US, he added. According to the press-secretary, the meeting will last from 50 minutes to an hour and will take place after the Russian president’s address at the 70th session of the UN General Assembly on September 28.

Moscow and Washington have given their mutual consent for the talks to take place between the two presidents, Peskov stressed.

The White House has confirmed that President Obama will discuss Russia’s contribution to “what is already an ongoing multi-nation coalition” in Syria.

“There’s a lot of talk and now it’s time for clarity and for Russia to come clean and come clear on just exactly how it proposes to be a constructive contributor to what is already an ongoing multi-nation coalition,” said Celeste Wallander, the White House National Security Council’s senior director for Russia.

It does not however come as a surprise though, after having meet with Natenyahu and made an agreement to an "honest" exchange of information regarding the Syrian crises. read more

As it seems, the military move by Russia in Syria, has surely stirred up the US - Isreali coalition. There is talks left, right and center about the Syrian crises alone. If anything, the Syrian crisis has surely got the big guns talking...

As far as the OP...who knows what they're really going to talk about?

Will probably have a homebrew and a game of chess.

Or play the game, hardball eachother, and we all die from nuclear war....

Gotcha. I have not been too good about staying up in the sep. doomporn..thought it was over the 23rd. infolurkers point about the pope makes sense.

Anywho, would love to be a fly on the wall in the room the conversation mentioned in the OP takes place.
This is what its like when huge egos collide.

Or maybe what it's like when Bushs and Clintons get together....??


Putin has boxed the Muslim WH Occupant in a corner... either Hussein Obama actually will take direct action to decimate the ISIS Thugs/criminals or be shown for what his Marxist-Socialist-Muslim ass is...a hater of freedom/capitalism/American exceptionalism in times of distress...

originally posted by: Volund
a reply to: InnerPeace2012

Hmmm...Interesting news, so this leaves more room for speculations of why the two leaders want to hold talks. Let's say since Russia stirred up the crisis in Ukraine and has since been active in the fight against IS, I see no reason why there should not be any talks between.

With the tensions and propaganda spewed between, it's only stirring up things. Let's wait and see what comes of this meeting?

originally posted by: St Udio
a reply to: InnerPeace2012

Very good point indeed, US backing out on working with Russia to fight against IS will all the more consolidate the indication of IS as their own.

I'm with you on this one. 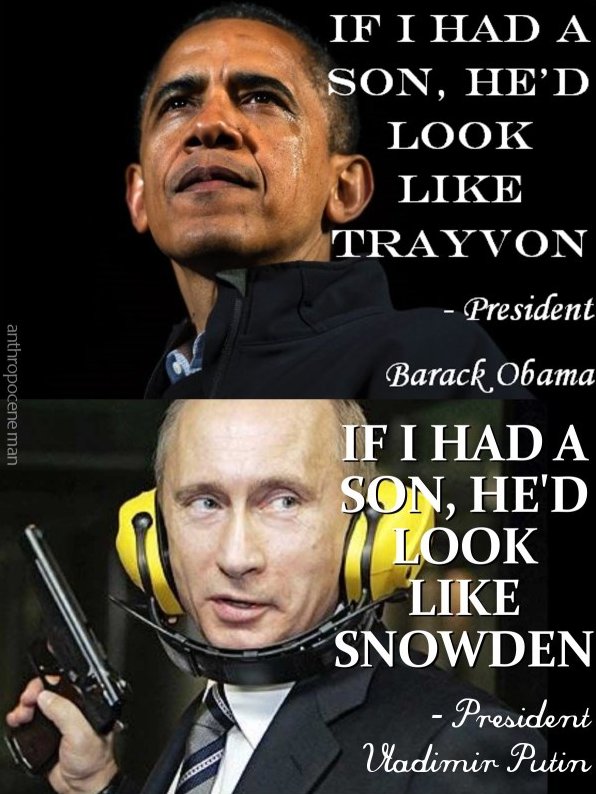 Let's get ready to rummmbbbbleeee!

Past history is the best indicator of the future.....

Obama said to Syria (paraphrase): If you use biological weapons you will have crossed a line. They TOTALLY crossed the line and NOTHING happened.

Obama said of what is now known as ISIS (paraphrase): They are the JV team. I don't have to tell you what is going on over there.

If we go back a little bit further... Obama and Hillary said they had pressed a "Reset Button" with Russia and all was going to be right with the world. Yeah...not so much.

This alleged "Iran Deal" was no deal at all. Iran essentially received everything they wanted and offered virtually NO concessions. For goodness sake, we didn't even obtain the release of our prisoners!!! They self-inspect and on and on and on.

posted on Sep, 24 2015 @ 10:57 PM
link
Syria announced today that the US and Russia were going to cooperate with each other on ISIS. So far I have not seen anything in the US / West media on that one.

As others pointed out I would imagine Ukraine is most likely on the list as well.

LOL...things are so tense between the two, who's to say they may start a brawl at the meeting...hahaha

I'm going with Putin with one to tall Obama, right where the sun don't shine...yikes!

Not sure whether to laugh or cry... or cry and laugh simultaneously.

US President Barack Obama appeared to pause a two-year effort to isolate Vladimir Putin on Thursday, agreeing to what the White House said were “repeated requests” for a meeting.

The Kremlin and White House said the two leaders will have their first formal meeting in two years on the margins of the United Nations General Assembly on Monday, although they gave differing views as to whether the talks will center around Syria or Ukraine.

And the announcement was accompanied by a series of disparaging remarks from the White House about image-conscious Putin and Russia, underlining the festering distrust between the old Cold War foes.

The decision to hold talks checks a US policy of punishing Putin for his invasion of Ukraine, a stance that also brought international sanctions that have crippled the Russian economy.

“The president did make a decision that it was worth it at this point to engage with President Putin in a face-to-face meeting to see if the interests of the United States could be advanced,” White House spokesman Josh Earnest said.

originally posted by: eluryh22
a reply to: InnerPeace2012


I agree with your remarks there, you quite paint the picture of the Kremlin leader very well. There is tensions between the two, but I see Putin avoiding talks about Ukraine while focusing more on Syria and Obama raising concerns over Ukraine and Russia's involvement with Syria.

If anything, US would not want Russia to go full on on the US backed-IS, so I think the meet is an interesting on to look out for.

World peace may surely be dependent on the outcome of this meeting. I hope for a common understanding to put an end to IS, but on the other hand I don't think it's in the best interest of US to fight alongside the Kremlin.

posted on Sep, 24 2015 @ 11:11 PM
link
Pure speculation however I wonder if Putin will out the current US Administration with hard proof of Isis being funded/trained by proxies and maybe throw around some satellite photos in his presentation of 9/11 and that hugh false flag just to stir the UN corruption pot a little...then top it off with a US rebuttal by acknowledging ET exists then all hell breaks loose from ebt shutdown due to all the space toys built for the 1%...the movie Iron Sky comes to mind however I've been wrong before

I'm more than horrified of the prospect that the United States really is backing ISIS.

I admit that as time goes by it is starting to look like that is the case.... but I still struggle to even begin to wrap my mind around that. As f-ed up as the United States is... we can't be THAT bad... Can we?