Sept.23rd, is the Northern Autumnal Equinox.

The aurora below was captured by Dominic Cantin near Quebec City, Canada on Sept. 7, 2002 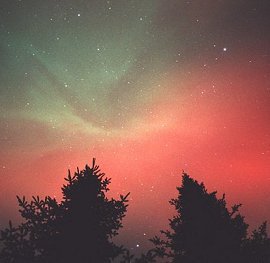 Auroras appear during geomagnetic storms--that is, when Earth's magnetic field is vibrating in response to a solar wind gust. Such gusts pose no danger to people on the ground because our magnetic field forms a bubble around Earth called the magnetosphere, which protects us. The magnetosphere is filled with electrons and protons. "When a solar wind gust hits the magnetosphere, the impact knocks loose some of those trapped particles," explains space physicist Tony Lui of Johns Hopkins University. "They rain down on Earth's atmosphere and cause the air to glow where they hit--like the picture tube of a color TV

Plenty more to read on the subject however below is an Editors note... check out the link to read more.

Editor's note: Seasons are reversed in Earth's two hemispheres. Today is the beginning of both northern autumn and southern spring. Because geomagnetic activity is higher during spring and autumn, aurora season is therefore beginning in both hemispheres.
more information

A CME is expected to deliver a glancing blow to Earth's magnetic field on Sept. 23rd. The impact may be weak, but on the first night of autumn, it could end up being strong. Right now Planetary K-Index is at 4 which is "unsettled". It's going to be interesting to see who captures the best aurora tonight.

Sundays full Moon is a "SUPER MOON," as much as 50,000 km closer to Earth than other full Moons of the year.

On Sunday evening, Sept. 27th, the supermoon will pass through the shadow of Earth, turning the lunar disk a cosmic shade of red.

Below is a nice tranquil video and more information about this weekends SUPER Moon Eclipse!