originally posted by: Aazadan
Oathkeepers are a domestic terrorist group and deserve to be treated as such.

No, they are not. That's utterly absurd.

Oath Keepers is a non-partisan association of current and formerly serving military, police, and first responders, who pledge to fulfill the oath all military and police take to “defend the Constitution against all enemies, foreign and domestic.” That oath, mandated by Article VI of the Constitution itself, is to the Constitution, not to the politicians, and Oath Keepers declare that they will not obey unconstitutional orders, such as orders to disarm the American people, to conduct warrantless searches, or to detain Americans as “enemy combatants” in violation of their ancient right to jury trial. See the Oath Keepers Declaration of Orders We Will Not Obey for details.

Oath Keepers reaches out to both current serving and veterans to remind them of their oaths, to teach them more about the Constitution they swore to defend, and to inspire them to defend it. See below for details on how we do that. Oath Keepers also includes a membership program designated as “Associate Members”, which consists of patriotic citizens who have not served in uniform but who serve now by supporting this mission with their Associate Membership and volunteer activities. Oath Keepers welcomes our Associate Members and appreciates their support of our mission.

Now as to this particular guy, his views may not line up at all with what Oathkeepers as a whole thinks about the Iran deal. And I seriously doubt Oathkeepers are ready to go around the country and arrest all the politicians involved and then arrest Obama too- even if they don't agree as a whole with the Iran deal. This sounds more like a guy that was or is a member of Oathkeepers, and is throwing their name around to try and gain traction for his extremist intentions- is what it sounds like to me. I am not going to throw the baby out with the bathwater as you are attempting to do (and failing miserably, btw.)

And what do I base my comments about Iran on? How about the fact that I am an 11 year veteran of ATS and have been reading more than I care to about Iran, its people, and its leaders for a very long time. I think we threw Iran a pretty big bone and they turned right around and knocked us over the head with it. And continue to, every day. Maybe we should take that bone back and bash their skull in.
edit on Wed Sep 23rd 2015 by TrueAmerican because: (no reason given)

Oathkeepers are a domestic terrorist group and deserve to be treated as such.


You can show a complete list of arrests and convictions right?

Then compare to a list of big city criminal gang arrests and convictions.

In the way we use and abuse the word, street gangs could easily be seen as terrorist.

originally posted by: TrueAmerican
No, they are not. That's utterly absurd.

Really? What would you call an armed group that is ready to start shooting at the feds at a moments notice? After the Bundy Ranch situation they should have all been arrested. Shaping government policy through the use of force or the threat of force is terrorism.

After the Bundy Ranch situation they should have all been arrested.

Most of the guns in the pictures were either toy replicas or non-firing.

How many Oath Keepers committed crimes at Bundy Ranch?

I bet you think big city police brutality is overboard too. 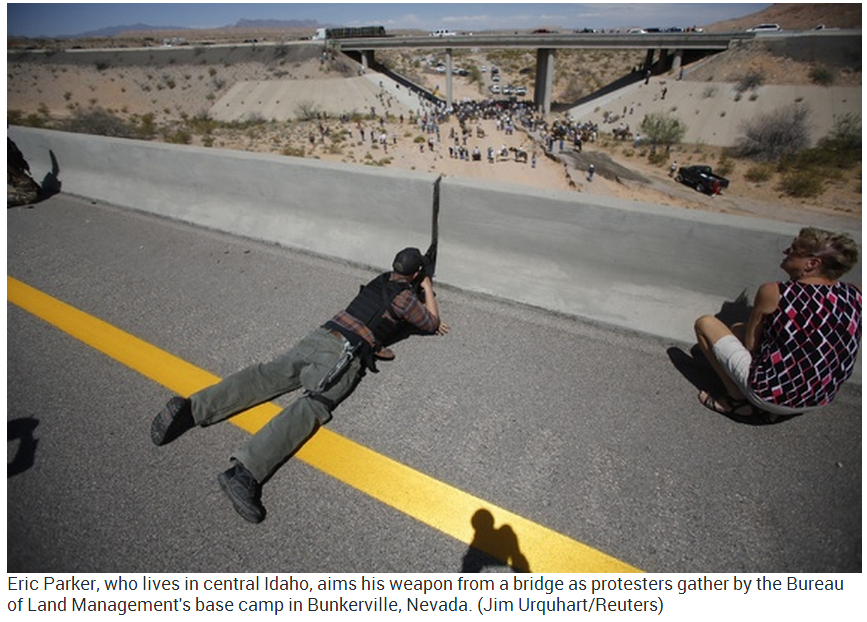 All of them may be overboard but this guy at the very least.

People get shot for much less then that these days.

x, did we just get a bunch of GLPers over here or something?

When was the last time you knocked on an Oathkeeper's door and asked them "Are you ready to shoot at the Feds on a moment's notice?" - and they said "Oh, absolutely. I'm ready. Let's go. Call me a terrorist."

edit on Wed Sep 23rd 2015 by TrueAmerican because: (no reason given)