posted on Sep, 22 2015 @ 08:52 PM
link
This could very well be the beginning of the end of Hillary Clinton's campaign.
This latest revelation of a discrepency over Hillary Clinton's story as to why she turned over her emails to the story of that of the State Department...took Clinton by surprise...leaving her scrambling for an answer which wouldn't come.

Caught like a deer in the headlights, when questioned about the differing stories by a reporter...all Clinton could say was:
"I don't know that. I can't answer that".
Sooner or later, the lies catch up.

Obviously, Obama and Jarrett have decided to let the chips fall where they may, giving the nod to the State Dept. that Clinton no longer need be shielded. Biden is their man, now...especially as Biden may very well have just agreed to serve only one term and to allow Obama to designate his choice as V.P. to take over.

Another apparent discrepancy has arisen in what Hillary Clinton has said about her emails.

When The Des Moines Register asked her about the latest twist in the private server saga on Tuesday, she said she had no new answers.

Just before Clinton sat down for a 105-minute meeting with the Register's editorial board, the Washington Post posted a news story that said the State Department's request for her emails was "prompted entirely by the discovery that Clinton had exclusively used a private e-mail system."

That contradicts what Clinton has been saying, which is that agency officials asked her for her emails as part of a benign, general record-keeping effort to sweep up "everything from other secretaries of state, not just me," as she said Sunday.

After the editorial board meeting, a Register reporter asked Clinton if she could explain the discrepancy between her characterization of why she turned over the emails and the State Department's.

"I don't know that. I can't answer that," Clinton answered. "All I know is that they sent the same letter to everybody. That's my understanding."

The Register told Clinton that the Post was reporting that State Department officials contacted her in the summer of 2014 — a sign that officials had been caught off guard upon discovering she had used a private server to conduct government business. That was at least three months before the agency asked Clinton and three of her predecessors to provide their e-mails, the Post reported.

"You're telling me something I don't know," Clinton said. "All I know is what I have said. What I have said is it was allowed. The State Department has confirmed that. The same letter went to, as far as I know, my predecessors, and I'm the one who said, 'Hey, I'll be glad to help.'

"But we'll give you additional information as we get it."

"As we have said, Secretary Clinton responded to a request of her and other prior Secretaries of State to assist with the department's record keeping," campaign spokesman Nick Merrill said. "Due to her practice of emailing her colleagues on their state.gov email addresses, 90 percent of her work-related correspondence occurred on the department's email system, and she provided her copies as well, about 55,000 pages total. Everything she has said in answering questions has been consistent with this."

posted on Sep, 22 2015 @ 08:57 PM
link
She should have used Hotmail and cut out the middle-man. These things keep dripping out, but many of the people who have had it even enter their awareness probably don't know what the fuss is all about.

Empty promises is where it's at.

It is a shame as well. She had potential...


How will Hillary go down in the history books I wonder?


Everything she has said in answering questions has been consistent with this."

Goddamn, can she just #ing go away please?!

Sooner or later, the lies catch up.

It has been my experience over the last five years that anyone with a D by their names. The LIES never seem to matter.

Some people just don't want to hold the Clintons to the same standards as the Fiorina's.

It has been my experience over the last five years that anyone with a D or R by their names. The LIES never seem to matter.


Fixed that for ya.

As for the OP, Clinton has really stepped in it with the whole email scandal. I'll be VERY surprised if she's even in the running anymore in a few months. She's lied one too many times I think, people know her game now.
edit on 9/22/2015 by 3NL1GHT3N3D1 because: (no reason given)

My what a tangled web, sooo many different stories
she has, how can she begin to keep track of them?

Someone is leaking info, as the news was FBI was going to follow
protocol, and would not even acknowledge an investigation. 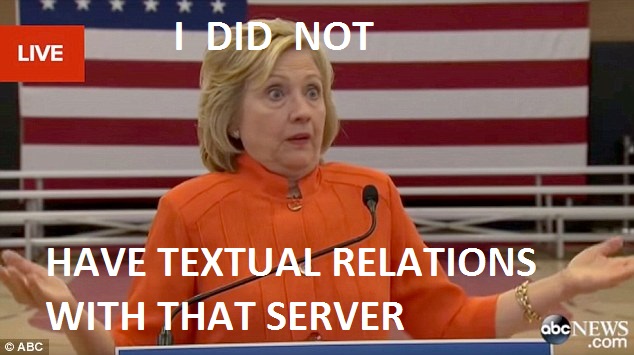 
Yup.
The NYT also said the FBI recovered personal and work emails.
Bottom line:
If even ONE work-related email that Clinton deleted, but did not turn over is is among those recovered...IT'S GAME OVER!

Yes, funny how just today State decides to admit they asked
Hillary for the records back in 2014.

They say timing is everything.

I just wish a really good journalist would take this on,
and follow it to the end, you know... like when Nixon went down.

posted on Sep, 22 2015 @ 10:19 PM
link
a reply to: IAMTAT
Oh, it will ultimately be the end of her campaign. But i doubt she will see prison for anything. This is all orchestrated to help Bernie and prison is not part of the plan.

There needs to be a Clinton scandal 'Deep Throat'...other than Monica Lewinski.

originally posted by: MotherMayEye
a reply to: IAMTAT
This is all orchestrated to help Bernie and prison is not part of the plan.

Biden will split the moderate democrat vote with Hillary and throw the race to Bernie. *Ross Perot style* He already took 12+points from her last month without even announcing a run. Bernie GAINED 12 points during that time, too, btw.

Bernie plans on letting Congress divert the most money to their pockets. He's Teh Chosen One.

Biden will split the moderate democrat vote with Hillary and throw the race to Bernie. *Ross Perot style* He already took 12+points from her last month without even announcing a run. Bernie GAINED 12 points during that time, too, btw.

Bernie plans on letting Congress divert the most money to their pockets. He's Teh Chosen One.


Good opinion.
Rumor has it that Biden will run for only one term...and that he will agree to choose Obama friend and ally former Massachusetts Gov. Deval Patrick as his running mate.
For that, Obama will completely ditch Hillary and Bernie and support Biden and Patrick...continuing the Obama legacy for two more terms.