Power to the people - our inaction can save us.

We toil in the farms and the factories, we're the very bread and butter of those who continually walk all over us, destroy the world and commit murder apparently on our behalf. We maintain their systems, operate their transport and give them a comfortable life.

We've already acknowledged the truth that we have power. We've seen the power of protest and social media - some of us even think TPTB live in fear that we will one day wake up and rise up.

We have the power of social media still at our fingertips, we can communicate instantly with millions of like-minded people all over the world. Some people would happily take that power from us, in fact there are probably some already trying.

The number of people waking up continues to increase, we've got movements like Anonymous and Occupy. Support for these causes is greater than ever. People the world over are sick of the few destroying the world with disregard for the majority. Sick of wars, sick of people fleeing their country en masse, sick of murder being carried out on their unwilling behalf and being told that they too, have blood on their hands.

Posting videos on YouTube and protesting social inequality is great but it seems to be achieving nothing. We're chucking firecrackers at a tank that will eventually destroy us doe to our inability to act. But inaction is one of our greatest power.

Regular Joe Schmoes drive it all, the economy, industry, the world. Without Joe, profits are gone, comforts gone, luxuries are gone. The typical Joe Schmoe is used to that having knocked his pan in all his life for a meager pittance. The elite are not so used to such situation. They destroy and corrupt unions because they fear them. The unification of the regular Joe Schmoes the world over must surely be a terrifying prospect for the few...and it has never been more possible or necessary than it is now. Not tomorrow.


Here's what I think needs to be done to help restore equality and peace. I don't think it would be easy, but I think it's the only real non-violent but effective way for humanity to tell these idiots that it ain't happening no more.


1. Stockpile supplies for a bit. Craft some meme, social media crap - something iconic like that damned Guy Fawkes mask. Something that will inspire people and get their attention and help spread the word. You'd need hashtags!

2. During the stockpiling of goods and spreading of the message set a date - I can see it now, a huge image giving the specific times for every international timezone that exists - this is the offset of inaction and it shall be harmonious - being shared by millions on social media. Humans aren't enemies with each other or at least need not ought to be. The unification of the people the world over has never been more possible than it is now. We outnumber the monsters vastly.

3. On the agreed date everything stops for 24 hours, an international day of inaction. this is our greatest power and phase one of the message - Without us there is nothing for the monsters. There are supplies should things become nasty. destroy the enemy by staying at home with your families and sitting in the dark, eating cold beans for a day or so. No doubt an acoustic guitar and some cumbaya
will be involved there, somewhere...and why not?

4. Things resume and the next date is already set - if the initial phase does significantly well enough more people may be inspired to take part in the following phase.

5. Continue this until something gives This is non-violent. This is the united human race's way of parading their nukes and tanks through a city. It would take a long time to destroy the world economy by firing missiles and guns but in reality the people of this world can probably do it without getting out of bed.


Sure, a lot of folks will initially think it's a silly idea, it sounds like it and I realise that. But it isn't really, it's a mass protest, like the kind you'd see in any city centre of a hot summers day - they're pretty common these days. Only it's a concerted, worldwide event. Do I think enough people would initially have the nuts and/or guts to participate in the initial phase? In the current global climate, hell yes. Yes I do.

Enough to make a serious dent, cause enough panic and thus inspire more people to participate.. You can go to your work if you like...but you'll find it difficult doing your job if mr x, y and z ain't there to do theirs. I can live without spark for a few days, without running water even. The circuit needn't be destroyed - just no current. The enemy can be destroyed simply by doing nothing.

Naturally, I'm not suggesting that anyone goes out and actually tries to initiate this plan...you'd most likely be accidentally shot in the face several times or commit suicide by repeatedly bashing yourself over the head with a mallet.

But it's a nice idea, any thoughts? If someone or a group were to attempt to do such a thing they'd have to be pretty covert about it I'd say, and clever, because someone would try and shut that madness down as quickly as possible...and that would be a true testament to just how powerful an idea it actually is.

originally posted by: HeathenJessie
Power to the people - our inaction can save us.

History has shown us how effective a peaceful inaction can be when the Indians did a mass disobidience to it's British Colonizers under Ganghi. Simple but very effective. 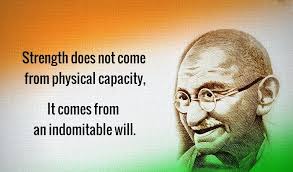 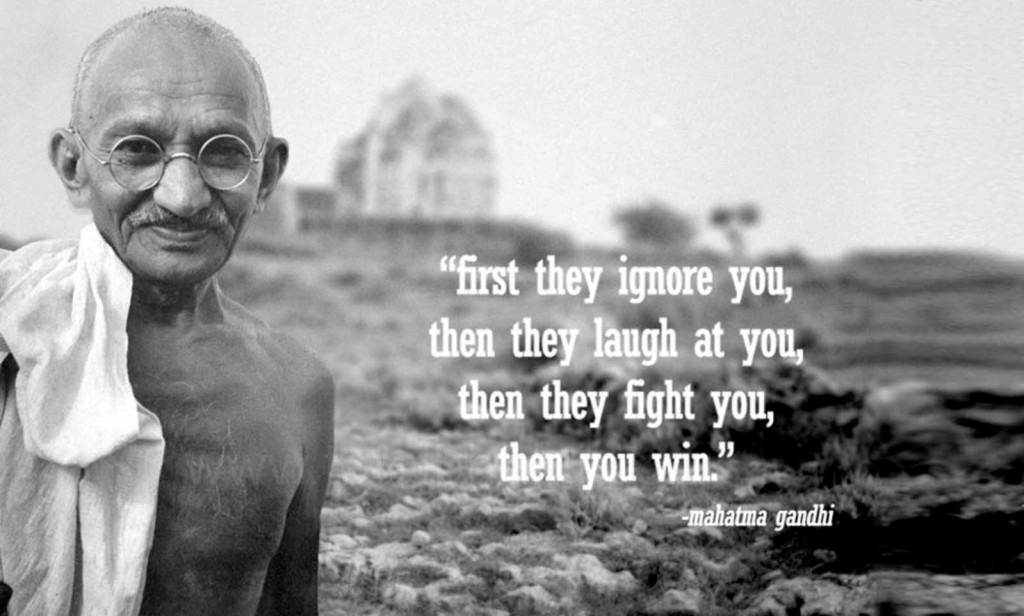 A day wouldn't do it. And how exactly would this affect whatever it is you are wanting affected? I don't see your point although I agree that collective boycotts for specific causes can be effective. I just don't see what you hope to accomplish in a day of nothingness. On Christmas day in the not too long ago, just about everything was closed on that day. The market didn't crash and businesses survived.

IMHO, a massive boycott needs to be succinct in focus and directed at very specific targets. Why cut one's nose off to spite their face?
edit on 22-9-2015 by StoutBroux because: (no reason given)

I like how you think... it's been done before and could work again.

But there would have to be an end game -- specific demands -- or it's just more feet stomping that's easily ignored.

Plus, the demands would have to be something that a majority of people support...

I don't mean to be Debbie Downer -- I swear! Just trying to make the most of this

We can simply do it to end war!

originally posted by: InnerPeace2012
a reply to: Boadicea

We can simply do it to end war!

That's an excellent place to start. Especially after the story about the Afghani boys' abuse, but I think most people are pretty tired of war, and our boys coming home scarred and battered and worse.

Yes, that works for me.

posted on Sep, 22 2015 @ 08:17 PM
link
Who are the powers to be? Are you trying to affect the rich man on the hill? Or are you trying to change the Government? 24 hours might make the government pay attention, but they have imported foreign workers for years... we are all replaceable. 24 hours of inaction will only hurt ourselves.

originally posted by: onthedownlow
Who are the powers to be? Are you trying to affect the rich man on the hill? Or are you trying to change the Government? 24 hours might make the government pay attention, but they have imported foreign workers for years... we are all replaceable. 24 hours of inaction will only hurt ourselves.

No it won't hurt, if you have all the necessities you need. Being optimistic is key, it will work when properly organized.

People the world over are sick of the few destroying the world with disregard for the majority. Sick of wars, sick of people fleeing their country en masse, sick of murder being carried out on their unwilling behalf and being told that they too, have blood on their hands.


I totally agree!! We're all slaves to the few. The people of the world are emotionally and physically locked into a system that keeps us from uniting and demanding change. We're chained to the monetary system. As long as we have money in our pocket, a roof over our heads and food on the table, we feel secure. Until the system crashes, and the people of the world find themselves in the same boat, will the majority force change.

It's disgusting that the people of the world let their governments invade or threaten other countries with war or nuclear attacks. The people of the world are just pawns in a chess game for these religious zealots and narcissistic politicians. They use our young men and daughters to sacrifice their lives to do their power bidding. Maybe if politicians and leaders were handed a rifle and told to lead the charge in their declared wars, maybe wars would finally become a thing of the past.

posted on Sep, 22 2015 @ 09:41 PM
link
'Occupy' anything to me nowadays means riot meanwhile the government readies the next coup, massacre or invasion.

posted on Sep, 22 2015 @ 10:09 PM
link
What I do is now more for myself then the belief I can change anything but what started out as targeted boycotts turned into a boycott of almost everything produced by globalist corporations that I don't need to survive. This might sound like I'm punishing myself. It turns out that isn't the case at all as I'm much happier then when I was a mass consumer.

I don't think it'd hurt me, replacing a significant chunk of any workforce is much easier said than done...besides, replace them with who?

24 hours is just a taster...and yes, it's about ending the stupidity, the wars would be a great place to start. We have a voice, our only problem is we're not unified or organised on a global scale.

Like this - you go to war, fine...we'll just stop doing what needs done and only resume when you relent and give up any notion of invading any more foreign lands. ETA - unless you live for the moment...no struggle is easy, it isn't supposed to be easy and if we're lazy about it then no, it won't work. Either live for the moment and regret it in the future or realise taht to change things will take actual effort.

The truth is I'm sick hearing it and reading it, talk is cheap but ain't nobody doing anything really meaningful, is there?

I have a vision of us being in a much worse situation say 10 or 20 years from now...and having less power to organise and communicate and looking back and thinking we had our chance and we slept on it. We did nothing, and we are to blame for our predicament.
edit on 23-9-2015 by HeathenJessie because: (no reason given)