My First reaction was, well possibly is not Fidel Castro, but an actor in a Saturday Night Live charade about the visit of the Pope to Cuba, but No, absolutely No, this is something pretty real.

In a tour that this week will him to USA, to Philadelphia for the world meeting of families, the Pope H.H Francis I is now in Havana, Cuba.
Today the Bishop of Rome visited in his apartment the ideological leader of the Cuban Revolution, a news that has received a lot coverage by the international media.

Although Cuba is considered the least Catholic of all the Latin America countries, due to the so many decades under a Marxist Leninist Regime that used systematically atheistic propaganda and boycotted any religious freedom or education, anyway the visit of the Pope is followed by thousands of devote people that has greeted the Pope in the streets.

It comes to my attention the ADIDAS Track Jogging suit of former President and Commandant Fidel Castro, used in a public act to receive the Pope, instead of his classic OLIVE GREEN MILITARY CAMPAIGN suit, that identified him along decades, something that few years ago was unthinkable to see wearing by the most constant and fierce critic of the capitalist system.

I am sure the executives of the ADIDAS sport wear company never imagined to have such promotion of their products, they can claim that their brand is so famous that even Fidel Castro couldn't escape to the temptation to use it openly.

Is this a signal of a drastic change in the mentality of Fidel Castro with respect to the market economy? a moderation in his traditional points of view with respect to the free economy? How is that the most Marxist of all the leaders of the world is showing a boutique casual taste to dress in public events?

Anyway the detail that in any other leader of the world could pass undetected is pretty meaningful coming from a person that once used to call himself the last truly communist of the world.

Curiously, today the Pope gave a speech in a public in Cuba calling the people to give less attention to ideologies and focus more in the persons.

The thread is open to comments of course under the rules of mutual respect and decorum in the communication.

I saw that as well and thought the irony of that murdering, Communist turd wearing something from a Capitalist corporation was supreme.

posted on Sep, 21 2015 @ 10:43 AM
link
Since Raul took over the day-to-day stuff, Fidel has been usually seen dressed down in a comfy track suit. Can't blame the old man for wanting to be comfy in his semi-retirement.

You cannot be a good revolutionary now if you dont use adidas.


This shows the pope bump power, you people probably dint even remember Fidel was alive if not for the pope
edit on 21-9-2015 by Indigent because: (no reason given)

posted on Sep, 21 2015 @ 11:23 AM
link
Maybe he was feeling a bit bloated from last nights sushi or something???
Nothing like good 'ol stretchy pants.

Well, that is a pretty strange way to preserve a revolutionary look, I'm wondering what Vladimir Lenin could say of this if he would be alive?

A possible explanation is that Castro took too much seriously the speech of the Pope calling to abandon ideological positions.

Anyway if anybody wants to order a "Revolutionary" Adidas Track suite like the one wore with such grace by Commandant Fidel Castro , here is the link:

Karl Marx, Comunist Manifest: ( revised translation from German) Proletarier aller Länder vereinigt Euch!, literally "Proletarians of all countries, unite!", You have nothing to lose but your chains!",,....( welcome to join us if you come with your ADIDAS track suit)

posted on Sep, 21 2015 @ 11:49 AM
link
Its probably revenge for all those spoiled american kids wearing chè gueverra tshirts

The worm has turned...

posted on Sep, 21 2015 @ 11:54 AM
link
ha ha, what a treat to see that Christianity-hating monster of a dictator see the Pope in his country getting such an enthusiastic greeting. nearly sixty years of propaganda and indoctrination by the Cuban state hasn't been able to put out the flames of faith.

the owlbear is right. Castro has been pretty casual for several years now. 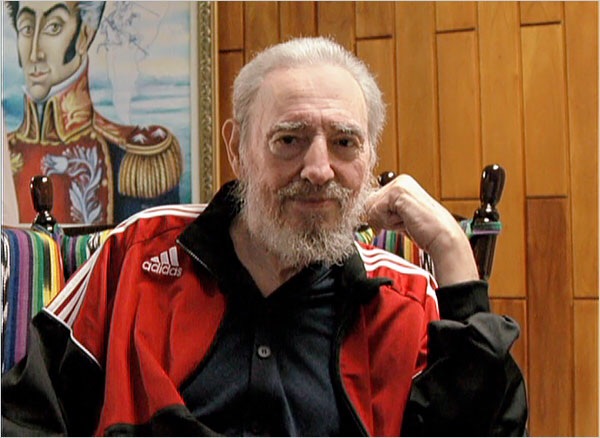 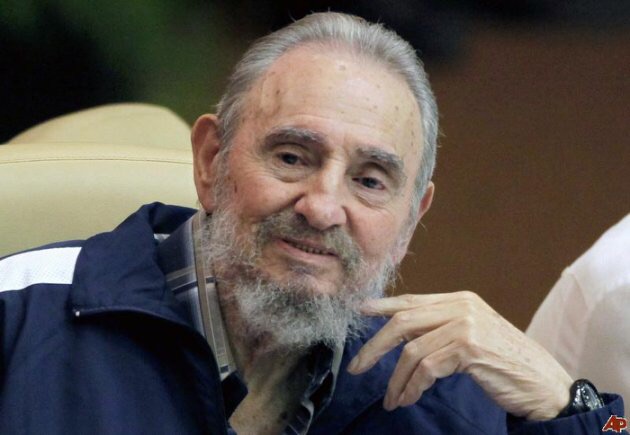 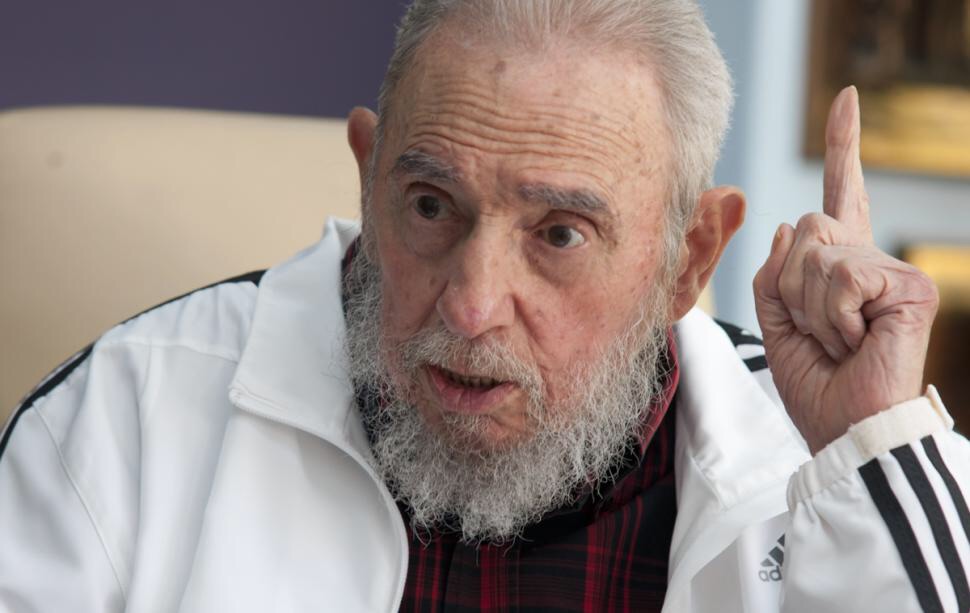 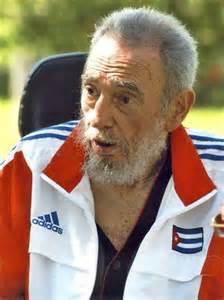 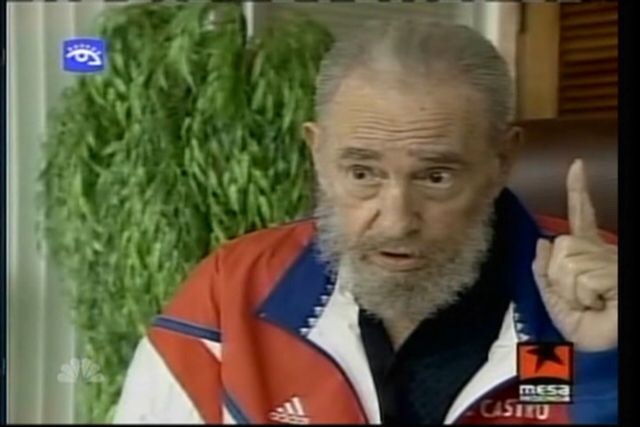 Well it is true that now the USA and Cuba has formally reestablished diplomatic relationships, but perhaps I am not updated enough and the embargo is so near to be over?

I know that ADIDAS is German brand, but it seems that he is promoting himself as a possible space for advertising of sport products, is that what is happening? why to do this at just 3 days the Pope arrive to America, is he trying to send a signal to the American Sport companies?

Does anybody know here if Fidel Castro has a contract as a Model with ADIDAS to advertise their brand track suites?

Perhaps the economy of the Island is so bad that he was forced to get a second job, even retired, and so sacrify his Ideological principles to get some extra euros to overcome the crisis?

Cuba has opened their resorts and tourist areas for European private investment since years ago, but supposedly in those areas Cubans can't buy or sell, is just for foreign tourists.

Why? Was he supposed to wear NIke or Reebok?

Fidel likes his track suits. Has for quite a while. It doesn't mean he has suddenly abandoned his communist ways.

It doesn't mean he has a sponsorship deal with adidas.

It doesn't mean he has a modeling contract with adidas.

It means he likes adidas track suits and clearly doesn't feel compelled to get dressed up for the Pope. Assigning any meaning to it beyond that is pure fantasy.

posted on Sep, 21 2015 @ 01:02 PM
link
He's old and in decline... this Pope isn't about pageantry anyway. The casualness might be very welcome as he prepares for the big-to-do he's in for when he gets to the US.

originally posted by: Indigent
He use adidas for years now, atleast since he had cancer.

You cannot be a good revolutionary now if you dont use adidas.


This shows the pope bump power, you people probably dint even remember Fidel was alive if not for the pope


All Day I Dream About revolutionS?

originally posted by: Lysergic
All Day I Dream About revolutionS?

Soviets. All Day I Dream About Soviets.

You know, what with them being a forgotten Communist dream.