Cosmological Calendar (or mythology):
The Taino mythology can be conceptualized in concentric circles, following with cycles of Yayael, Deminium and Guabayona. These three mythical cycles are numbered by three other circles. It begins with a double-opposition to the mythology.
The first one up-down versus down-out; the balance and the inbalance, the rebellious heroes, wiht their sacrifices or death versus the nature's rebelliion.
The second circle has the interiors from an astronomical-meteorological aspect against the solstice and equinox, the eras of drought and rain, elements integrated to the Taino agricultural cycle.
The third circle is divided in two great areas: Yocuhu, "the one is the sky" the masculine, close the segments of the "demis" circles; where the elements solar-drought versus Atabey, mother of the waters are found. The femeterrestral; marks the elements moon-aquatics. The union of these opposite sky-earth to the creation of the universe. The Being Hemaphodite, means "spirit, essence, and cause of life" A Being called Yaya. 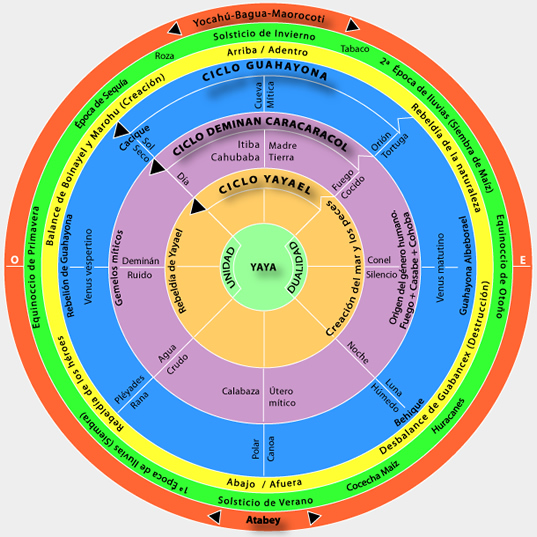 In the illustration every represented element has its symbol. It appears in the opposite side; but in the same axis.

Itiba (Cahubaba) mother earth-symbol of the interior equal to the mythic cave, the origin of the Tainos.

The marrow contains the bones of Yayael, another mythical knoll (where comes the sea, where Anacacuya submerge to give entrance to the Polar Star, and navigate in canoe which is the communication between the interior and exterior-the near-far.

To the rebellion of Guahayona associated to Vernus vespertine coinciding with the noisy races of Deminam and Yayael rebellion which are against the silence of the world Conel, to the sacrifice of the heroes to obtain the cultural wealth and the same Albeborael Guahayona, who is reborn as Venus matutine as a whale, the opposites reach the Taino. The Chief, solar symbol, day, dry, is oppose to Beiiique, moon, sign, night-wet.

Eliade says the labyrinth is a symbol representing an internal process and the steps to get to the center (the universe).

These Taino's labyrinth might be a representation of the mythological principles that we find in the human psyche.

Some of the Gods and goddesses:
-Atabey - Beginning of all the of the gods. "Mother of the waters", has control over all water bodies of the Earth. Mother of "Yocahú".

-Beyamanaco - Old god, Lord of the Fire. One of the dualities of Yaya (God). Yaya is the grandfather, illuminator and creator, Beyamanaco is a grandfather too, but constant fire that consumes everything in his path.

-Yaya - is the Great Spirit, the beginning, the giver of life, origin of the creation. Male because had a wife. Challenged by his son Yayael, Yaya kill Yayael giving origin to the seas and the fishes. Yaya cannot be defeated.

-Yocahú - lives in the heavens. Cannot be seeing. Has a mother (Atabey), but no beginning. Is the spirit of the "yucca", god of three pikes. His ritual name is Yocahú-Bagua-Maorocoti (meaning - Lord of the "yucca" and the water has no grandfather or masculine predecessor).

There is a lot more in the mythological universe of the taínos, so feel free to research.