Suicide rate in the military on the rise since 2005

we have no adequate support systems here. In America we use jail as our support system. Our mental health facilities are a complete joke. I got diagnosed bi polar disorder and put on meds that made my situation far worse and told to come back in 2 months. Then I went to the doc to try and get help and they turned me away and said everything is fine.

What we do for the honeless isn't working because they aren't getting proper mental health treatment.

What were doing for drug addicts doesn't work because it's a very lucrative market with big big big $$ in it because of insurance.

News flash, we have no support. The strong eat the weak and that's that period.

That perspective lacks so much insight he's incapable of educating you in a single thread enough to know why that's such a joke that he just resorts to calling you a troll.

originally posted by: MrSpad
It is pathetic in a serious thread you have idiots trying to bring politics into it. It is sickening. The biggest problem with Vets are the Vets themselves, getting help is seen a weakness. And being weak in the military culture is simply not acceptable. I can not count the amount of time young Vets come talk to me because they know me and my back ground and the biggest worry they have about getting help is being seen a weak. It takes some talking but, generally it takes a Vet to get another to seek help. How you change that culture I do not know. All I can say is if you have served reach out to those who are coming out now.

I understand where you are coming from.

However as a person who spent well over 50 years
in the military as a "family member",
I can tell you this is a recent phenomenon.

The lack of support while demanding more and more
with less and less from already overworked
and overtired military is a definite causation
of the current suicide rate.

Yes, politics are directly, as far as I am concerned,
the root cause of the extremely low morale
and the overwork of the smallest force
since before the world wars who are forced to participate
with little money and little support from the Commander in Chief,
in His wars,
not theirs but His,
because he could have pulled the troops out.

Obama demoralized the Christian military community,
which was an extremely large part of the force,
and has been punishing them for even the slightest
open mention of their faith.

He has also encouraged gay soldiers to be militant
and make rampant EEO complaints against
those who are uncomfortable with the idea.
This political agenda has further demoralized the troops.

As such,
I would not recommend that any Christian these days even consider joining the US military.

For certain if anyone is even the slightest (teensy weensy)
bit squeamish or reluctant about sharing a shower or tent
with a gay person they should not join the US military.

Also, they must not be reluctant to share a tent
with a member of the opposite sex
as my husband was forced to do many times
because the person who worked directly with him
was a woman and their job descriptions
required they share a tent in the field.
My husband did not like this arrangement,
especially as a married man,
but was forced to do it anyway under the
early years of the Obama administration.

Therefore, I say that anyone
who does not want to be forced to share a tent
with a member of the opposite sex,
even if they are married, should not join the military today.

Yes the suicide rate is directly tied to political decisions
made by Obama and supported by the Democratic party
in my opinion. I think you are wrong if you think otherwise.

The current force is demoralized,
exhausted and afraid to look at anyone "wrong"
for fear of a sexual harassment charge from the same or opposite sex.

Plus they know that in this political climate
they will be hung out to dry if they are injured
on duty by the VA.
Left to rot or die before receiving any treatment.


This is the US military of today:
with an administration who throws them away like broken toys;
who takes money and manpower away and expects more and more of them;
who refused to keep his promise to withdraw troops from what is now a 14 year war;
who is afraid to sneeze for fear of an EEO complaint, sexual or religious;
who is afraid of a sexual harassment charge while being forced to share a tent with members of the opposite sex and with gay persons, and are punished severely if they object or in even the slightest way express discomfort at the situation
And:
I do blame Obama directly and in my opinion the suicide rate is a result of these decisions he made regarding the military

posted on Sep, 20 2015 @ 05:12 PM
link
Certainly nobody can deny that services to Veterans have deteriorated, and are now inadequate to address the needs of our Vets.

The other inadequacy is modern medicine.
We have not yet found a medication or treatment that is sufficient or effective in addressing severe cases of combat PTSD.
Human beings shouldn't be exposed to those unforgettable crimes and traumas. It's very severe for many veterans, and we don't have a cure.

So what do we do that actually works right or the way it's suppose too?

So what do we do that actually works right or the way it's suppose too?


I guess that's sarcasm, I can't really tell. I mean - don't get me started on pharmaceutical corporations, I could stay on that soap box. But at the same time, SOME of that money we pay for medications is actually used for improving medications and research, so they are at least trying. Of course the real cure is not to send them into kill zones to begin with.

But the Veterans Administration is going to have to be better funded, and we have to face that, even if it means higher taxes. We will eventually have to put our money where are mouths are.

Why give any of these people money when we can give billions to DARPA to create #ty robot dogs a 12 year old could create on their own watching a YouTube video.

Why give any of these people money when we can give billions to DARPA to create #ty robot dogs a 12 year old could create on their own watching a YouTube video.

I have heard this sentiment before from others. I am not going to engage it. Pointless trying to define a "legitimate conflict".

However, I am not sure about the hero thing. I've only met everyday people regardless of why they ended up in those circumstances. Sometimes they do amazing things under extraordinary stress. Never once did I meet someone heroic just because they showed up.

posted on Sep, 21 2015 @ 06:54 PM
link
False flag wars tend to play on the conscience of those involved in them; be they directly responsible or mere pawns.

Here's how to go about it. Implement tougher screening practices.

When you have the majority signing up for benefits like the Army. The Marines not so much.

Bound to have people in there that don't belong. Of course one might be able to reduce those numbers, but they will never be eradicated completely.

Mental health issues effect every walk of life. Not just the military.

And I will say there is no endemic problem of suicide within the military it is just a microcosm, of a larger problem.

I have lost two people close to me from different sides of the family. Neither were military to suicide.

posted on Sep, 21 2015 @ 07:08 PM
link
are they all vaccinated? between that and the diet?? I battled depression for many years until I detoxed for another issue and started eating lots of raw greens...

originally posted by: Kandinsky
a reply to: DeathSlayer 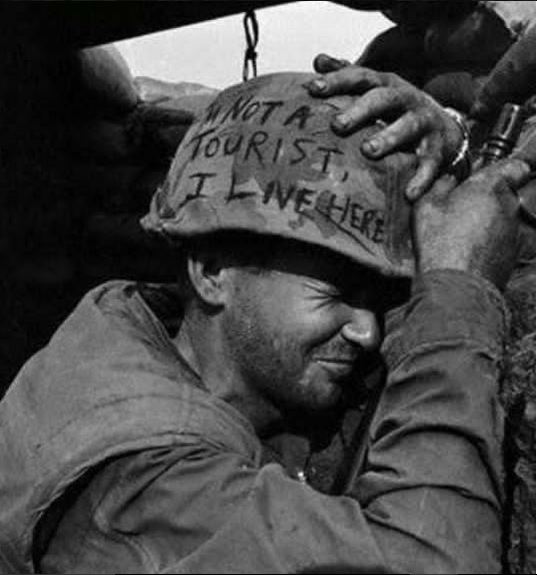 It's like some part of their headspace stays in the barracks and back in the conflict zones. Exposure to the highs and lows leaves a comedown that spirals into clinical depression and that soul-destroying isolation.

An end to war would be an obvious solution, but we have to be realistic - it's not going to end. Instead, lip-service and statistical studies should give way to full-spectrum support for the ones who can't cope.

well im haven't gone into detail with this Story.