That is the part that worries me the most, one thing is been spied on by the government and other having private companies with their own agendas with the right to do spying also.

I can never agree with that, I am sure that national security is not even half of the reasons for spying.

Any company in that business area has government fingers in it already, or is a puppet of the Government.

What you should be more afraid of, is what these Spy Agencies are able to pull off, Not-In-The-Name of the United States Government, but while completely run by them.

This is coming from the best 'persons locating' company in the world. That is now forcefully tied to the Government. Unofficially.
edit on 21-9-2015 by imjack because: (no reason given)

You know I always feel that America is run by two governments the government that people thinks they elect with all the hoopla and pony show for the entertainment of the masses every 4 years, and the shadow government that works behind the scenes, until this day still considered between the population as nothing but a conspiracy.

Well yeah they exist. My detail would be they are self-appointed in America, thus making the system impossible to trace. And completely fair to enter.

Knowledge is the only power that prevents it mostly. I managed to join the 'real' Illuminati online at 14. To even fathom that as a possibility suggests the people running the show, picked themselves. My silly dad thinking he's the first generation, because I got him annually invited to bohemian grove. I don't like to wear suits okay???

Even if 'the secret' is real or not, more or less my stolen version of it "Fake it, 'till you Make it" holds very true. I merely believe I already did things I want to. I believed we could profile everyone in the world. Even though it's 'almost there' I know just believing it is already will move it along fastest. Because I have things to work on, like what to do with the information of everyones profile.

Out first data crunches are going to try to identify TV viewers, as sex-offenders and sex-traffickers to help police matters. The USA already is exercising it to catch warcriminals.

originally posted by: imjack
a reply to: marg6043


I managed to join the 'real' Illuminati online at 14. To even fathom that as a possibility suggests the people running the show, picked themselves. My silly dad thinking he's the first generation, because I got him annually invited to bohemian grove. I don't like to wear suits okay???


And.....you lost me.....joined online huh? And been to Bohemian Grove with your dear Ole dad... well that's just creepy, especially more so being made up....

Why don't you back up why he wasn't the best choice for the job?


All this talk about how this nomination was political only but no one wants to back it up.

Born and raised in Kalamazoo, Michigan,[4][5] he graduated from Centerville High School in Ohio in 1986, after attending Cranbrook Schools in Michigan, and received his B.A. in history from Dartmouth College in 1990.[6] His interest in government and politics began when he participated in the 1988 New Hampshire primary contest.[7]


In the 1990s, he was on the staff of the House Armed Services Committee and later a special assistant in the Immediate Office of the Secretary of Defense. He later served as associate director of political affairs at the White House.

He also worked at Business Executives for National Security, a Washington, D.C.–based think-tank and at Robinson, Lerer & Montgomery, a strategic communications firm in New York City.

He served as deputy undersecretary and deputy chief management officer for the Department of the Navy beginning in July 2009. He was also deputy director of the Commission on the Prevention of Weapons of Mass Destruction Proliferation and Terrorism.[8]

He is the highest ranking openly gay member of the Department of Defense.[6] He was a member of the Gay & Lesbian Victory Fund from 2004 to 2007. He favors the adoption by the U.S. military of a policy prohibiting discrimination on the basis of sexual orientation. He has said: "I personally like to see these things in writing and codified." He has expressed a preference for the establishment of such a policy by the Department of Defense rather than the Obama administration: "My view about government is you should always use those resources that are available to you first before you move up to the next level, so I think there are a number of things we can do inside this building for the Department of Defense". He supports allowing openly transgender persons to serve in the military as well.[7]

Seems to be more than qualified / competent.
edit on 21-9-2015 by Xcathdra because: (no reason given)


originally posted by: neo96
a reply to: Vasa Croe


Ok....so is this solely a political move for BHO

NOTHING the president does isn't without political gain.

I have nothing against that guy at all, but I really do think he got the job based solely on his sexual oreintation.

I mean look at his appointments elsewhere. Not a single one that was qualified.

Biden is apparently running now too. So Biden will throw off the Hillary vote and allow Sanders to win...

Dunno bout that prolly looking at a Biden CLinton ticket with Sanders getting Sec State.

We won't have much of a military left by then.

Neo, Neo, Neo... I have loved debating you in the past while citing sources... Something I've never seen you do by the way! Why must you fall for the right/Left divide and conquer tactics? Is it not obvious at this point that a cruel trick has been played upon us all and continues to this day? Please open your mind.

posted on Sep, 21 2015 @ 07:57 PM
link
We should just assume anyone who gets a job that is not a straight white male was some sort of an affirmative action hire...just no WAY anyone else could be qualified...

Ok....so is this solely a political move for BHO?

But what's worse: Nominating someone for political reasons, or disliking the nomination because of their sexual orientation?

originally posted by: introvert
a reply to: Vasa Croe

Ok....so is this solely a political move for BHO?

But what's worse: Nominating someone for political reasons, or disliking the nomination because of their sexual orientation?

I guess that would depend on if there was someone more qualified or if the decision was made because of anything to do with his sexual orientation.

I would say making a decision on who to nominate and even having this as a consideration would be just as bad as not nominating someone based on sexual orientation.

Trouble is, we will never know.

Was asking if anyone can show why he should not have got the nod.

It's easy to find someone more qualified "on paper".

As the argument with Common Core - - - passing a written test doesn't mean you are qualified for the job.

We don't know what they were looking for, but not everyone has the ability to be an administrative leader.

Leaders need special qualities. Not just a list of accomplishments.

I never said I had been. My point was, the members are so self appointed,

after I joined and suggested my dad go, he was invited, inducted, and still in disbelief himself I'm even in the Organization.

Only old people believe the myth you can't join online.

So you can join this secret organization that is controlling the word online?

What a world we live in.

originally posted by: imjack
a reply to: Vasa Croe

I never said I had been. My point was, the members are so self appointed,

after I joined and suggested my dad go, he was invited, inducted, and still in disbelief himself I'm even in the Organization.

Only old people believe the myth you can't join online. 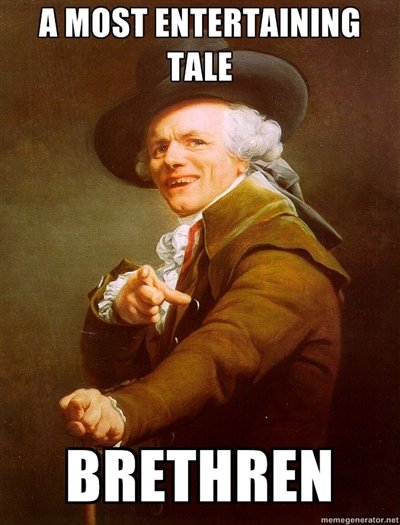 Meme's be my languague.

So you can join this secret organization that is controlling the word online?

What a world we live in.


At 14 was what blew me away. There are also females.

To be fair, the online community is better at controlling the world than 'main faces', and they still aren't doing a good job.

Countries and stuff wouldn't matter at this point if they were 'on track'.

'Earthling' might as well be the project name. The point is unity, and it seems desolate notions stem from perpetual misinformation. At least they aren't the group that want to blow the world up. I mean, handcuffs suck though,

My guess is they try to look bad on purpose.

The most common mistake I see, is associating them with trying to maintain an elite status. They are trying to eliminate status. You already have to be elite to join. But online, you don't.
edit on 21-9-2015 by imjack because: (no reason given)