posted on Sep, 18 2015 @ 08:59 PM
link
This article is intended as a rebuttal to Sanders comment that the U.S. was founded on racist principals.

The following article by Ben Shapiro counters the idea that somehow socialism is beyond racism. ( we won't bother with the most racist of them all...The national Socialist party of Germany)

Considering it was written five years ago.

Socialism does indeed produce racism as we have seen that play out with the Martins, and Ferguson's.

Magnify an age old problem in to sensationalist proportions to push that age old agenda of failure.

The left does want us to be more like Europe. They gots massive problems with the biggest one being a big case of XENOPHOBIA from them middle easterner's coming over in droves.
edit on 18-9-2015 by neo96 because: (no reason given)

Yes, the European Union members are re-building fences at their non-existent borders.

The left also offers 'open borders' for the U.S.. That'll sure get jobs back for unemployed workers....

Let's start with the fact that the Nazi's (National Socialists) weren't socialist. Go.

Five years old and has 0 comments. Shame I was looking forward to what anyone thought about the article but I guess no one cared to leave a comment.

originally posted by: Kali74
a reply to: nwtrucker

Let's start with the fact that the Nazi's (National Socialists) weren't socialist. Go.

How can anyone miss that ?

It's spelled in it's name.

originally posted by: Swills
a reply to: neo96

Five years old and has 0 comments. Shame I was looking forward to what anyone thought about the article but I guess no one cared to leave a comment.

Was there a point ?

Have anything to say regarding the article other than 'no comments'?

An article from a right wing site trashing the left and accusing racism to be a by product of socialism, what to say? Shocking? Enlightening? Or a hit piece against socialism and the left based on a soccer players experience?

I dunno, I'll stick with racism being taught and I'll blame the parents, culture, community before I blame a political and economical policy.

3NL1GHT3N3D1
+13 more
posted on Sep, 18 2015 @ 09:28 PM
link
Lol, this is so stupid. Socialism doesn't cause racism anymore than Democracy does. Every country has its racists regardless of what type of government is in place. People are the cause of racism, not any particular type of government.

This just sounds like another reason to hate on Bernie, nothing more nothing less.
edit on 9/18/2015 by 3NL1GHT3N3D1 because: (no reason given)

Capitalism requires individual responsibility and accountability. People are seen as atomized units in a capitalist system -- they are either useful or they are not. They are not seen racially or ethnically or religiously. They consume and they produce, and those are their only relevant characteristics.


Was it the socialist that came to the government crying bail us out because our pyramid scheme collapsed? No it was the banks and their right wing lapdogs mainly in the White House that cried give them tax payer money. So much for the individual responsibility and accountability huh?
The rest is let's face it total nonsense because he doesn't even bother point out what kind of socialism he is even talking about because there are many different kinds.

This is for the op.


This article is intended as a rebuttal to Sanders comment that the U.S. was founded on racist principals.


In no way is this a rebuttal because the article talks about present day America nothing about the founders is even mentioned.

Also making a Nazi reference about someone whose family was killed by Nazis is pretty sick.

posted on Sep, 18 2015 @ 09:30 PM
link
Did bernie sanders claim that socialism does not have racist people, cause i havent seen Or heard him say anything like that.

Or is it Just more personal opinions by the right.

Oh it's in their name? Well of course they must have been socialists. No.

National Socialism (German: Nationalsozialismus), more commonly known as Nazism (/ˈnaːtsɪzᵊm/), was the ideology and practice of the German Nazi Party and of Nazi Germany as a whole, although it is sometimes applied to other far-right groups. Usually characterized as an offshoot of fascism that incorporates scientific racism and anti-Semitism, Nazism arose from Pan-Germanism, the Völkisch German nationalist movement, and the anti-communist Freikorps (Free Corps) after World War I.

Nazism subscribed to theories of racial hierarchy and Social Darwinism. Germanic peoples (called the Nordic Race) were depicted as the purest of the Aryan race, and were therefore the master race. Opposed to both capitalism and communism, it aimed to overcome social divisions, with all parts of a homogeneous society seeking national unity and traditionalism, and what it viewed as historically German territory as well as additional lands for expansion[clarification needed].

The term "National Socialism" arose out of attempts to create a nationalist redefinition of "socialism", as an alternative to both internationalist Marxist socialism and free market capitalism. The Nazis sought to achieve this by a "people's community" (Volksgemeinschaft) with the aim of uniting all Germans as national comrades, whilst excluding those deemed either to be community aliens or "foreign peoples" (Fremdvölkische). It rejected the Marxist concept of class struggle, opposed ideas of class equality and international solidarity, and sought to defend private property and businesses.

The Nazi Party was founded as the pan-German nationalist and antisemitic German Workers' Party on 5 January 1919. By the early 1920s, Adolf Hitler assumed control of the organization and renamed it the National Socialist German Workers' Party (Nationalsozialistische Deutsche Arbeiterpartei, NSDAP) to broaden its appeal. The National Socialist Program, adopted in 1920, called for a united Greater Germany that would deny citizenship to Jews or those of Jewish descent, while also supporting land reform and the nationalization of some industries. In Mein Kampf, written in 1924, Hitler outlined the antisemitism and anti-communism at the heart of his political philosophy, as well as his disdain for parliamentary democracy and his belief in Germany’s right to territorial expansion.

This country at it's founding was racist and void of socialism. So what happened there???

You people are so predictable. Did we really need another topic about this same thing???

Guess I am the only one who remembers this: 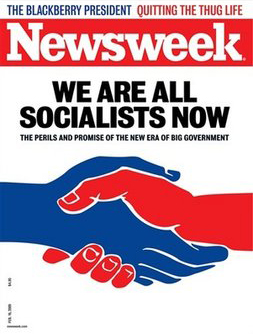 Then not long after that America is 'racist' ad infinitum.

For those who are trying to dismiss the op.


This is for the op.


This article is intended as a rebuttal to Sanders comment that the U.S. was founded on racist principals.


In no way is this a rebuttal because the article talks about present day America nothing about the founders is even mentioned.


That and the article is 5 years old so is the OP saying it's an article written to counter Sanders is it an article the OP's uses counter to Sanders?

What exactly is this article rebutting? Sanders was talking about our racist roots, which still grow strong but clearly not as bad as each generation passes. But i don't recall him talking about socialism = no more racism. He talked about racism in America and if anyone thinks there isn't any they're clearly delusional.

Europe is it's own beast and it's really not a fair comparison of the two.
edit on 18-9-2015 by Swills because: (no reason given)

Hmm, used union members to intimidate their populace. Their leader made arbitrary decisions without any further gov't mechanisms, treated a religious sect 'poorly', cough, cough., Ran an immense propaganda machine/media that vilified it's opposition. Promoted race problems amongst it's citizens.

If Socialism represents Republicans and Democrats shaking hands as represented in that cover, I'm all for it. The biggest problem our country faces is the left vs right paradigm. It has divided the country in half, that's never a good thing.

Do you think the Democratic Republic of Vietnam was actually democratic, too?

Looks like the OP is in election mode as well. Hope you're getting paid at least

Well, finally a point we can agree on racism is taught. It can also be promoted and has been for the last number of years.

It sure the heck hasn't been coming from the right. Try checking out how many Black leaders are getting completely fed up with the race gambit. A daily occurrence if one checks more than MSNBC.

The article does point out an interesting fact that there is in fact much more tolerance than given credit for in the U.S..
It also points out that socialist environments also have racial issues. A fact that merits this article.

Playing the race card has been a last resort gambit of the left when faced with failing policies and a likely defeat in the next election.

Sanders 'sounded like he had some decent ideas, until he played the race card yet again...

Yes he's slicker than Trump, but then he should be, he's a career politician. Both flirt with truths for the purpose of tapping into the emotion out there. Both then skirt any real solution.