(Video) Man Struck By Lightning Twice almost back to back and walks away.....WHAT?

posted on Sep, 18 2015 @ 08:27 PM
link
Personally I'd say it's real.
Look at the road where we was struck.
That's piss when he involuntarily lets go when the strike hits.

posted on Sep, 18 2015 @ 08:33 PM
link
I saw this video about a year or so ago on another forum, someone posted the original video without the lightning, it is just a video of a drunk guy that can't keep his balance. I'll try to find the original.

He must've pissed of Zues!

originally posted by: UKWO1Phot
Personally I'd say it's real.
Look at the road where we was struck.
That's piss when he involuntarily lets go when the strike hits.

If it is real, I don't think that is piss. That is more likely the burnt ground where the lightning left his body.

originally posted by: Majestic Lumen
I saw this video about a year or so ago on another forum, someone posted the original video without the lightning, it is just a video of a drunk guy that can't keep his balance. I'll try to find the original.

Yes, please do....that would put an end to this being real or not quickly. If edited, that was a great job!

I wouldn't say it was that great. This is nightvision: that stuff is sensitive. You can barely see the "lightning strike" in the footage. Normally a lightning strike leaves a lasting afterimage, just like in your retinas, as the CCD in the camera was overloaded and has to clear out extra charge.

Both 'lightning strikes' are conveniently centered.

The shadow of the van is unaffected by the presence of the lightning.

In the second strike, the man doesn't seem to cast a shadow beneath him as if lit from above.

The shadowed parts of the trees are also brightened and the under-lit leaves on the trees stay under-lit and brighten. Hence brightening was applied evenly to the whole picture, it was not from a new light source such as lightning.

There were also other conductors around, many higher than the person. Why did he get hit and they not?

Can't say for sure but I'd call fake.

posted on Sep, 18 2015 @ 09:46 PM
link
Off the topic of the actual video I was checking in to what lightning does to a human body when it hits and found this pretty interesting.....it can, and I guess usually does, leave a "lightning-like scar known as a Lichtenberg figure". Here is a picture of one.....probably one of the most interesting things I have ever seen from a natural occurrence. 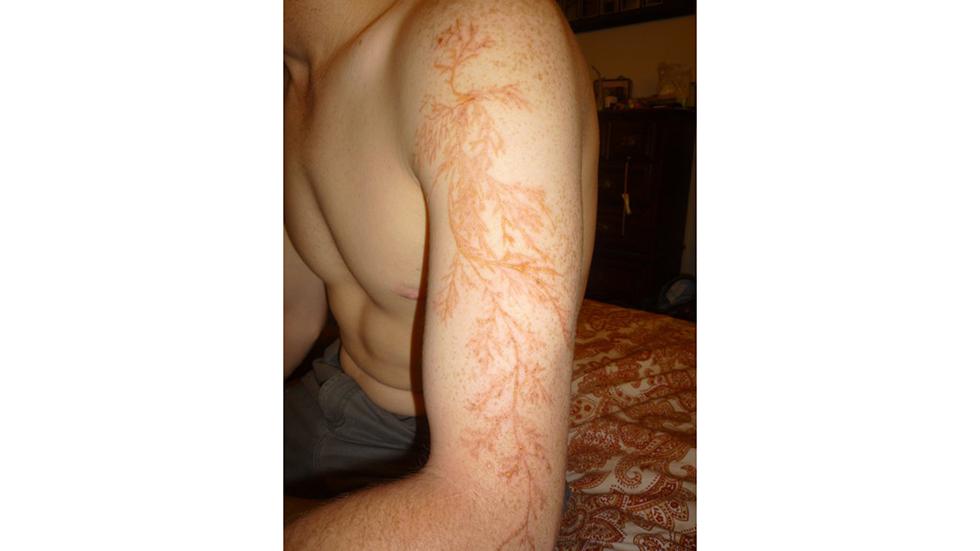 originally posted by: AshOnMyTomatoes
a reply to: Vasa Croe

I wouldn't say it was that great. This is nightvision: that stuff is sensitive. You can barely see the "lightning strike" in the footage. Normally a lightning strike leaves a lasting afterimage, just like in your retinas, as the CCD in the camera was overloaded and has to clear out extra charge.

That was my initial thought as well which is why I made screen grabs of the moment of the strikes and posted them. The actual instance of the strike is quite bright, and the reflection of the first strike can be seen on a car passing by in the cross street ahead of the guy getting struck. I would think if faked, that would be an easily missed piece, or something that someone using CGI would not necessarily have thought to put in to this, unless things like that are "auto-added" when a light source is added in via whatever CGI software that would cause the surrounding picture to show reflections or the like.

I know when I was doing 3-D animation I could do that, but it was only on a scene that I created entirely, it would not add it in to a part of a picture or anything else I dropped into the scene.

originally posted by: stormcell
I'd say fake. I'm sure the flash would completely white out the CCD sensor of the camera. Amazing how the lightning is perfectly caught even with a camera that is sensitive enough for night vision.

I have to agree. it seems too setup.

poor bugger if true though, needs to buy a lotto ticket.

Should we not see the leaves and limbs moving from the occasional gust of wind?

originally posted by: intrptr
a reply to: Vasa Croe

Good thing its on video, nobody is ever going to believe that.

I don't post for a day or two and everyone's stealing my material...

I've seen lightening strikes before where a number of people simply dropped like a sack of spuds. and that wasn't as potato as this video

Now THIS is a lightning strike!!

Am I evil because I busted up laughing, one time when I was maybe fourteen years old my father was listening to Christian talk radio he's a huge Christian, anyway this guy calls the station and I'm not sure if it was a prank or what, but it sounded serious.

so the guy basically tells the Christian radio hosts, that he has bolts and plates in his head and that he gets struck by lightning all the time even in his own home sitting of the couch watching t.v ,he was crying out to the guys asking why! Why does God do this to me?

So at this point I'm in the passenger seat laughing my ass off even my father can't help but laugh, so the guy goes on to say the first time he had been struck by lightning was when the power went out as a child and his mother kicked his ass to get outside to the breaker box, and he was struck by lightning and cracked his head so now he has metal in his head, and he thinks that's why lightning is even getting him while on the couch or in bed at night.

Suffice to say the Christian talk radio guys were in way over their heads, and just told him to keep praying, they couldn't offer any practical advice for the lighting guy, oh I wish I could find a recording of that on the e bet it was so #ing funny. Anyway cheers

I remember an incident on Half Dome, Yosemite Park. The article I found includes the member that fell to their death, but leaves out that one survivor recalled momentarily glimpsing the arc of lightning branching from mouth to mouth of his mates. Probably because of dental work.

Am I going to hell because I laughed out loud when he got hit the second time?


originally posted by: stormcell
I'd say fake. I'm sure the flash would completely white out the CCD sensor of the camera. Amazing how the lightning is perfectly caught even with a camera that is sensitive enough for night vision.


Not only, but dude gets up… twice.

I have read a few stories of people being struck multiple times in their lives. There is some park ranger I read about a while back that had been hit 7 times....Roy Sullivan. Sad thing is he ended up killing himself later in life.

These numbers do not quite apply to Sullivan, however, who by the nature of his work was more exposed to storms than the average person. Virginia, where he lived, averages 35 to 45 thunderstorm days per year, most of which fall in June, July, and August. Between 1959 and 2000 lightning killed 58 people and injured at least 238 people in Virginia. In the United States, 3239 people were killed and 13,057 injured by lightning in the same period. Most of those were males between 20 and 40 years old caught outdoors


Too dumb to come in out of the rain. I know, there was more to it than that. Some of his encounters were strikes on something nearby that branched or forked to him, passing through him from an extremity to ground, missing his heart. Magic Roy… if you hear thunder and see him running, duck for cover.

The guy in the video is supposedly struck on the top of the head, the lighting surging through his body to ground. The "burned pavement" at his feet belies that he would have been cooked like that, too.

I saw a squirrel get zapped on a power pole once, there was this bright flash with thunderclap, and a smoke trail to the ground of fricasseed squirrel, cooked through and through.

If your whole body is bridged in a bolt of lightning, your done.
edit on 19-9-2015 by intrptr because: spelling

posted on Sep, 19 2015 @ 08:47 AM
link
This is a fake, but true story I knew a guy tripping on being a teenager who climbed an electrical tower, touched a coil, and got electrocuted with i think like 100k volts falling 60ft into a small pool of water.

The electricity missed all his internal organs but scarred 60% of his body. Dude has freakish genetics and today is a crazy crossfit guy that can push press 315lbs over his head. People are insane.
edit on 19-9-2015 by pl3bscheese because: (no reason given)