Professor Robert Walsh urges scientists to take the threat of an impending apocalypse seriously - because look what happened to the dinosaurs. 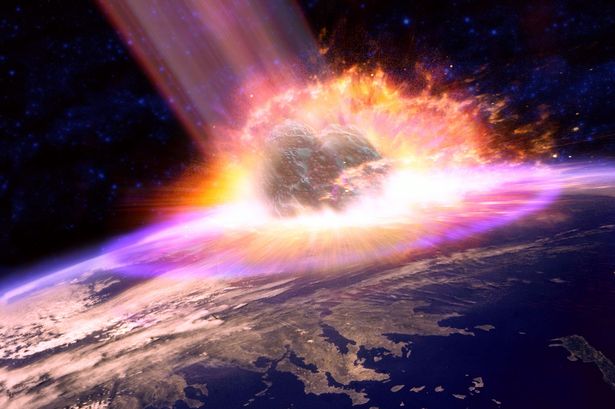 A research expert insists the world could end soon because of a catastrophic meteor impact - despite NASA's reassurances. Conspiracy theorists say it's time to say bye-bye to our loved ones as they claim Earth's final day could come anywhere from the 22 to the 28 September .

They predict a plethora of horrors will ravage the planet including meteor strikes, earthquakes, tsunamis - with some suggesting they will be sent by God. However, Nasa says it is constantly monitoring the heavens for signs of any incoming asteroids and has given the all-clear.

The article also tried to counter his idea by saying that Nasa could not miss an Asteroid that big coming towards us, which i agree:

The international astronomy community is taking seriously the slim threat of a devastating collision with asteroid. In April 2015, an international conference organised by the European Space Agency brought together several scientific disciplines (including astronomers, physicists and engineers) to debate and role-play the possibilities around dealing with an Earth directed asteroid collision.

NASA indicates that if there was any object large enough to do the type of destruction in September indicated by claims across the blogs and web postings, we would have seen it by now.

NASA’s Near Earth Object office at the Jet Propulsion Laboratory is at the forefront of what is now a worldwide collaboration to watch the skies for any asteroids that could do harm to our planet.

Their “Spaceguard” programme detects and tracks these objects as well as trying to determine their nature; such as what is their mass or what could they be made of.

Do you think we will be hit soon? If an Asteroid doesn't kill us, i'm pretty sure humans could do the job:

If you watch the known asteroid paths on space weather, they are always posting a day or two after a close one goes by, one they did not see until it missed us. That is normal.
edit on 17-9-2015 by Darkblade71 because: (no reason given)

I remember at one point the big complaint was that they couldn't monitor all of the sky so they were constantly warning that a catastrophic meteor could sneak up on us with little to no warning.

After 2012, those complaints died out of media.

So I am left to wonder, was it just a fashionable thing to scaremonger about or did they actually get enough funding to cover more of the sky?

As to whether or not we're all getting wiped out next week ... ummm, I just have a hard time seeing that but so might NASA and that's the worry isn't it?
edit on 17-9-2015 by ketsuko because: (no reason given)

posted on Sep, 17 2015 @ 04:48 PM
link
With all the amateurs out there searching for, tracking & cataloging these things, too, I very highly doubt we're going to be caught with our pants down on an incoming ELE rock. If this thing's trajectory hasn't changed in a manner alarming enough to make the hobbyist astronomers poo their pants, then case closed -- it's over-hyped.

Edit: To quickly clarify, something along the lines of Chelyabinsk could happen, coming at us in the Blind Spot, so to speak. But something large enough to pull off ELE would surely have been spotted at some point during our annual trip around the sun, too.
edit on 9/17/2015 by Nyiah because: (no reason given)

Vasa Croe
+22 more
posted on Sep, 17 2015 @ 04:52 PM
link
Honestly it doesn't really matter. There is no use worrying over something that is an ELE. If it is coming we will all be dead anyways and there is absolutely nothing at all anyone can do about it. I'd personally rather not know other than the fact that if it was I would want to be with my family and not at work or something. I would rather be surrounded by those I love and be able to reassure my kids that I am there.

I don't want to die, but if it happens, it happens....not going to waste my time with maybe's. As others have said, there are plenty of eyes in the sky and someone would have seen it coming by now.

(post by ElectricDipole removed for a manners violation)
Vasa Croe

originally posted by: Darkblade71
The reality is that we could get hit by a huge asteroid at any time without warning.
They miss them going by all the time.

If you watch the known asteroid paths on space weather, they are always posting a day or two after a close one goes by, one they did not see until it missed us. That is normal.


The other reality is that they HAVE hit, so it isn't like it is unprecedented. Like you said...could happen at any given second.

posted on Sep, 17 2015 @ 04:55 PM
link
As much as I think the idea is hogwash, I like this article. It goes to a fairly decent length to effectively disarm the theory while remaining palatable to the general public. It also puts a good amount of context into the amount of fascination in dooms day scenarios, and why humans are fascinated with it. One thing I'd like to point out is that Professor Robert Walsh does not explicitly say that there's any chance greater than what is considered normal. His response is not the same brand that the article initially hypes it up to be and in fact is very down to Earth and logical in his comments.

Didn't everyone miss the one that hit Russia not too long ago?

please dont souce from the mirror's website, its like weekly world news, a lot of pi*h, its a wonder why bat boy hasnt featured in this yer

Not even close. Of course, nobody saw the Russian meteor coming…

Thing is a planet killer with our name on it would have been picked up on by a plethora of "experts" by now.

Didn't everyone miss the one that hit Russia not too long ago?

Yeah, but ones of that size are small. We're talking ones that are big enough to produce bigger result than lots of broken windows.


But something large enough to pull off ELE would surely have been spotted at some point during our annual trip around the sun, too.

Wonder if we could turn in some frequent flier miles and take a vacay somewhere..

posted on Sep, 17 2015 @ 05:07 PM
link
An asteroid large enough to cause an ELE or most of what people are doomsaying about would need to be large: 2 or more miles in diameter.

The ones that get missed, as people in the thread have pointed out, are tiny. They are quite small in comparison to a ELE sized asteroid, and yes, are hard to spot, and sometimes not seen until after the fact.

Good news about those are: they are not big enough to cause an ELE.

Bad news is there are still very distructive if they were to hit, and could still cause a large loss of life and damage.

But they won't end the world.

posted on Sep, 17 2015 @ 05:24 PM
link
While I will admit there is a TON of folks out there watching the skies, not just for asteroids, but for UFOs and just simple oh wow look at the nice night. I do have to point out, it's a very, very ,very big sky and we're looking for rouge balls of rock / ice that have a chance of hitting us.

I do recall a few so called " sweet spots " we cannot see. It's size that is our biggest enemy here, since we don't need a planet sized rock to hit us for a problem, we just need one the size of car for a nuke type event, imagine how hard that would be to detect, most asteroids are not reflective, meaning if it isn't breaking up, shooting off gas, or having a certain mass to it, we'd not really see it coming, till it was almost here. Size would be the biggest factor here, anything smaller than 1 km is harder to spot.

Most of the survey efforts have been very successful in finding the largest asteroids (about 90% of the near-Earth objects larger than 1 km in diameter have been found), but there is still a lot of work to be done with finding and tracking the smaller objects.

Humans are insanely notorious at overlooking issues and not paying attention to detail. Our cockiness and arrogance will be our eventual downfall. Sadly it will not be us as a whole making such a boneheaded move, but a small group if not just one man, not going in for the second glance.

posted on Sep, 17 2015 @ 05:26 PM
link
Amazing how many people (even on this thread) like to reassure themselves of a safe existence by pointing out "the experts" would surely have noticed a threat to said existence by now. Fallacy much?

There are literally zillions (yes, that is the the technical term) of objects flying around our solar system of various sizes. Some are really big and "the experts" are pretty confident about them:

However, the smaller ones are where the trouble is. They are really hard to detect much less track. The window of warning could be very small. They might not cause an ELE on Earth but they would defiantly bring a world of hurt to a given area if the approach is right. The long term empirical evidence demonstrating this certainty is unassailable.

I have no clue on this particular object as I am not "an expert". Yet I am not going to feel smug over some NASA public affairs filtered reassurances my tax dollars are well spent at their fine agency.