posted on Sep, 17 2015 @ 12:19 PM
link
Okay, The Catholic Church is allowing priests accused of sexually abusing children in the United States and Europe to relocate to poor parts of South America. I thought the pontiff was cracking down? Needless to say, that wont fly! Seek and destroy... I'm glad some eye's are being directed on these monsters. Just because they are sent to poor South American country's, don't make it right. Alright, Reporters followed five priests in these countries: Paraguay, Ecuador, Colombia, Brazil and Peru. One priest who relocated to a poor area in Peru admitted on camera to molesting a 13-year-old boy while working in Jackson, MS. Another is currently under investigation in Brazil after allegations arose that he abused children living in an orphanage he founded there. Above the law?

In the U.S., Catholic leaders have come under intense pressure for concealing priests’ sex crimes, and for transferring perpetrators among parishes rather than turning them over to law enforcement. The scandal has cost the church billions of dollars and led to a sharp decline in new clergy. In response, in 2002 U.S. bishops approved a “zero-tolerance” policy, under which priests who molest children are no longer allowed a second chance to serve in the clergy. Victim advocates say that relocating priests to poorer parishes overseas is the church’s latest strategy for protecting its reputation.


“As developed countries find it tougher to keep predator priests on the job, bishops are increasingly moving them to the developing world where there’s less vigorous law enforcement, less independent media and a greater power differential between priests and parishioners,” said David Clohessy, spokesman for the Survivors Network of those Abused by Priests, or SNAP. “This is massive, and my suspicion is that it’s becoming more and more pronounced.”

What? according to SNAP, they " (bishops find it tougher to keep "predator priests" on the job so they move them) That's the total opposite of their zero tolerance policy Here are the absconders.

• Father Carlos Urrutigoity, accused of sharing beds with and fondling teenage boys in Scranton, Pa. The bishop of Scranton called him a “serious threat to young people,” but in Paraguay, reporters found him leading Mass in a major church. He had been promoted to second-in-command of the diocese of Ciudad del Este.

• Father Francisco “Fredy” Montero, accused of abusing a 4-year-old girl in Minneapolis, Minn. He relocated to his native Ecuador, where he was placed in a succession of remote parishes — despite a dossier sent by the Archdiocese of Minneapolis to his new diocese, warning of Montero’s past.

• Father Paul Madden, who admitted molesting a 13-year-old boy on a mission trip when he was stationed in Jackson, Miss. The diocese paid the victim’s family $50,000 and Madden moved to the diocese of Chimbote, Peru, where he still celebrates Mass each week. 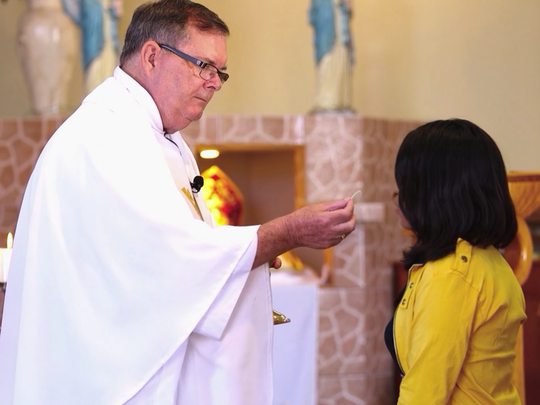 • Father Jan Van Dael, accused of molesting several young men in his native Belgium before moving to northeastern Brazil, where he started an orphanage for street kids. Van Dael is under investigation by Belgian and Brazilian authorities after accusations of abuse arose in Brazil, too.

• Another priest we tracked down, Father Federico Fernandez Baeza, was indicted by a grand jury in 1987 on two second-degree felony charges of indecency with a child.

Father Federico and his handlers are real winners.... no! they are not for those that don't read sarcasm. lol Goes on to say

A family in San Antonio, Texas accused Fernandez in a civil lawsuit of ritually raping two brothers over a two-year period. Prosecutors dropped the criminal case after the diocese of San Antonio reportedly paid the family more than $1 million. Fernandez flew to Colombia, where he continued a high-profile career in the church. We traced him to the city of Cartagena, where he’s a senior administrator and priest at a Catholic university. After consulting with Fernandez’s office, university guards prohibited us from entering the campus, and Fernandez has not responded to requests for comment.

Move along, Nothing to see. Maybe a lynch mob, when these villagers find out about their beloved priests? and...

The priests told us they have been allowed to continue preaching unfettered, without facing internal investigations, despite Pope Francis’ pledges to clean up the church. Last year, the pope sent a letter to every bishop in the world, ordering them to follow a global “zero tolerance policy” on child abuse. This year he created a commission tasked specifically with protecting children from church sex abuse. Following repeated phone calls and emails, both the Vatican’s press office and the head of the commission, Cardinal Sean Patrick O’Malley, declined to provide comment for this story.


And the Vatican gives the same old move along BS

So, is it alright that they get relocated after a guilty trial here in the states? Or no trial, for that matter. The Vatican is probably to big and mighty to have this scar them though? Right? I mean we can trust in Cardinal O’Malley’s commission to do the right thing, cant we? You can check out the Source For some more reading and a little video of the investigation.

I say we send those particulars to Antarctica where the temperature is as cold and frigid as their hearts.

originally posted by: olaru12
Why in the name of all that's holy are American priests exempt from the laws the rest of us have to adhere to?

They're not. What I find disturbing (besides the molestation), is that the Catholic church is somehow allowed to pack these guys off to other countries. I understand that the church is buying families off with money if they don't testify, which happens in other types of cases as well (ala Michael Jackson), but there has to be something that can be done to keep these guys from carrying on.

Why is the RCC allowed to throw money at people, and then take these criminals out of the country?

This is one of the major reasons why I turned my back on Catholicism and Christianity.
edit on 17-9-2015 by starwarsisreal because: (no reason given)

ya no wonder! It's a very disgusting problem these, so called godly? holy? men have.

I'm not surprised,If they went to prison they might get their comeuppance. An eye for an eye, a buggering for a bugger...

Those accused cannot hide anymore, This is no longer a world where gods word alone carries any credence. Those responsible have to face court, and unlike their courts of the past there is a jury of peers.

ya they need to go to jail. Not in their rooms at the Vatican, awaiting trial as this late priest did. Jail just like you and me, right?!

The Catholic church use to castrate young boys for their choir, I think now they should castrate these priests, then they can send them to South America..

posted on Sep, 17 2015 @ 04:04 PM
link
a reply to: C21H30O2I
It looks like business as usual. They used to do that on the reservations. If there was a problem priest they'd be moved to another reservation. Or if there was one in a white church the Indians would be forced to endure him when he was moved onto their reservation. The church has been doing this for a very long time. It's not just the catholics, either.

ETA: It was worse in the "residential schools" where they were often sent. You should hear the horror stories involving rape and molestation.
edit on 17-9-2015 by Skid Mark because: (no reason given)

Thanks! The Catholic church... Not much, nothing for that matter, makes me physically sick when seeing or hearing about something nothing, except I find this turning my stomach! They are a disease and we need a cure..

That in today's world is unacceptable. In any world any time! They need to be swiftly dealt with till their end. Easier said than done?

posted on Sep, 18 2015 @ 08:16 AM
link
The chur h higher ups that are covering this up also need to be prosecuted, there are as bad as the offending priests.

They sure are! The ups, should be charged with the same crimes no? I mean If I am with a person, say at a store and they rob and kill a clerk, You can bet even though I didn't pull the trigger, I go to jail for murder. Works the other way too. If the clerk kills my partner, I get the murder charge too. No difference to me. I'm sure the child victims feel similar?
They at minimum should get charges of Aiding and abetting a criminal to further their criminal activities??

posted on Sep, 18 2015 @ 08:32 AM
link
Hopefully, somewhere in South America, somebody is sitting down and reading the ATS board and recognizes that new priest that showed up at their church.

That would be great. I guess going to jail would be a good thing for them. I'm sure mob justice in some South American areas can be brutal...No less than what them children went through.