Let's just say that if some guy offers you 72 virgins if you do what they tell you then you KNOW they are a scammer and a con artist.


originally posted by: woodwardjnr
I think it shows the manmade nature of most religions. The men usually end up on top...

I am going to start a religion where the women are on top.

Dude, give em an inch and they'll take a mile... you do realize that, right?

Are you insulted by my question?
Does my objective position to the subject warrant your attitude?

And no Muslim believes it.

Only western fools believe it.

I'm just not convinced that middle easterners are any more derogatory towards the female form than us westerners. Despite what the MSM would have you believe.
edit on 17-9-2015 by Subaeruginosa because: (no reason given)

I apologise if i wasn't clear but i didn't mention Middle Easterners. I was not stereotyping a whole nation of people, i stated "extremists and other such people" and that is a direct quote. Again i apologise if you misinterpreted it was not meant to come across that way 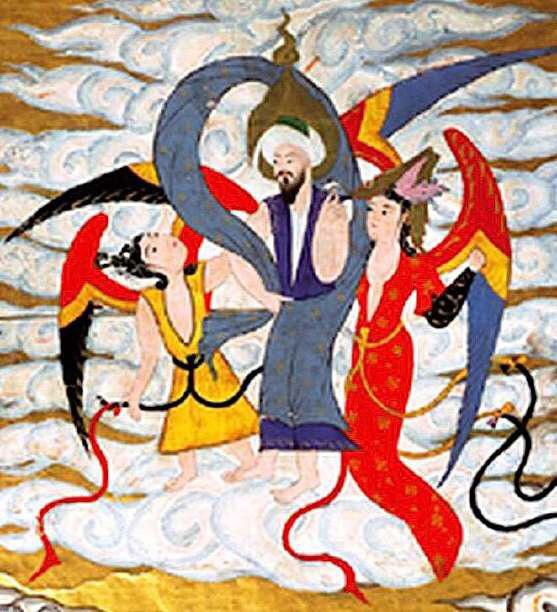 The "72 Virgins" of Heaven are not human, but are, instead, beautiful beings called Houri. They are perfect companions, specifically created for the enjoyment of humans in Heaven. Houris have many enticing descriptions, and will actually be companions to all inhabitants of Heaven, not just the slain soldiers.

Well, if your putting white Christian fanatics and middle eastern Muslims fanatics into the same category, then I totally agree with you, 100%.

But, if your trying to claim that middle eastern Muslims are some how more delusional than white Christians (which is what your thread appeared to instigate), then you would be a fool, who has been totally hoodwinked by the MSM.

originally posted by: Michet
There's a raisin why Angels are virgins!

Who would have thought?

A dried grape is the reason Angels are all virgins.

Ooooh, good one Agustus! Could be demonic beasts?


its most likely 72 boy virgins. - All the other virgin morons that blew themselves up thinking that they will be brought to paradise

They really don't say what sex or type of animal would be virgins. If they're supposed to be women virgins, what about the Muslim women who commit suicide? They're screwed.
edit on 17-9-2015 by WeRpeons because: (no reason given)

You my friend read to deep into things. There was no other intention to my post other than gaining a better understanding. This was never about Black, White, Asian or Aliens regardless of what you may think not everyone likes to catagorise. I was enquiring why "extremists" ie. People of a specific faith who rape, pillage and terrorize would think such a reward could be bestowed on them and how. Instead of trying to place me in the category of a "Bigot" you could have taken the route Sahabi took and provide me with information that not only answers my question but is completely objective in doing so as i was attempting to be.
Honestly there is no need to make a big deal out of a simple question.

Women who enter Paradise will be restored their youth and virginity, as the Prophet, sallallaahu ‘alayhi wa sallam, said: “…Old women will not enter Paradise… when Allaah The Almighty admits them to Paradise, He will make them virgins.”

According to some traditions, the women of this world in Paradise will be far more beautiful than the Hoor because they worshipped Allaah The Almighty. Ibn Al-Qayyim, may Allaah have mercy upon him, said, “It is prohibited for any man in Paradise to come near the wives of any other man therein.”

Interesting.. who wants to regain their virginity to serve men? Islam is a religion for male enjoyment..
Also all unmarried women will have male human in paradise, because there is more females than males in paradise some men will have more wifes than they had when living in earth.

Well, maybe my guards just up and I'm being far to defensive.

But after listening to the news all day and hearing about massive protests by a bunch of red neck fools, who're opposing a new mosque in an inland Australian town, I've just had enough of the ignorant BS!

I mean, I'd actually agree with them if they where also protesting against churches... but these nitwits are just fine with churches, its just mosques they apparently have the issue with. How feeble minded is that?
edit on 17-9-2015 by Subaeruginosa because: (no reason given)

posted on Sep, 17 2015 @ 10:34 AM
link
Yet no one bothered to answer to Charlie?Why is that?Is it maybe because it destroys the point you are trying to make?
Charlie I praise you,whenever I read a biased post about Islam,I just can't wait for you to weight in and enlighten these ignorant fools(although you are mostly ignored because your answer don't conform to the "bash Islam fest" going on).

originally posted by: CharlieSpeirs
It's a myth.

And no Muslim believes it.

Only western fools believe it.

Religion is the biggest myth in the history of the known world.

Sorry Charlie, but the 'west' is not your enemy.

The Prophet Muhammad was heard saying: "The smallest reward for the people of Paradise is an abode where there are 80,000 servants and 72 wives, over which stands a dome decorated with pearls, aquamarine, and ruby, as wide as the distance from Al-Jabiyyah [a Damascus suburb] to Sana'a [Yemen]" ~ Sunan At-Tirmidhi, 4:21:2687

Abu Umama narrated: "The Messenger of God said, 'Everyone that God admits into paradise will be married to 72 wives; two of them are houris and seventy of his inheritance of the [female] dwellers of hell. All of them will have libidinous sex organs and he will have an ever-erect penis.' " ~ Sunan Ibn Maja, Zuhd (Book of Abstinence) 39

originally posted by: Sahabi
The "72 Virgins" of Heaven are not human, but are, instead, beautiful beings called Houri.


Wait a minute, someone else just said it's a myth, so which is it?

Somebody needs to make one of those State Farm commercials just for religion...


I emphasize this fact since many pudic and embarrassed Muslims claim there has been a mistranslation, that "virgins" should be replaced by "angels". In sura 55 verses 72-74, Dawood translates the Arabic word " hur " as "virgins", and the context makes clear that virgin is the appropriate translation: "Dark-eyed virgins sheltered in their tents (which of your Lord's blessings would you deny?) whom neither man nor jinnee will have touched before." The word hur occurs four times in the Koran and is usually translated as a "maiden with dark eyes".


originally posted by: thomadom
So here goes.. If it's accepted that extremists and other such people will be greated in heaven by 72 virgins, where do they get these virgins?
In a culture where it is acceptable to rape, abuse and keep women as sex slaves how can there possibly be any virgin women left?

Where does it say that these 72 virgins are all going to be women?

First written by someone who lived 200 years after Muhammad passed away...

Ask yourself why it took so long to be recorded, if he was "heard saying" this in the 600s but no one thought to share it until the 800s?