Land of the Free = Biggest Threat to World Peace!

posted on Sep, 15 2015 @ 12:52 AM
link
The people were polled and they resoundingly agreed that the U.S. was preventing the rest of the world from existing in peace. I'm not all that surprised when you take into account the perennial war we've been at for the past decades. But what would I do to get us back on track as a leader of the Free World and not a bad cop with a score to settle? Find out today on this latest episode of Off the Grid.

oh yeah, and it's an extra bonus if there's oil in the land that "needs to be democratized".

If we did not do anything and stayed isolationist as suggested in the founding of our country.
Who would be the big boogy man today?
Would it be Japan, or Germany? Maybe Saudi Arabia?
I could go on, but really none of us know where we'd be without the moments that make up history.

I did fail to see in the video a solution to anything.
What is your solution?

I guess it's in the way that 'you' take action, combined with an obscene and anti-social military expenditure.

Oh, I know, I'm an idealist, but imagine the world if all the military budgets were channelled into social good!
In this matter, it's a global problem, and frankly I'm not sure how to fix it given the investment.
Sure, it's not just a United States of America problem, but they are the main protagonists.

There is another way, but no government seems brave enough, sadly.

I do not take action. I did not follow my family into military service.
If we channeled the military money into only social good, we would have more terrorist attacks to pay for.

I do not see the US of A as being a protagonist. We have our extremists as do most countries, but I cannot think of a war in my lifetime we have instigated (34 years).

True, we have a war crimes court but its only certain people, many could be excused for fighting for their country, its just they aren't using a gun for the 'right purpose, ' in Western Heads of States/countries opinions - albeit one supplied by them nevertheless!

All sides commit atrocities but unless 'unlucky' (used in the worst sense of this word) they don't get caught or made examples of, they get away with their torture and viscousness.

The media uses e.g. heinous acts by ISIS, though to instil fear in us all and of course motivation for money to fly from the banks and our tax revenues into the armaments and other related industries, especially of the West.

While I applaud the fact that you have chosen not to support the Military Industrial Complex, can I have your thoughts on the instigators of the recent Afghanistan and Iraq wars and the reasons they were fought?

There are other ways. Nobody (Government) is brave enough to try them.
It's a crying shame.

Don't forget crimes against US citizens as well, with 9/11.

Yesterday I took a taxi driven by a Syrian and our discussion was very interesting.

Naturally Shiloh is very curious and wants to ask about what is going on in Syria from a Syrian's perspective rather than our own media's political one. His family live in Aleppo so they are within the war zone. He phones them regularly.

He didn't know what to make of ISIS except that it was being funded by a third party and not a genuine cause.

He completely blames the USA for what is happening in Syria.

He confirmed Assad, although Alawite so Shia, was elected fairly and he, sunni was OK with that. I found that very interesting, but of course the Assad's had ruled for 30 odd years and Syria was once a nice country to live in. (Our media never states Assad as Shia, only Alawite, so of course clouds began to clear somewhat for me (who had never had cause to look up which branch of Islam Alawites come from).

He didn't agree with Netty's complacency that Israel was safe from ISIS and also wouldn't trust it not to supply ISIS.

He thinks Saudi is completely run by the USA and they direct ME policy through Saudi as a puppet state along with Qatar etc.

He said his family copes lving in Syria because Mother, sisters and a brother, have a number of houses so when the fighting gets bad they simply move.

He didn't like Wahadism because of its restrictions which he felt were too harsh. Although brought up as Islamic he was not especially religious. He made the point that Syrian women were clever and considered better workers than the men.


He felt that America's idea of getting rid of Assad was very bad and they had no right to interfere in Syria because the people in Iraq now wish Sadam had never been deposed and in Libya the people there were beginning to wish Gaddaffi had not gone. Interestingly he didn't appear to link any other government's eg. the UK's with American policy/actions.
It was just the USA he blamed and thought it motivated for greed.

I asked if he thought Saudi wanted to rule the Islamic world and he couldn't conceive of this. It appeared to somehow be against his interpretation of Islam.

He also said that its against Islam for a man to leave his wife for over 3 months. A complete No No. Yet the majority of married refugees have obviously done this. (I won't go into the numbers thing when they want to import their full family members after having settled in the West as some countries allow this, others don't, its another topic).

He was very polite, pleasant and easy going I didn't ask anything emotive as that would not have been fair or right.

His comments were interesting and it was good to actually hear from a Syrian about Syria.

posted on Sep, 15 2015 @ 02:43 AM
link
There is already a HUGE thread here regarding this exact thing. As usual, your a little late Jesse, er whoever posts for you
ATS POLL: Which Country Represents the Biggest Threat to Humanity?

He referenced a 2013 poll, and then it was only 24%. 2 years later and a poll on ATS has that number doubled (not to mention lots of great pages to read)

posted on Sep, 15 2015 @ 04:59 AM
link
I think it's time to admit that freedom drones and democracy missiles do not create peace and instead create more chaos and death.

Apologies to you InnerPeace, Absolutely right and people are dying from that despicable, cowardly act today still due to the pollution in their lungs. Innocent citizens from all countries are always dispensable when it comes to the elite manipulating their policies to feed their greed.

Unfortunately all our countries have now been infiltrated by these psychopaths and their dirty deeds but I hope people will reconsider their reaction to their own governments trying to convince them into backing acts of war, especially when their own country itself is not being threatened - that is the key to understanding policy is not being carried out to keep them safe.

Perhaps the Department of Defense should stick to "defense/defending" and NOT "offense/offending" ?

This is why, in My opinion, George W. Bush did more for the DEFENSE of our country during the Vietnam war than if He actually left the U.S. He was here to DEFEND it and not off doing OFFENSIVE maneuvers in S.E. Asia.


Now hold on before You think I'm a big NUT, I also think one of the Washington D.C. politicos that should KNOW that "War is Hell" is John McCain but He wanted war in Iraq, Afghanistan and Syria and lied to get US involved.
Mr. McCain would be a 'good' candidate for the aforementioned Department of Offense. 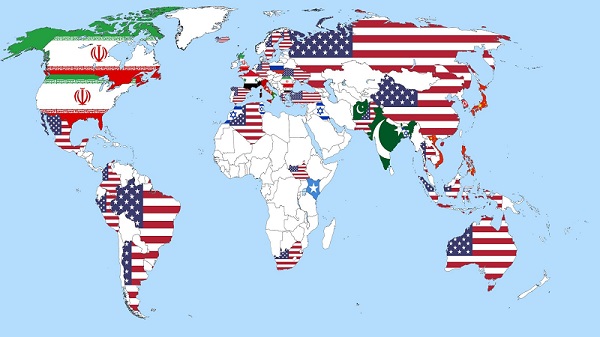 I'm interesed in your graphic, can We have the source please?
Thank you!