What's the difference between Homo Naledi and Homo Floresiensi ? 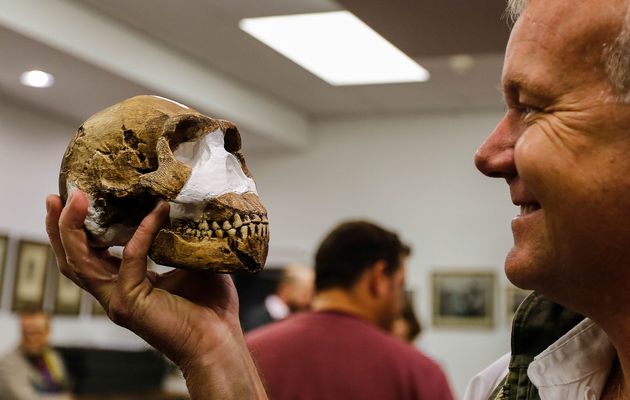 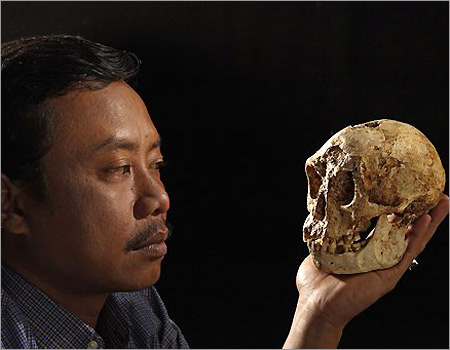 Interesting times indeed, I personally have no idea about the difference is between the two, but I am certain that our history we have been taught is certainly about to be rewritten.

What makes me say this? Just look at the smile on the guys face holding the Homo Naledi skull says it all..

Man am I glad to be alive. How exciting?

The two skulls look completely different. Are you saying there's some kind of resemblance?

According to the wiki for homo naledi, the fossil has not yet been dated so we really do not know how long ago they lived. It looks like this discovery is still a work in progress. I can't wait until more details come out.
edit on 10-9-2015 by Barcs because: (no reason given)

posted on Sep, 10 2015 @ 10:49 AM
link
Homo Floriensis was a dwarf version of Homo Erectus caused by an island habitat of limited resources.
Homo naledi is a normal sized descendant of Australopithecus Afarensis and is apparently, the first Homo ancestor from which all following Hominins are descended.

So Homo naledi is the link between Australopithecus and Homo Habilis, which up to now has been missing 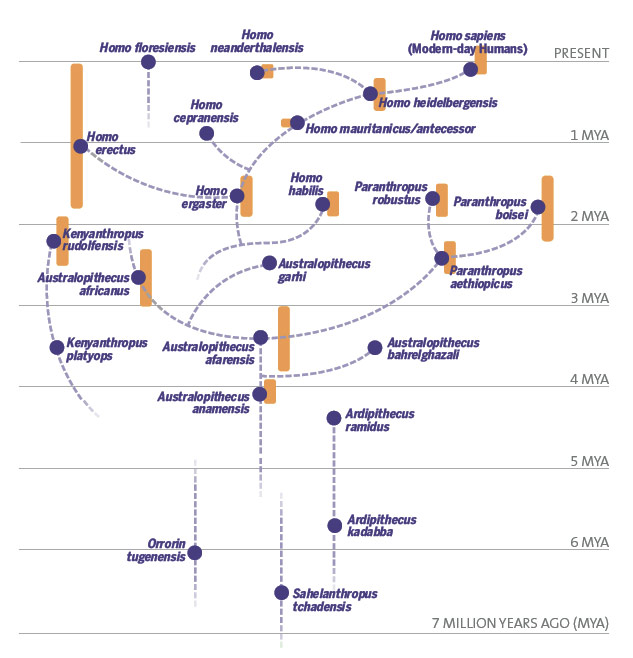 Not sound like I am being a smart a## here but about 2.4 million and change years of adaptation and evolution... I see lots of difference between the two skulls. Homo F has a much higher cheek bone line and shorter jaw, whereas Homo N has a much more pronounce brow ridge and longer jaw, also I notice the orbital areas of the skulls show several differences, I suspect that Homo N had better eyesight given these differences. Makes one wonder what the actual living environment was like for the two at the times they were alive, that would be the real tell all.
edit on 10-9-2015 by sycomix because: (no reason given)

Hey wait a second, i dont think we are completely sure, that Floresiensi was nothing more than the result of a genetic disorder combined with a small population and inbreeding.

Like Astyanax said, the skulls are completely different. I have zero degree in anthropology, but from what I see:

There are a few other things, but I'm too unknowledgeable on the terms to want to risk looking like an idiot pointing them out

originally posted by: Marduk
So Homo naledi is the link between Australopithecus and Homo Habilis, which up to now has been missing

Could be...Could be the missing link between them. No point in jumping to conclusions just yet.


originally posted by: Marduk
So Homo naledi is the link between Australopithecus and Homo Habilis, which up to now has been missing

Could be...Could be the missing link between them. No point in jumping to conclusions just yet.


But if I jump to a conclusion now, I get to say "I told you so later" but if I'm wrong, I can pretend I was hypothesizing.
A plan with no drawbacks.

originally posted by: Astyanax
a reply to: Ove38

The two skulls look completely different. Are you saying there's some kind of resemblance?

Yes, the small brains and small bodies, the braincase of Homo naledi measures just 560 cubic centimeters in volume, the recent Homo floresiensis has an even smaller brain.


Personally, I think you're missing out on the bigger picture and larger ramifications of this find. Instead of saying to yourself "well this guy is kind of small and so was Floresiensis, what is the connection between the 2?" when the real question should be "How does this new find tie in with what we already know about hominid evolution as a whole? What similarities and differences are there over all and how exactly does this fit into the picture as well as enhance that picture?"

It seems as if you've latched onto the size and ignored everything else pertaining to these remains. There are some very interesting aspects regarding H. Naledi, particularly involving its bipedalism. The flared shape of Naledi's pelvisis consistent with Australopithecine pelvis' over all and the leg, foot and ankle bones are more similar to those of the genus Homo. Interestingly, this contrasts with evidence that Naledi was an excellent tree climber as shown by their long, curved fingers.

There are so many aspects of H. Naledi that one doesn't need to create one such as your compare and contrast exercise with Floresiensis to find something interesting here. Was that the entire basis for your comparison? The size? Because that's pretty much where the morphological similarities cease to exist. Vastly different jaw protrusions, the types of teeth are differnet, brow ridge is extremely different, occipital bun...different and on and on. Even the average cranial capacity is different and HF is actually smaller than that of H. Naledi. I'm just not seeing the similarities you are alluding to.