Important Fossil Discovery at the Cradle of Humankind

Important Fossil Discovery at the Cradle of Humankind

Hi all, just thought it would be interesting to keep up to tabs on the latest from the Cradle of Humankind, they are about to make an announcement on the discovery of a new fossil at the cradle of human kind.

There have been three important discoveries at the location as well.


The most important fossil discovery made to date at the Cradle of Humankind World Heritage site in Maropeng will be revealed on Thursday.

The University of Witswatersrand will be unveiling the largest assemblage of hominin fossils on the African continent.
Among those expected to be present for the big reveal will be Deputy President Cyril Ramaphosa, Wits Vice Chancellor Adam Habib, Environmental Affairs Minister Edna Molewa and acting Gauteng Premier Lebo Maile.

According to the team of international and local scientists who have been working on the project, this discovery is going to force the world to re-think what it means to be human.

As usual, I do not expect anything really extraordinary, will be interesting nonetheless. Will try to keep you up to date, but there is a live thread available here externally.

Well, after the press conference this is the first news source I could find.

Hehe, Yes like I said, it wont be something that would change the lives of us normal folk.

I suppose it is all about creating hype, and it tricked me, I am already planning a trip (trying to convince my girlfriend) to go there next Sunday to see what they found

Quotes from the press conference so far:

"It will make a momentous impact... Globally, says Habib."

He says: Two years ago I received a phone call, it was from Lee Berger. He told me I have made a significant find and I want you to support it. It is moments like today that make it all worth it."

"Reporter Alex Eliseev tweets - Prof John Hawks from the US: This is the most exciting thing I have ever seen in my career."

I think that there has been no news in a fee years, so they 'invented' some news.

Any idea if the sell fossils of any kind? I'm hoping to add to my collection again.
edit on 10-9-2015 by IndependentOpinion because: (no reason given)

A new species, or an old one assembled wrongly lol

I think that there has been no news in a fee years, so they 'invented' some news.

Any idea if the sell fossils of any kind? I'm hoping to add to my collection again.

Well there is of course competition to stay relevant.

A new species, or an old one assembled wrongly lol

haha, lets see what time period, it appears it is a specie that burried their dead.

Gosh why is Cyril Ramaphosa making this announcement, surely there is someone more qualified?

Who knows, maybe he has some slice of that pie also....

Who knows, maybe he has some slice of that pie also....

Well he used to be in an industry that would attempt to hide such discoveries as much as they can.

Looks like they have an actual scientist talking now about the discovery, a mass grave perhaps?
edit on 10-9-2015 by kykweer because: (no reason given)

Apparantly they found 15 skeletons of various ages.
edit on 10-9-2015 by kykweer because: (no reason given)

originally posted by: boymonkey74
I hope it is a new one to add to our marvelous family tree .

From the live feed
10:45 - I am pleased to introduce you to a new species of human ancestor. We have called it the homo naledi - LB

originally posted by: boymonkey74
I hope it is a new one to add to our marvelous family tree .

Still swinging from that same tree!

It will be interesting to see if it is possible to access the burial area without artificial lighting and ropes, which may shed light on exactly how technologically capable these hominids were.

The comment about 'forcing the world to re-think what it means to be human...' along with the artwork makes the agenda so obvious it's almost comical.

Another huge red flag: just like countless other finds, the discoveries always focus on the artist's renderings, instead of the actual discovery itself.

The whole thing smells just like another Piltdown event. 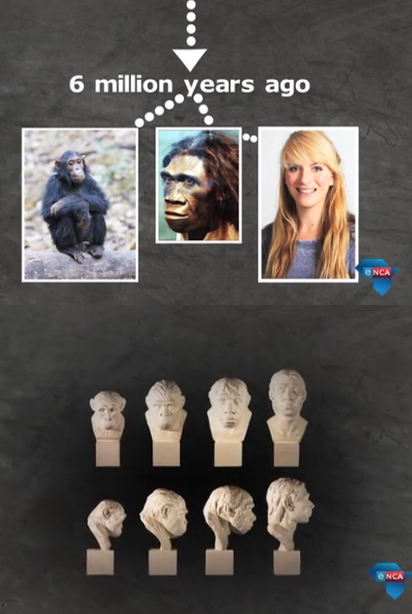 posted on Sep, 10 2015 @ 03:59 AM
link
"The hands are more humanlike than Australopithecus. Their hips are like those of the famous Lucy skeleton. "

"It was clear the legs and feet were used for long distance walking, says researcher"

Well, after Piltdown, I am sure any such claimed discoveries will be put increasingly under the microscope, either way, the truth will come out.

Unless, what you decide the truth is, is already decided beforehand, then it is best to stay clear of new discoveries.
edit on 10-9-2015 by kykweer because: (no reason given)

posted on Sep, 10 2015 @ 04:24 AM
link
What I find suspicious, is why would they announce this fossil discovery if they have not even dated them yet? Wouldn't that make it more impressive?

"Due to the fact that the fossils were found in isolation, it has also been difficult to determine the actual age of the fossils, because no accompanying plant or animal fossils could be measured for dating."

"The team of scientists is still working towards measuring an accurate date after three different methods of dating failed."

This bit is very interesting.

The Homo naledi people appear to have carried individuals deep into the cave system and deposited them in the chamber - possibly over generations.
edit on 10-9-2015 by boymonkey74 because: (no reason given)

I wonder if they all went into the cave to hide from something and all died because of asphyxia?