Hanger bay in the sky.

posted on Sep, 9 2015 @ 02:18 AM
link
Let's start by saying I'm not smart or stupid I've served 5 years in the U.S.N and 9 years as correctional officer.
I've seen some strange things while in the navy, but the strangest had to be while I was in roving patrol going around my max security unit. It was around 11 pm one night I was smoking a cigarette when I looked up I seen a big rectangle lite up that looked just like a hanger bay door opened on the flight line at night from about a mile away. Now I've seen and been around aircraft most of my life and I know what an aircraft hanger looks like especially at night but how in the hell was in the sky I stopped in the middle of the road and watched for about 5 minutes, nothing came in or went out and you could see clear sky all around the open bay. Then gradually just like a hanger door it closed but not like 2 doors coming together but one door sliding right to left the it was clear and you could see the stars just like nothing was their. And the answers are no never touched any hard drugs so I know it's not flash backs.
So I'm just checking to see the theories out there thnx.
edit on 9-9-2015 by dick7704 because: Forgot to add I wanted theories. First topic.

So you quit the drink when you left the navy...

But you said this happened while you were IN the navy. The fact that you quit seems to be largely irrelevant to the issue therefore! Is that not so?

Apologies sir... It appears that you had this experience when on patrol as a corrections officer. Disregard my inattentive response above.
edit on 9-9-2015 by TrueBrit because: I am trying out Moron for the day. It doesn't seem to fit quite right!

What was it like inside?
Could you make out any distinguishing features?

Was it lit up? Was it metallic?

Did the door make any noise when closing?

That was an interesting video for several reasons. First, in the initial views, it seems to clearly be triangular in shape which is in keeping with those craft seen at lower altitudes in the US and UK. Second, your positioning of it pathway across Australia surprisingly has it moving very closely over the area of Australia where the US has a secret base, supposedly, some say, for triangles.

The characteristics of the objects motion tend to indicate what it is not. It is moving too fast to be a distant comet or asteroid. It is moving too slow to be a typical, low-orbit satellite, aircraft or near-earth meteor. Of course, being a sky watcher, you knew all of this already but many will not and lacking commentary from your video, they will have to consider the possibilities both within conventional and more exotic explanations.

posted on Sep, 9 2015 @ 12:50 PM
link
I wonder if it somehow houses the Black Triangles, and the "clear" nature of it visually might suggest an active camouflage of some sort.

This could be what Astro was talking about last summer. The Naval involvement made me perk up a bit as well.

Were you looking through glass of some sort? 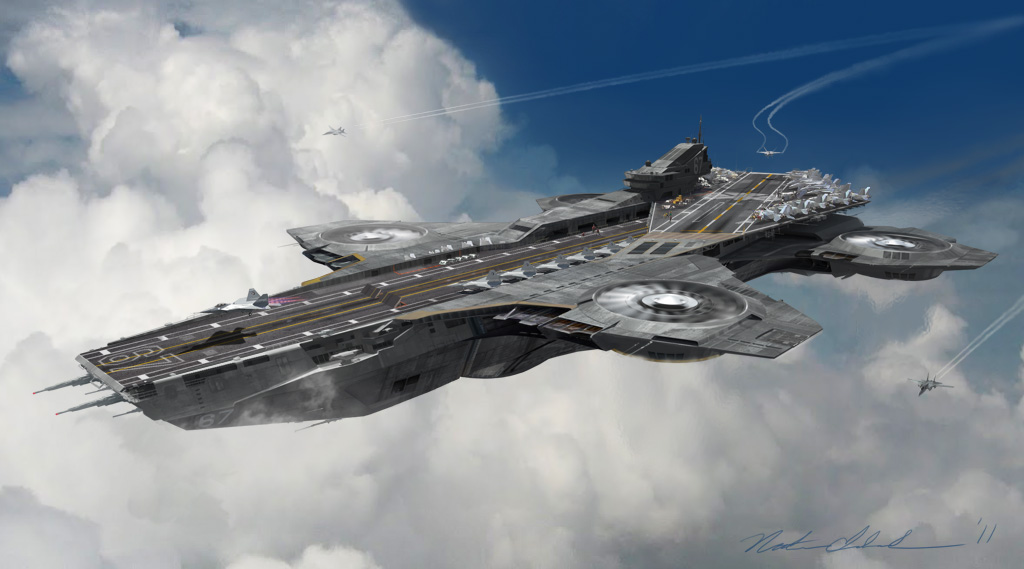 Very interesting for sure

I dont remember him talking about carriers.... chevrons, sure i.e. pheonix lights, but carriers?

posted on Sep, 9 2015 @ 06:43 PM
link
no I stopped the car and got out to make sure what I was seeing was real. No obstruction in view and a clear night. About about 300 to 500 ft above the ground. We have fields all around the unit for agriculture but no trees.

posted on Sep, 9 2015 @ 06:49 PM
link
Couldn't see in it was above about 300 ft up and no noise it was clear skies around it looked like a lit up rectangle. An aircraft hanger at night with all lights inside on and your looking at it from across the flight line and 300 ft up.

I dont remember him talking about carriers.... chevrons, sure i.e. pheonix lights, but carriers?

Hanger bays are found on aircraft carriers. I spent a lot of time in them.

Apparently, they're also found a couple hundred feet up in the sky, too.

Weird story... if one isn't convinced high tech secret craft exist, that is.