The Baltimore City Department of Transportation would like to advise motorists that heavy traffic is expected in downtown Baltimore on Wednesday, September 02, 2015. Heavy vehicular and pedestrian traffic may occur downtown throughout the day, especially in areas surrounding Baltimore City Circuit Court and City Hall.

Motorists traveling downtown on Wednesday, September 02, 2015 are strongly advised to be prepared for traffic congestion and delays. Temporary traffic stops and lane/road closures may be implemented at any time in the downtown area if necessary.

Commuters are strongly encouraged to avoid Calvert Street south of Lexington Street and use alternate routes away from this area. Parking will also be restricted along portions of Guilford Avenue, Calvert, Lexington and Fayette Streets on Wednesday. Motorists should pay close attention to posted parking restrictions in the vicinity of the courthouse.

Citizens should stay tuned to local news media and social media sites for traffic updates throughout the day.

So...do people not work in Baltimore or something?

Anywho....I see some more civil unrest coming for B'more tomorrow....this will likely be a big media circus for them and we all know how bad everyone wants to be on the news right?

Good luck Baltimore.....you are going to need it I think....

posted on Sep, 1 2015 @ 01:45 PM
link
I'd give the whole city a wide berth tomorrow.
This is a very emotionally charged topic and trouble won't be confined to the area around the court house. They'll have cops everywhere around there and those who want to make trouble will pick a place far from them.


Anywho....I see some more civil unrest coming for B'more tomorrow....this will likely be a big media circus for them and we all know how bad everyone wants to be on the news right?

Good luck Baltimore.....you are going to need it I think....

I hope they can keep their protest civil and peaceful. or better yet, protest by not showing up at all to show there is some modicum of faith left in the judicial system.


tivists plan to protest at the courthouse and elsewhere in the city as hearings begin Wednesday in the case against six Baltimore police officers charged in Freddie Gray's arrest and death.

Prosecutors and defense attorneys are set to argue whether Judge Barry Williams should dismiss the case or recuse Baltimore State's Attorney Marilyn J. Mosby. They also will discuss whether the six officers — who have pleaded not guilty — will be tried separately or together.

The attorneys are then set to argue whether to move the case out of Baltimore at a second hearing scheduled for Sept. 10.

"Our message is pretty obvious. Do not drop the charges. No change in venue. Do not recuse Marilyn Mosby," said Sharon Black of the Baltimore People's Power Assembly, an organization known for its protests against alleged police brutality. It is planning the demonstration at the downtown Circuit Court.

"Our demands are pretty simple. We want to keep the attention on those three issues."

So a "People's Power" group is putting this together and making demands on the city.....I don't recall any group with the name "Power" in it ever working out in the past.....


So...do people not work in Baltimore or something?


Who would imagine any of them having a day off or from people outside of the area being the cause of the congestion!

Why do you think there is going to be civil unrest for the start of the hearing?


People have a "right to protest," Smith said, and police in the area will not be wearing riot gear.

Interim Police Commissioner Kevin Davis said at a Monday night public safety forum that he hosted with Mayor Stephanie Rawlings-Blake that police "will treat a protest like a protest and a riot like a riot" and that officers "can't afford to get those two mixed up."

Smith said police are asking for the public's help in keeping the peace. "People who want to exercise their rights to protest are fine, and we recognize that the protesters are different from those people who cause public safety concerns by their actions," he said.

The force has about 3,000 officers. Police do not release details about the staging or deployment of officers.

As of Monday afternoon, more than 350 people had indicated on the Power Assembly's Facebook page that they planned to attend the protest at the courthouse.

Black said the event will be peaceful but that activists will not be cowed by the "militarization" of police or any "disconcerting" attempts to interfere with their First Amendment rights to assemble and speak their minds.

"It's not going to have a chilling effect on us as activists in terms of protesting," she said. The group plans to protest "as close as we can to the door" of the courthouse, she said.

So the police are announcing they will not be wearing riot gear, but in the same breath states they will treat a riot like a riot....that just seems odd and like it is inviting something bad to happen.

Then the spokesperson for the "Power" group says they plan on getting as close to the door as they can?

So no riot gear would mean they will be holding off the protesters with simple barricades in front of the courthouse I guess?

Anywho....this just seems like a mess that is about to happen.

posted on Sep, 2 2015 @ 09:35 AM
link
Already have some interesting things going on in B'more....reporters are saying they are being shoved and one protester was hit by a car...this is gearing up to be another conflict.....

Video from a reporter there where the guy was hit....can't embed as it isn't on YouTube.


A judge in Baltimore handed prosecutors two pretrial victories on Wednesday in relation to the Freddie Gray case, a 25-year-old man who died after suffering injuries in police custody.

NPR's Jennifer Ludden reports that the judge rejected a motion to dismiss charges against six police officers who were allegedly involved in Gray's arrest and death. And the judge also dismissed a motion that sought to remove Baltimore State's Attorney Marilyn Mosby from the case.

Wednesday was the first day of hearings on the case. It's been a day marked by protests and tension in a city that saw days of protests and one night of riots following Gray's death.

Do you want there to be conflict?

Some shoving and a car accident isn't all that much.

originally posted by: Sremmos80
a reply to: Vasa Croe

Do you want there to be conflict?

Some shoving and a car accident isn't all that much.

I would rather there wasn't, but the police (whom stated they would not be in riot gear) are already in riot gear..... 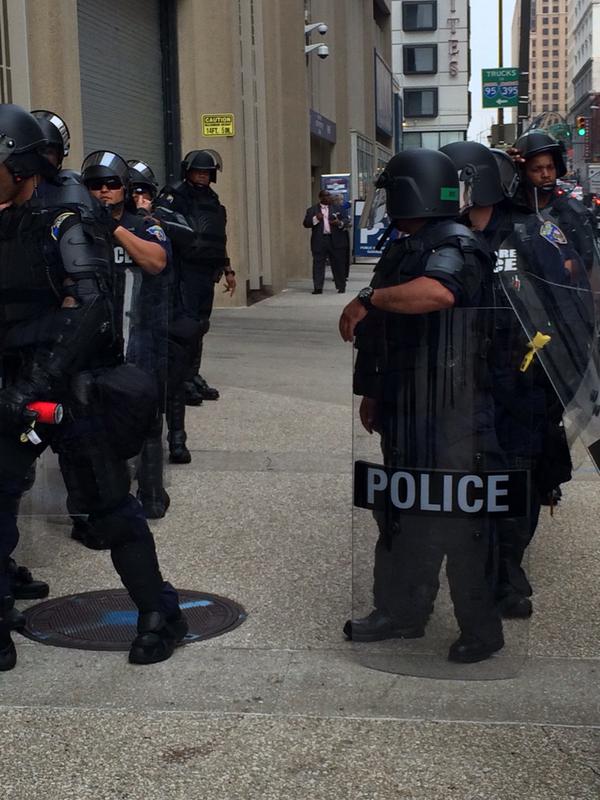