It's a cute clip and pretty effectively slams Jeb, IMO.

I'm starting to feel sorry for Jeb. He's not doing himself any favors lately!
edit on 8/25/2015 by Benevolent Heretic because: (no reason given)

Jeb is indeed having a hard time. It's almost like he didn't really want to run at all but somebody made him do it. Daddy Bush maybe...

That's something I hadn't thought of... I wonder what Barbara has to say about this...Somehow, I don't think it would be kind...

originally posted by: Kangaruex4Ewe
Finally!!! A Bush I can get behind!

Why do you want to hide behind the Bush's?

But on topic; the polls show Trump ahead, but the media still calls Jeb "The front-runner".

I'm sure I'll regret asking this... But how is this in any way a response to the OP or an attack on Trump? It's a dumb non-butter commercial. Right?

I thought it was about "messing with" Bush's mother and her possibly response... That was my interpretation, anyway.

Well, I needed to stretch this morning anyway. Feels good. 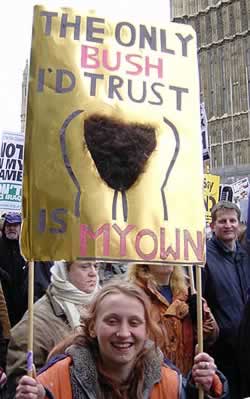 loool , seriously , isn't another Bush in office means strike three ? and you know what that means

I wonder if Biden will be the same way...I know that it was a wish of his son's before he died that his dad run for President, but prior to that I think he was going to abstain. Now it looks like he's going to be in the running.

Sometimes I think that most of the candidates are running just out of expectation from other people more than a true desire from within themselves.

posted on Aug, 25 2015 @ 10:22 AM
link
Even Jeb's mother doesn't support him for president. Last two Bush's were a disaster. Trillions in debt, and lots of blood, and all for nothing.

What I like about Donald Trump is that he is somebody both democrat and republican, and even independents can like. He's interested in lowering taxes which the everyday person likes. getting the wealthy to pay a straight tax on income which is what the democrats like because it ends loopholes. He's for protecting the border with a real physical 50 foot concrete wall which is what almost everyone would like to see. And he wants Americans of every color and creed to have jobs first, and to stop companies from sending them into Mexico and China.

Jeb needs to step aside. We're all done with plastic politicians with one black hand (see photo-shop picture) who will say and do anything for power, and who will change nothing at all.

I'm afraid all this is just setting Jeb up with underdog status. I'm not a fan of attacks on any candidates by other candidates. It's distracting and usually results in (un?)intended consequences.

originally posted by: SouthernComfort
a reply to: Benevolent Heretic

I'm afraid all this is just setting Jeb up with underdog status. I'm not a fan of attacks on any candidates by other candidates. It's distracting and usually results in (un?)intended consequences.

For the most part, Trump attacks when attacked. But since Bush drew first blood, it's necessary for Trump to thump him a few times. Bush is no Trump, and he's not even a real contender. He's the pretty face of the republican establishment elite. This is our chance to hopefully rid ourselves of the same old same old.

I think as Jeb descends in the ranks the underlings will feed on him for second place behind Trump in order to get noticed for the VP slot. Although, I hope he chooses Carly Fiorina who I like as well.

originally posted by: SouthernComfort
a reply to: Benevolent Heretic

I'm afraid all this is just setting Jeb up with underdog status.

You may be right. The more Trump attacks, the more people are going to sympathize with Bush. Although Bush is doing himself no favors.

I'm not a fan of attacks on any candidates by other candidates. It's distracting and usually results in (un?)intended consequences.

I totally agree! These two (Trump and Bush) are going at each other and neither are coming out looking good. They look like children, IMO.

I wonder if Biden will be the same way...I know that it was a wish of his son's before he died that his dad run for President, but prior to that I think he was going to abstain. Now it looks like he's going to be in the running.

Yep. He may get into it if he can get Warren to be his VP, though. He may have decided he would like to try it for four more years, without the spectacle of Obama's unpopularity shadowing the whole thing.

I think Bush's awkwardness is a definite sign that he's doing this for someone else. He has no business trying to be president... But then again, neither does Trump.

I agree that Carly would be perfect as Trump's running mate. Because women and Trump. Not to mention she really holds her own like a BOSS.

posted on Aug, 25 2015 @ 10:37 AM
link
I have lost all faith in the electoral process.
imo, Bush has already been selected by the GOP and they are not going to place Trump as the Republican candidate for PTOUS. It's a very select good ole boys club and Trump, despite his $$$ is viewed as an outsider.
What we see on the MSM is all BS that has been fed to them by the real power brokers behind the scenes in the pentagon, corporate board rooms in glass towers in NYC. The real owners of the MSM anyway. True journalism has been dead for many years.

Trump seemingly has the momentum now but will just be a lingering memory come January of next year.

Biden is a bumbling fool.

Warren is a liar.

Bush is the idiot son.

Hillary will hopefully be in prison.

Nobody is qualified to be President. Especially this list.