The "TPP" - Is Officially *Activated*

page: 1
34
<<   2  3  4 >>
log in
join
share:
mOjOm
+8 more
posted on Aug, 21 2015 @ 04:04 PM
link
Well folks, welcome to slavery and corporate control over every aspect of your worthless, meaningless, pathetic lives. Watch this video, or read the transcript about how the false flags of "Gay Marriage" and "Confederate Flags" were the perfect cover story to take your minds off of the real enemy at our gate. The TPP is official and we are now slaves of the Corporate Class in an Official and Legal format.

As always all it takes is a good dog and pony show and some astro-turfed activists to look like idiots to get peoples attention away from what is really important. Best part is that nobody get's a "get out of blame card" here either. Pushed through by a Republican Run Congress and a Democratic President both sides of the isle are responsible for the Treasonous Act of Killing our Sovereignty. Meanwhile "We the People" stood by, scratching our asses, pointing fingers at each other, blaming Gays and Gods and getting drunk and high letting it all happen because we love a good lie.

Well, we're all in it together now folks so you may want to stop hating each other and start getting used to one another real fast because we're all going to be getting real familiar with each other now. Welcome to the new slave class where everyone is your brother and sister. Everyone but the masters of course, but you'll never get a chance to know them most likely as they won't associate with you.

Face it, the perfect storm is here. The majority of people in this nation are either living off the government or actively trying to destroy it. Education is being cut and dismantled and what's left of it is nothing but propaganda and dropped to lowest standards possible. Religious Extremism is on the rise along with political extremism. Police brutality and elitism is becoming more militarized to keep the beasts beaten down and in their cages where we use them for cheap labor. The front runner for the GOP want's to build a giant wall around us now like Berlin and is working on a plan to deport 20 million people back to where they belong. That should make for a nice new Nation Wide Internal Military Force to accomplish all that which we'll have to get used to as well.

Enjoy the ride brothers and sisters. Remember, "That which doesn't kill you, can still makes your life suck more than it does now."

I also must say that Guy Fawkes mask looks pretty stupid. This isn't a Movie.

No one paid attention because they made sure that it couldn't be understood even by the people paid to sign off on it.

posted on Aug, 21 2015 @ 04:34 PM
link
I would have thought anonymous credibility was shot to pieces by the Jade Helm announcement.

Where are the millions of Americans being taken to the FEMA death camps?

originally posted by: ugmold
I don't buy the "distraction" premise. American People generally don't give a damn, most I know say "What can I do"? They just don't give a sh•t.

Well, you certainly have a point there. Most Americans don't give a damn even without a distraction. However, TPP exposure was gaining some attention there for a second and was getting some coverage too. So while American Apathy was still at an all time high it never hurts to cover your butt too.

Without something stupid and simple to complain about some Gun Loving Americans might have noticed their country being sold off to Corporate Power (slaves included) and might have thought putting a few bullets into some Bureaucrat or Pig CEO would be a good idea. So it's better to keep them occupied with something like Gay People, God's Wrath, Racist Flags or something they can understand. That way the real masters of evil can get down to adult business like enslaving all of mankind with their false economic systems and legal fictions.

Maybe it was overkill and no distraction was needed. But the people pulling these strings aren't big taking chances this close to the end game either. The only holes they like to leave around are the ones they know how to squirm their bloated, disgusting asses through before closing the door behind them.

I have an acquaintance that was for the TPP. After listening to his How great it will be. How many jobs it will open up. How he might get a hire position because of the people that they will hire.

I spoke about why I thought it was bad. Nope you're wrong it can save up from depression.

Then he said "Tpp is bad, you're right , it shouldn't happen" amazing how the mind works sometimes.

As I was reading your thread, I had to scroll back up to check if this was in the right forum.

For those who say this will create more jobs in America by increasing our exports, you have basically put all your trust into the CEO's of most Fortune 500 companies. The same people present, past and future presidents and their ilk have put their trust into, for various reasons. They will forgo the "Made in America" export deals and set up shop directly where they plan to do business while other countries gladly welcome the boost to their economies and labor force.

In case anyone is wondering who voted to fast track this thing... 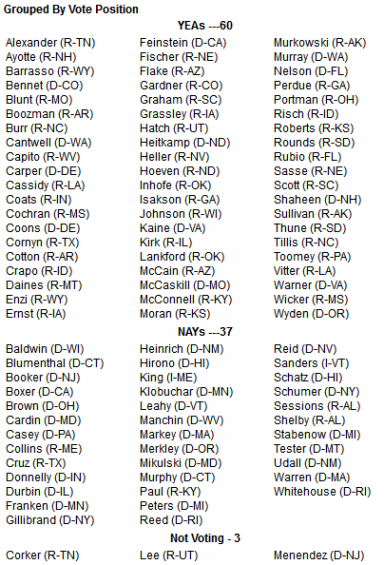 originally posted by: markosity1973
I would have thought anonymous credibility was shot to pieces by the Jade Helm announcement.

Where are the millions of Americans being taken to the FEMA death camps?

There are many different factions to Anon first of all so their ideas and comments aren't universal amongst them all. I don't know anything about what they've said on JadeHelm either so I can't comment on that.

However, in the middle of that video is another video with Robert Reich where he also breaks down what the TPP is all about. If you don't trust Anon, fine, but you may want to listen to him. He's a political economist, professor, author, and political commentator. He served in the administrations of Presidents Gerald Ford and Jimmy Carter and was Secretary of Labor under President Bill Clinton from 1993 to 1997. He knows what he's talking about.


in fact... the congress and the citizens acquiesced to having a dictator...fast track trade authority & the Iran Nuke raw-deal back-to-back.... I shudder

Basically, it is doomed to fail. The more governments and corporations flail against the very nature of information and information technology, the more the fool they appear. I say let them waste their short time and limitless resources on trying to shoot down the sun.

Information is no ones. Once you speak, your words are not your own. The second you ask us to lend you our ears, what you say becomes ours to transform and disseminate according to the random nature of life.

posted on Aug, 21 2015 @ 05:00 PM
link
We should destroy ourselves so they have nothing to control. A kamikaze is our only hope

America's Got Talent is on and I want to vote!

In fact I have a thread somewhere saying the same thing


This is clear proof the GOP are outright direct slaves of the elite corporatists and also Obama and Bill Clinton who enacted NAFTA...


It will be interesting to watch the political show, the US elections, and the new clown Trump, in relationship to this scam TPP.


Trump may be the King David of the NWO...I doubt he is a sincere candidate for the people

We here in New Zealand are hooked into this tpp as well. We also have been a bit distracted for a while now , fighting over the colour of a stupid new flag for NZ.
Guess they played the flag game here as well.

We here in New Zealand are hooked into this tpp as well. We also have been a bit distracted for a while now , fighting over the colour of a stupid new flag for NZ.
Guess they played the flag game here as well.


We are so damn predictable.

Or are we just so well conditioned and programmed?

It is interesting, and sad we allowed ourselves to fall for it, that the FLAG issue has been used elsewhere in the world to help solidify the NWO crowd into power. Dreams of a Utopian type future of any flavor kaput. Everyone on Earth is now in the hands of a dangerous group of Elites.

We need to WAKE UP! There may still be a chance to Save Ourselves. But we will have to do it ourselves, because as you can TPP see, they ain't going to help us.

Can't wait for the effects and after-shocks.