posted on Aug, 19 2015 @ 06:08 PM
link
So I was driving to the bank this morning around 8am to get 20 bucks out of the ATM machine. On my way there, which is only a mile or two from my house, I saw at least 3 or 4 different police cruisers just going different directions, to and fro, patrolling I guess.

I get to the food mart up the road from my house and stop for a couple of minutes before exiting the vehicle to write a text message. Then I go in and buy what I wanted to buy, and left. I drove down the main blvd to get to the turn for the street before my street, and a cop pulls out and starts following me. Then I correctly stop and take my right turn, and proceed down the street. I'm about to turn onto my street, I hit my blinker, and as I expected, flashing blue lights in the rearview.

So I immediately pull over, hit emergencies, and roll down windows. It's a young, short, short haired blonde female officer. She greets me, I greet her back, and she asks if this is my truck, etc. Then she tells me that she pulled me over because my stock oem tow hitch, which has been attached to the back of the ford explorer since it was made about 20 years ago, is 'blocking the view of part of my license plate'.

Wow, really, alright, I'm sorry, I have never heard of that. By then, a male cop is at the driver side window, she had approached the passenger side window. He's also excessively short, as short as her, and asks me if I have a gun?! Lol. Of course not, I say, I've never owned a gun. They ask, well, do you have anything on you? I guess that means weapons and drugs, so I said no I don't, and they're free to check. I explained why I was out and where I went when they asked. Somewhere early on there, the male asks me why I am shaking, lol!

Gee, maybe because you pulled me for no true reason, there's now THREE of you, and you all have guns. I didn't say any of that of course, lol. So I told him that I had little sleep that night and was stressed due to moving soon, and that normally I'd be asleep at this time, which was now 8:15am or so.

So they tell me to stand behind the truck, the female cop is going through stuff in the truck, while the short dude is talking to me. He asks if I knew why I was pulled, and I said it kind of loud so she could hear it and said apparently the tow hitch is blocking 1 letter of the license plate. Before all of that when they took me behind the truck I said, what, do I look like a bad person or something? and took my hat off for them.

So blah blah blah, I'm telling them i live down the street and my step father who works for the department of defense is waiting for the truck and the money he sent me to get at the ATM. Then they lightly patted me down for 'weapons' lol and then handed me my I.D. and told me that I was "free to go", lol. I said thank you maam and y'all have a good day, got into the truck, and drove home.

I'm still mad that I got profiled. I have a short beard and moustache, I had a green fidel castro looking hat on, and I'm a relatively young white male, maybe look a little younger than I am. These cops had been stalking me most likely since whenever the first one of the three noticed me going by the bank, and had the # all set up and ready. Pathetic.

posted on Aug, 19 2015 @ 06:12 PM
link
too long i didnt read it, you should rant about people who walk with their hands behind their back, or people who whistle.

Their quota must be down for the month.

It's like the speed traps they sometimes set up here where they will give you the run around if you happen to actually pull over for them. They sit a bunch of cops under an overpass and those caps do their best to look like they're trying to flag everyone down and if you make the mistake of actually pulling over for them, they will treat you like you described just hoping to find a violation.

originally posted by: Rikku
too long i didnt read it, you should rant about people who walk with their hands behind their back, or people who whistle.

ignore the depravity of mankind.

it'll bite you in the end. 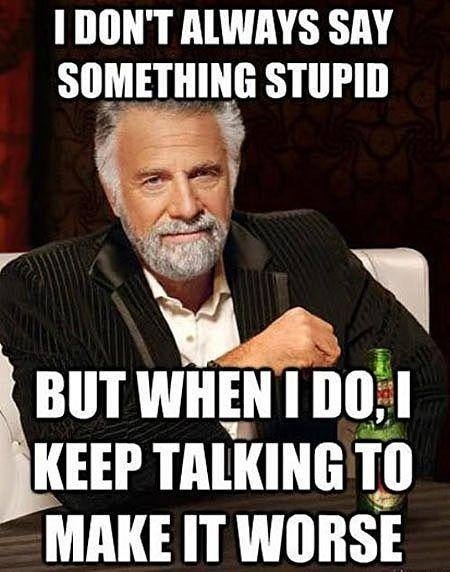 That's about as care free a stop as your gonna get these days.

You're white, was probably driving "micro-aggressively".

You cannot be profiled.

That must be hard to be profiled by the police when you're a young, white male. I wonder if anyone else experiences this regularly

Their quota must be down for the month.

It's like the speed traps they sometimes set up here where they will give you the run around if you happen to actually pull over for them. They sit a bunch of cops under an overpass and those caps do their best to look like they're trying to flag everyone down and if you make the mistake of actually pulling over for them, they will treat you like you described just hoping to find a violation.

But, it was just so terribly degrading and insulting. Sure, I might look like a druggie or a thug a little I guess, I'm tall and thin, and I wear shorts, jeans, t shirts, and button up collared shirts. I wear hats. Alot of my clothes are old and raggedy. I am under a lot of stress lately, so I lose sleep sometimes so I look a little buggy I guess.

I'm tired of society treating me like they think I'm going to be the next mass movie theatre / school shooter, or that i do drugs, just because of how I look. And I'm not even that bad looking in all respects, I have a mild sense of style to begin with, I look appropriate in my opinion in most cases.

originally posted by: cj6
a reply to: r0xor

That must be hard to be profiled by the police when you're a young, white male. I wonder if anyone else experiences this regularly

In this city, all the time.

Try being a scrubby looking white boy who they think looks like a druggie in a mostly black drug infested neighborhood. I will save the insult because this is supposed to be a civil place, however ignorance abounds.
edit on 8/19/2015 by r0xor because: (no reason given)

posted on Aug, 19 2015 @ 06:19 PM
link
That sounds like my neck of the woods. They don't actually profile you, they just clamp on the first insignificant minor thing they saw just a little out of whack with all the laws on the books as an excuse to pull you over and run their playbook to find anything else on you.

Who hasn't gone through that, lately? You survived because you cooperated and didn't start complaining. If you had so much as pulled away when they groped you, or said, do you have a warrant, you'd be lucky to just get a ticket for obstructed license plate. As is both you all went on your way without so much as a short delay to your day.

Now flame me because the OP didn't fight the police on the side of the road.

Now flame me because the OP didn't fight the police on the side of the road.

I felt relieved that I was safe from the jail and home to my family.

I felt sad and upset that it happened to begin with, discriminated for being noticeably different looking, or poor looking.

I didn't feel violated, interestingly, because what did they violate? oh you felt me up, shucks.

They let the female do it too while they watched, lol. I took that ironically as a compliment, I must look good.

Dude try being black um...anywhere. Then we'll talk about how hard it is to be white in your "black drug infested" neighborhood.

posted on Aug, 19 2015 @ 06:33 PM
link
This is a lesson to everyone! Blend in. Don't stick out. If you've been stopped by the cops, its your fault you were doing something stupid. Don't draw attention to yourself.

Its got frig all to do with them where op was going and he most certainly does NOT NEED THEIR PERMISSION!

I felt relieved that I was safe from the jail and home to my family.

Ditto. I can't tell you how many times that happened to me because I was sleeping in my truck somewhere.

Nothing to take personal, they are dong their job as they see it. You could try and tell them their job but I didn't. I just let them do it.

You did fine, the only thing I saw in your recount that was lacking was talking all about yourself. Don't tell them anything they don't ask you directly, they don't need to know any more about you than can be helped.

It must have been a slow day for them.
I've had that happen more times than I can count. I have long hair so they must think I'm a druggy or something. It even happened when I was right in front of my apartment. I was on my way to a friend's from work. Cop just turns around and follows me. He said some guy in a totally different make, model, and color car was causing trouble in an area I wasn't even in. Good excuse, huh? Don't sweat it. At least more of them didn't show up and have you do the drunk walk for entertainment while they all laughed and made threats.

Its got frig all to do with them where op was going and he most certainly does NOT NEED THEIR PERMISSION!


OP wasn't asking for permission to do anything, he was minding his own business. They were obviously playing cop, the last thing you want to do is tell them their business.

Remember, they are looking for trouble. Its their job.

Is this to be a keyboard warrior "CAPS" argument, VoidHawk?

I can say with almost certainty....as many say or know cops have a quota which is illegal...so to get around this "quota" they include any kind of contact whatsoever to include warnings and field interviews etc. So in essence she was probably looking for a bull# traffic stop so she could make a "contact" with the public without having to get them a ticket. So you sir gave up some time in exchange to save some other poor sod from getting a ticket.

The other thing that can happen is someone calls in that your truck/you is/are suspicious so they try to desperately find something to pull you over for to see who you are...even though its all bull#.

And sometimes newer officers feel more confident with small time stuff like that while they are learning how to interact more with the public.

Im sure its nothing personal but ya...annoying.