Thoth Technology and the Space Elevator 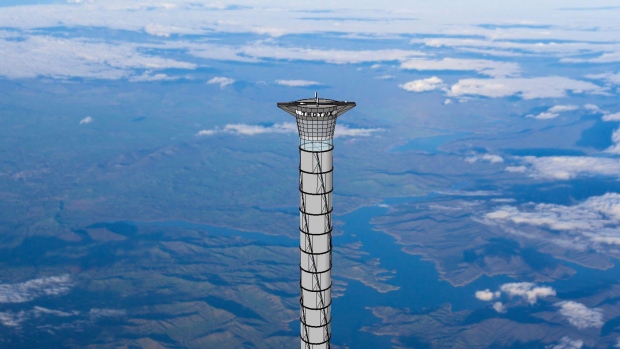 Pembroke, Ont.-based Thoth Technology has patented an inflatable tower that could carry a "space elevator" higher than passenger jets fly – and eventually into low-Earth orbit.

The patent, which has been granted in the U.K. and the U.S. so far, describes a tower with a space launch platform on top that could theoretically be built to more than 200 kilometres high, and reach into low Earth orbit.

It would be made of stacked rings of Kevlar cells inflated with hydrogen or helium to an extremely high pressure. An elevator could ride up the tower, carrying spacecraft, satellites and other goods to be launched into space – along with tourists looking for an extraordinary view.

What say you, ATS… is this the next step?

According to the article it will take 10 years to build and cost roughly $5 billion. In reality that translates into 35 years to materialise and $500 billion.

That aside, it looks like a fantastic idea, and I hope I'm around to see one fully functional.

posted on Aug, 18 2015 @ 10:26 AM
link
I would say it will be a nightmare to build and an even bigger one to ensure security. This thing would be a target for anyone looking to destroy something....and talk about bad press if it failed somehow....

posted on Aug, 18 2015 @ 10:26 AM
link
Thats amazing thank you for sharing this !
Apparently we are about out of helium however.
So I hope they can do this, as it would be SO COOL !
I think the U.S. MIC have taken all of it
for their 1/4 mile long graphene Big Black Triangles.

I think that this is a fantastic concept, but wholly impractical. For all that it will be made out of inflatable segments of Kevlar lined material, the fact that it may be filled with high pressure hydrogen, makes it a target for terrorist vandalisation, and a highly explosive target at that.

Because of its vast scale, there would be no way to defend its entire height and base from assault effectively.

posted on Aug, 18 2015 @ 10:37 AM
link
I'm concerned about high elevation winds and airline traffic. The concept is good, but the location would have to be carefully chosen.

If one considers the amount of cash involved in liquid fuel launches and the construction of bases like the Kennedy Space Centre, then perhaps it's doable over the course of a decade or two... but with major concerns.
edit on 18/8/15 by masqua because: (no reason given)

Your'e right it's definitely an old idea.
I remember hearing about this years back and thinking it was a far fetched idea that would never come into fruition.
But now it does not seem out of the bounds of probability,we could probably have machines building it and security done by autonomous drones in the next ten years.

However googling miles to space from sea level the results are 62 miles / 100 km, so would that mean this elevator is well out into space at twice the distance at 200 km? I doubt this will ever be built. It would be better to invent a different propulsion system, something with anti-gravity perhaps.

posted on Aug, 18 2015 @ 11:57 AM
link
I always thought that a space elevator with a weight at the end in orbit at the same place of the spot on earth would eventually warp around bringing the weight with it (with disastrous consequentness). Perhaps some or maybe a lot of manoeuvring thrusting could stop this if it was an issue *no idea shrug*.
edit on b57571132 by Biigs because: (no reason given)

Because of its vast scale, there would be no way to defend its entire height and base from assault effectively.

The first question which sprang to my mind was how do you get the spacecraft up there? A central, internal elevator? You sure as Hell couldn't land a re-usable ship up there.

A true space elevator would be built from geosynchronous orbit both towards the Earth, and also away into space. In this way, both 'arms' would counterbalance.

The geosynchronous nature of the structure would mean that the Earth facing arm would always be in approximately the same location.

It also doesn't have to touch the ground, but could terminate at altitude making it safer from attack and less affected by planetary precession. Conventional aircraft (like high lift helicopters) could then convey payloads to the terminus.

It is the issue of reaching escape velocity that prevents easy space access for us. This 'tower' concept puts us out of the atmosphere, but does not put us out of the Earth's gravity well. We'd still need reaction engines (rockets) to get into space (at least until we have some breakthrough that could substitute).

Wouldn't it have to be built on the Equator ( centrifugal force and all )? At some point in it's length those same forces or the lack of gravity would change the load from pushing down to the surface, to pulling, as the pieces are being sling into space. Wait 23 degrees, ummm carry the 9, yeah, what you said a carefully chosen spot. It's like stacking Lincoln Logs on a spinning globe, good luck with that.

As far as the security threat, sure it would exist, but no more than a solid rocket booster on the pad at Kennedy. They stay pretty safe.
edit on 18-8-2015 by wastedown because: grammar nazi evasion

Manufacturing platform suspended from several airships, and the parts would be drawn up the elevator for assembly on the top floor.

posted on Aug, 18 2015 @ 05:40 PM
link
It's easier than all that. Beautifully simple I'd say. Just build the tower near to the seaside ( ships / land cargo etc) which is inflated / extended / stabilised, by a gargantuan tidal push / pull type pump. Pump up the structure with air. If the moon stops orbiting the earth I'd say we're pretty screwed anyway.

posted on Aug, 18 2015 @ 06:12 PM
link
I say it be a engineering nightmare.. The wind sheer on that much surface area alone would be tremendous.. The material would have to have a ton of give but still be strong enough not to weaken from the heat created with the back and forth.. If it was created I wouldn't give it a very long life span..

Think about it.. 200 plus kilometers up with a base of what? The back and forth movement would be hundreds of feet..

I don't see this being done in our lifetimes .. I thought the space elevator attached to a low orbiting station was a better idea..

But I'm just a high school graduate , wtf do I know?

Here is the website of the company behind this: thothx.com...

Manufacturing platform suspended from several airships, and the parts would be drawn up the elevator for assembly on the top floor. 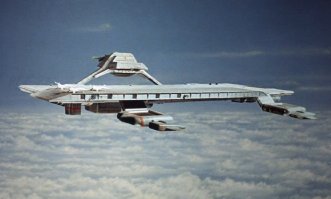