posted on Aug, 17 2015 @ 05:47 PM
link
Whether or not a person has pets, this story should be equally disturbing to all because a monster capable of this level of cruelty toward a small dog is likely capable of the same sort of heinous act against a human being. 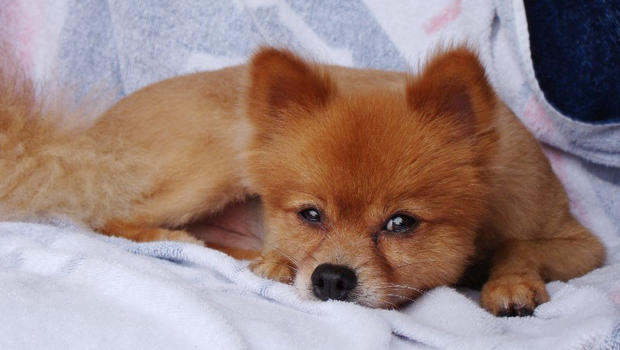 PEMBROKE PINES, Fla. -- An investigation is underway after a missing dog was found dead in Pembroke Pines with a note attached to its body which said "We beat it to death lol!"

CBS Miami reports that the owner, Ronald Boisvert, says he doesn't know why anyone would want to hurt his 13-year old Pomeranian named Fox.

The dog vanished Friday after Boisvert's girlfriend took him outside last Friday and never returned. On Saturday a "frantic" neighbor found the dog's body on the back porch of Boisvert's condo. Attached to the dog's body was a handwritten note taped to it which read "WE BEAT IT 2 Death lol! (smiley face) HAHAHA!" The dog had no visible injuries.

This poor dog's body was then taken to the Saint Francis Animal Hospital and an examination revealed ten broken ribs, missing teeth and a broken back. The vet who conducted the examination stated that the dog's injuries were likely a result of being kicked. The note made me think of Albert Fish's letter to the family of Grace Budd and the sadistic pleasure he took not only in murdering a defenseless child but also in torturing her family after the fact.

I hope they find the person or persons responsible and remove them from society permanently. There are acts of depravity so egregious that in my opinion, there can be no rehabilitation.

Not sure what came of it, but I'm guessing that no one has been caught yet.


The enormity of these people is why I'm pro eugenics & death penalty.
edit on 17-8-2015 by CharlieSpeirs because: (no reason given)

Ah, thanks for the heads up! I was so taken aback with the story that I didn't noticed it was from last week.

it was closed by staff

I'm not surprised fella, it's heartbreaking.

And as Juggalo said that thread was closed, from what I remember it was far off topic nonsense filtering the discourse.

posted on Aug, 17 2015 @ 06:13 PM
link
Disgusting.How messed up people must be to do this to any animal never ceases to amaze me.
Hopefully the perp gets his/her comeuppance.

It is a sickening story. If someone can do that to a dog, they can do it to a human.

The other thread on this was taken down because of a lot of bickering and off-topic posts. Put your seat belt on.

That is just bloody horrible.

I know not what else to say, that would not have occurred to others already. Horrible.

I'm not normally a violent person, but I think an "eye for an eye" is an adequate response for this kind of brutality and disregard for life.

ATS T&C prevents me from saying what I think should happen to the (extremly dirty words) who did this.

posted on Aug, 17 2015 @ 07:34 PM
link
It's their loss. They'll never understand how deep and rewarding the connection between animals and humans can be and how much they can enrich our lives. Most of the best friends I ever had were animals.

All I have to say on the subject.

posted on Aug, 17 2015 @ 08:13 PM
link
Doesn't look like any update to this story but if there is, it'll likely appear on the Facebook profile that the the dog's owners — a couple with a 4 year-old child — have created, Justice for Fox. Here's an image of an earlier flyer from the Facebook profile which shows the handwritten note. The reward is now up to $8,000. 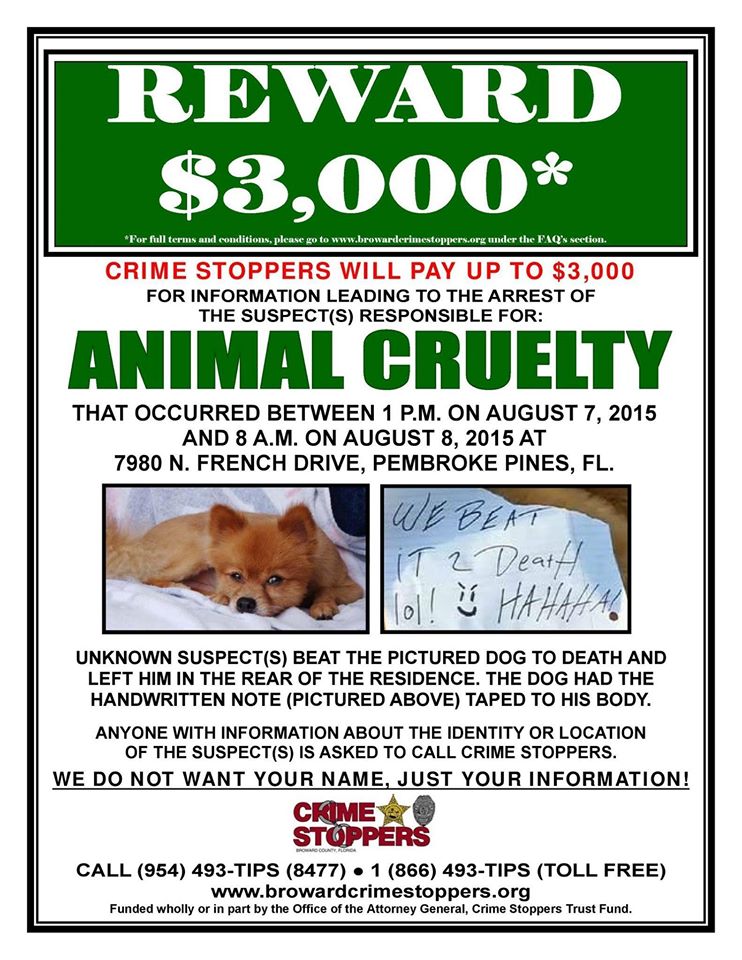 Hopefully somebody recognizes the handwriting, it's got some interesting characteristics.
edit on 2015-8-17 by theantediluvian because: (no reason given)

Very disturbing and sad. We can probably bet it was a couple of teenagers. Anyone who would do such a thing doesn't have a conscience or any sense of morality. This is a trait of future serial killers. I hope they find who did this and give them a punishment they'll never forget. Once these individuals are caught, the police better keep tabs on them because the next victim could very well be a human life.

it was closed by staff

This was discussed earlier and closed by staff.
A duplicate is not needed.