Bulls kill seven at Spain summer festivals , four of them over the weekend

posted on Aug, 17 2015 @ 05:58 AM
link
Sympathies go out to the families of those killed.
Th deaths have been caused by the frankly stupid activity known as bull-running where bulls are let lose in crowded streets and runners have to try not to get killed by the terrified animals , most make it out alive with just bumps and scrapes and some don't , this year more than usual didn't.


The deaths occurred during bull-running in the streets, not in bullrings. It is an unusually high number of fatalities for such a short period.
Among them was a 36-year-old town councillor gored in Penafiel, a town near Valladolid, north of Madrid.
Further north an 18-year-old man gored in the stomach died in Lerin, Navarra.
The other deaths occurred during bull festivals in the regions of Valencia, Murcia, Toledo, Castellon and Alicante.
Last year more than 7,200 bulls and steers (castrated bull calves) were killed by bullfighters across Spain, the news website El Diario reports.
www.bbc.co.uk...

As I said above commiserations to the families but those involved took the risk and died supporting this barbaric pastime , it's the 21st century people ! , if you want excitement jump off a bridge and shout Bunjiiiii !

Spain is slowly moving away from Bull fighting so surely this activity needs to be consigned to the dustbin of history along with that , my thoughts are with the Bulls not their tormentors.

posted on Aug, 17 2015 @ 06:30 AM
link
Indeed it is certainly sad when anyone passes before their time and the void left for families and friends is huge.
That said this Darwin Award level stupidity and if you play with fire, you might get burned.
OK so it's not bullfighting (when bullfighters get gored it is nature getting revenge and I have no sympathy) but these bulls are wound up, excited and set free to cause mayhem and that's exactly what they did.
edit on 17-8-2015 by stargatetravels because: (no reason given)

Seriously, barbaric practices like these, I say go get em bulls!

They are helping us to clean the gene pool.

posted on Aug, 17 2015 @ 06:43 AM
link
you'd think after the third or fourth time they do this someone would be like
"Animals the size of a car, with long sharp horns being forced to run down a small town street sounds potentially dangerous"

My sympathy goes to the bulls.

The morons who partake in activities which involve releasing a bull into an unfamiliar and uncomfortable environment, with hordes of baying onlookers and people running about all over the place, I have absolutely no sympathy for. Seven people get a Darwin Award, and several bulls get traumatised and have to live with that the rest of their days. The bulls do not have a choice, the people do, and that is the clincher for me.

I don't think runners "have to" do anything, do they? The video I've seen of the bulls there's a lot of people NOT running in front of the bulls so I feel like that's an optional activity, not a required one.


The beef removed a few burger eaters. I think the bulls should love the opportunity. I never plan on participating because they probably have a deep hatred of my stomach.

originally posted by: gortex
Sympathies go out to the families of those killed.
Th deaths have been caused by the frankly stupid activity known as bull-running where bulls are let lose in crowded streets and runners have to try not to get killed by the terrified animals .

to these deaths i say
"hahahahahah...oh yeah" 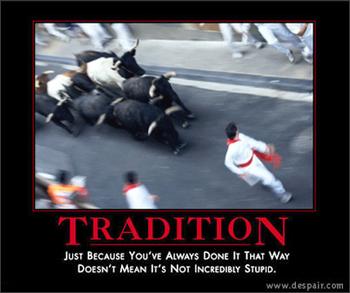 One can hope this silly "tradition", will end soon!

Darwin awards all round.

posted on Aug, 17 2015 @ 08:23 AM
link
In the village where i live, and in the surrounding ones as well, they have what's called "Toro embolado" . What they do is attach a steel frame with two burning balls of wax to it's horns and let it loose in the streets. So not only do people get gored, they also get third degree burns. Don't like it at all, but apparently it's a tradition from the Romans who'd charge a heap of them through a village to set it on fire before they attacked...

Depends on the video you watch and the location it was shot I guess.
Here's a video of silly people getting what they deserve.
Interesting to note how the bulls in this video are on a leash.


Nothing funnier than seeing silly people flying through the air.

Great video of a bunch of people voluntarily pissing off animals and then getting their asses handed to them.

Again, I didn't see anybody making any of those people do what they did. Amazing how the people who aren't antagonizing the animals get left alone, innit?

posted on Aug, 17 2015 @ 08:59 AM
link
Totally on the side of the bulls. If only there were some way to let them know that we are not all barbarians and that we do not all agree with these horrible practices.

Here is a clip from the wonderful Book of Life that can bring a tear to the eye:

That BBC article is BS - it shows a 'Recortador' in the second picture - these guys aren't bullfighters or street bull-runners. They don't treat their bulls like crap either, they treat them as racehorses, probably better.

They are stock pictures used to illustrate the story , the story itself is about deaths caused by bulls in Spain this season during bull runs not bull fights.

Ya I guess sympathies to the families, unless them too enjoy this retarded sport?art? retardism and brutality if u ask me.... honestly I hope the bulls kill more and more of these jackass's, me being 1/2 spaniard I think this has to stop!