And the protests are starting in China!

People in the Chinese city of Tianjin whose homes were damaged by the huge explosions at on 12 August have staged protests to demand compensation from the government.
Scores gathered outside the Mayfair Hotel, where officials have been giving news conferences.
Residents say the chemical storage warehouses which blew up had been built illegally close to their homes.
The blasts focused on a warehouse which was storing sodium cyanide.

Remember, this is China. Protests are a big no-no there. But this blast was such a big deal that the government has no option but to allow them to show their frustration.

The people claim that the warehouse was illegally built near their houses. Plus they want compensation and answers.

Recently the Chinese economy has been sliding downwards, people have been loosing jobs. I feel the situation in China is reaching boilng point. I maybe wrong though.

And dont forget about the people who want answers regarding the chemical hazard they now face. This is quite an interesting time.

There have been some pretty good sized protests in their western provinces. Media reports are far and few in between of course.

However this is an interesting development.

nonjudgementalist
+8 more
posted on Aug, 17 2015 @ 05:11 AM
link
You would find it difficult to name a country in today's world that doesnt have a sizeable part of its population that feels increasingly discontent.

originally posted by: nonjudgementalist
You would find it difficult to name a country in today's world that doesnt have a sizeable part of its population that feels increasingly discontent.

Yes, but most of these countries can wait for the next general elections. The Chinese population on the other hand does not have this option. The only reason the people in China did not do another Tianmen, is because of the high economic growth. Now that is over, the government has to fake numbers to show a 7% growth, when in reality its around 3%. The CCP is fealing the heat. Now we have a huge disaster there, threat of chemical hazards, fear of the people that they do not know the truth about what they are breathing in.
edit on 17/8/15 by asen_y2k because: (no reason given)

originally posted by: 727Sky
a reply to: asen_y2k


I hadn't seen it until your post intrigued me to look it up and all I can say is holy #, look at that blast radius. 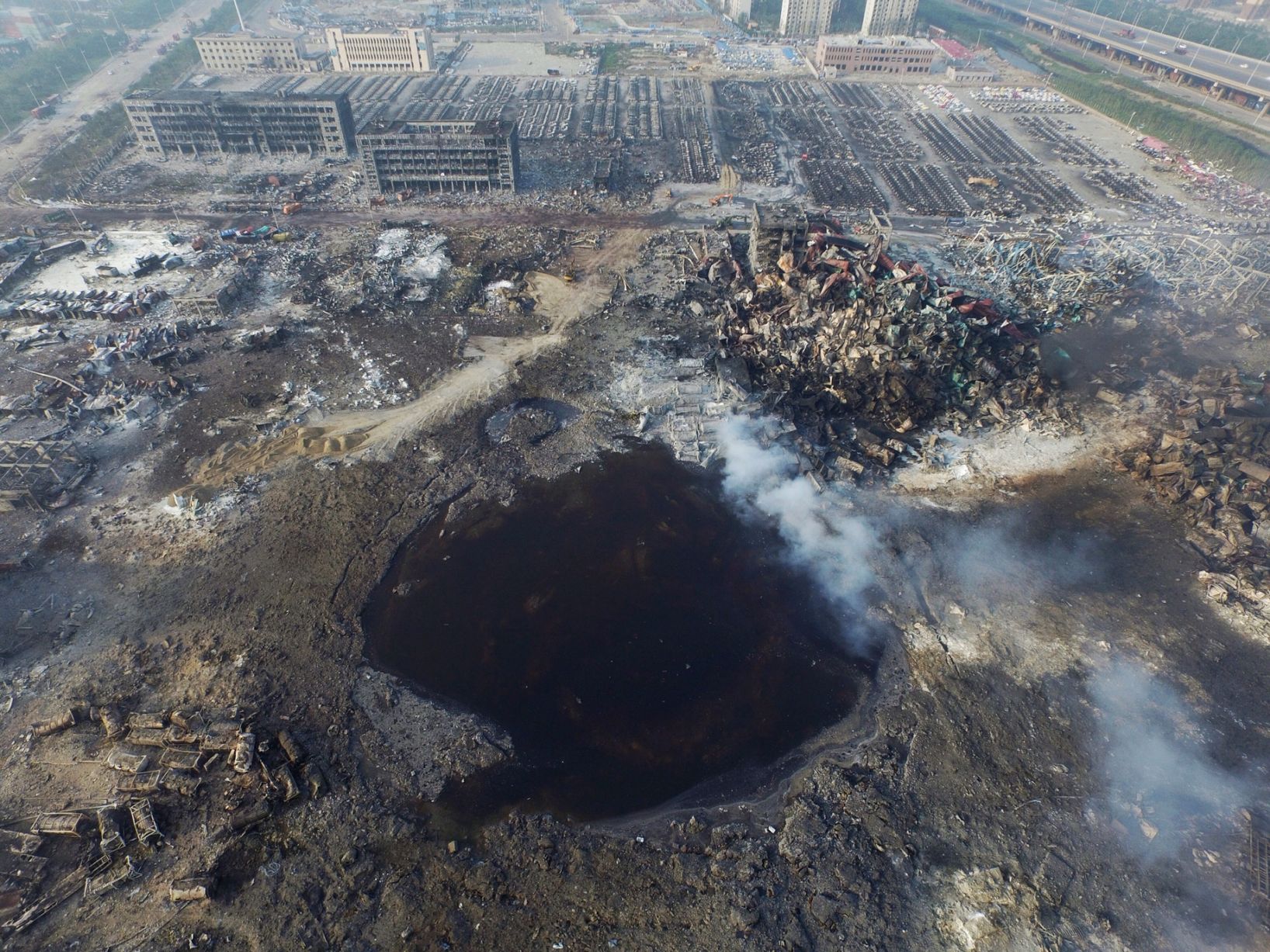 The explosion was so massive it was seen from space. Several Asian countries picked up the explosion on their weather satellites.

The video is in the link. Here is a still shot showing the explosion (in orange).

Thanks, I had seen the explosions already, they were massive. That was my first time seeing the daylight aftermath. If you take notice of the cars that weren't charred in the upper right corner you can see a distinct blast radius. Insane such a plant would be in a populated area like that.

Its good to see the prosecutor has opened an investigation. If I had to guess I am thinking chemicals were being stored improperly and in the wrong locations (close to inhabited areas). The fact water from the fire department made it worse tells me either China does not have a comprehensive program for chemical identification for incidents and hazmat / fire response or the chemicals that reacted with the water were not suppose to be present.

Either or its a massive mess and we still don't know the full extent of environmental damage, let alone after effects on the people it initially affected as well as those exposed after the fact from wind / water.


As for the video there is some decent footage from a Japanese weather satellite that has better resolution. It shows the actual shockwave expanding out from the site (it looked like it travelled pretty far). Ill dig around and see if I can find it.


ETA - Satellite footage at the 102 mark.
** WARNING - The video shows CCTV footage of the explosion from several locations. In one segment a person is looking out the front doors of a business when the explosion occurred. It blew the doors inwards, hitting the person. While it does not show the gore / aftermath, the image might be unsettling to some. That segment starts around the 33 second mark and last a few seconds **


Apparently there were 2 explosions, both registering in the 2.5+/- earthquake magnitude scale.
edit on 17-8-2015 by Xcathdra because: (no reason given)

The first camera capture of that video is powerful. You can see the blastwave coming for a fraction of a second. My condolences to all affected.

posted on Aug, 17 2015 @ 09:59 AM
link
Simple solution for the Chinese, just go to war and direct the attention of the population away from the economic pain and towards national pride
I can see it brewing

There are literally hundreds of protests of one kind or another every year in China.

Usually, these happen when local governments get out of line, or when Companies mistreat workers or close unexpectedly. What is pretty much unheard of is a demonstration/protest against the Central Government.

In this case, people will be protesting against Company officials (many of whom will end up going to jail), and the City Government (some of whom will be demoted or drummed out). The Central Government, as always, will position themselves as the peoples' champions (and they control the media) and will "come riding to the rescue".

If the Real Estate bubble ever seriously bursts, or if there is a serious economic downturn (where, say, multi-millions lose their jobs) then that will be a whole other kettle of fish...

With what happened in India yesterday do you suppose this is going to become global? These explosions and such? This seems like the trigger has been pulled to me and the bullets will continue to fly.

Been gardening fast, so can you tell me if we know the "official story" on this yet or not?

I wouldn't try to compare those two at all, one was a terrorist act and one was a human safety violation by having a manufacturing plant close enough to a residential area to create such distress and destruction.

Both are criminal and reprehensible offenses. You think someone didn't know or wasn't paid to overlook the fact they were storing that stuff too close to the general population. The only difference is the most likely cause of this event was not an intentional act, on the other hand it was negligent and criminal.

I agree 100%, but China doesn't exactly have the best regulations concerning such things, hence why they are the world's manufacturer of cheap crap. Low standards, low regulations, little regard concerning public welfare.

What will be telling is if they (the government) actually has to pay anything for the damages. My guess, if it's anything it will not be an amount to remotely compensate the damages inflicted.