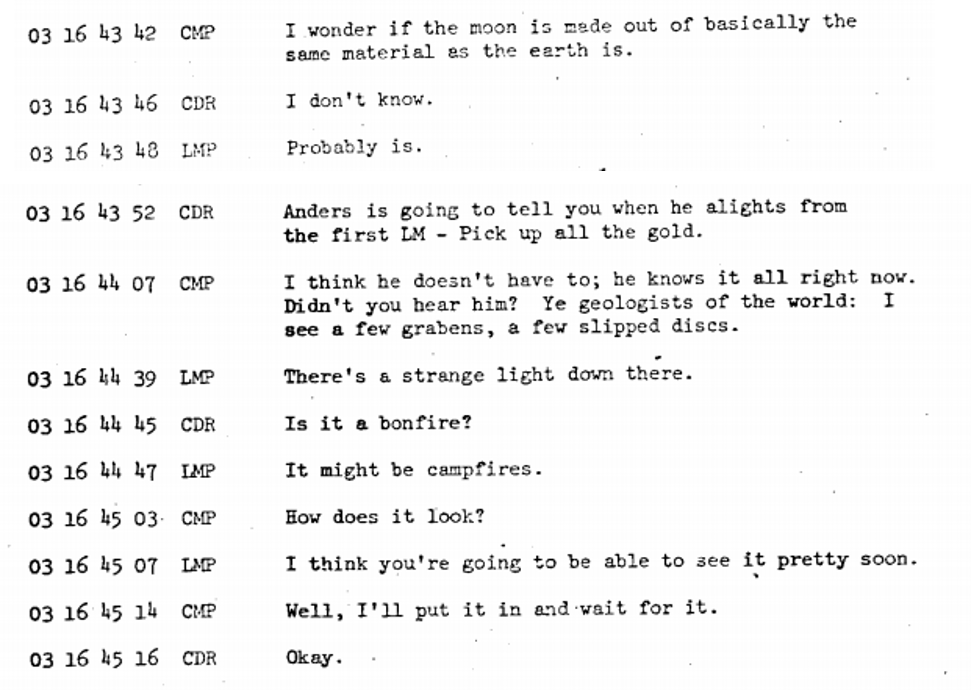 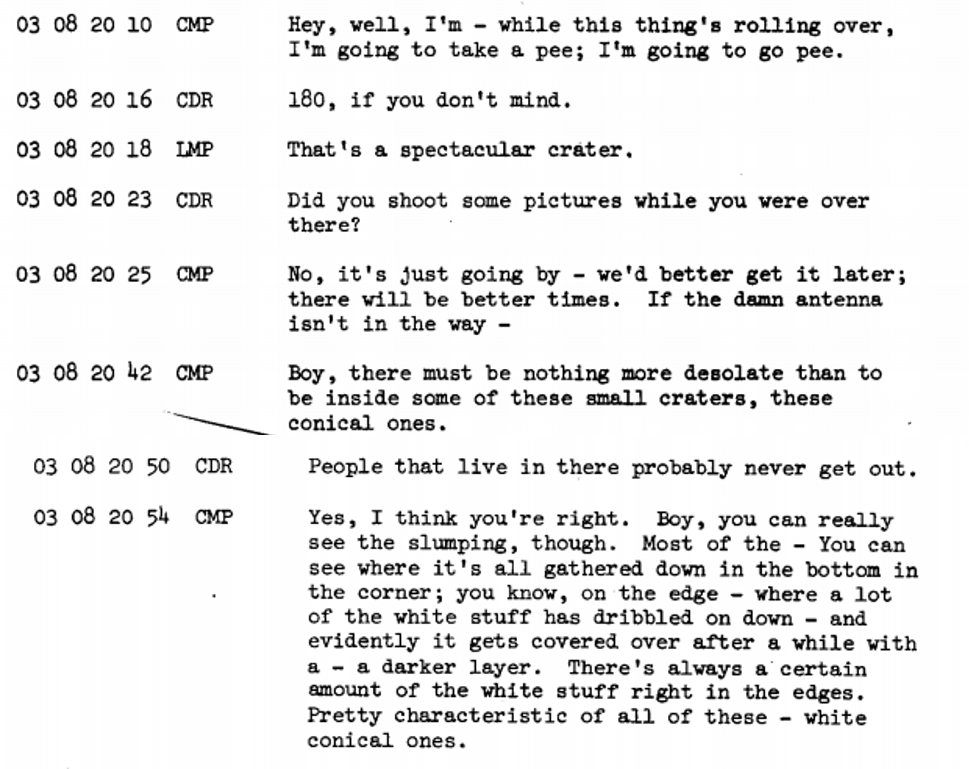 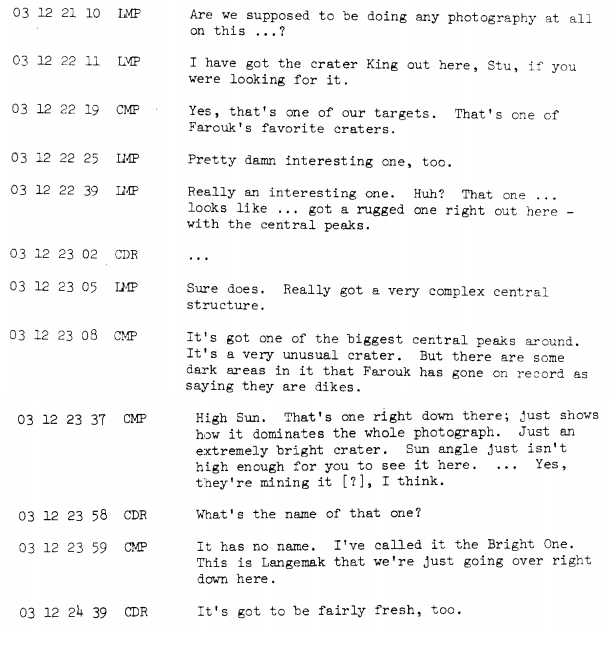 Astronauts are such trolls, but at least they take a pee like the rest of us too , give a read to all transcripts if you are bored to see what strangeness you can find

posted on Aug, 16 2015 @ 10:19 AM
link
at first i thought OP was serious
i was expecting another iteration of that Saucers Lined Up On The Crater Wall thing...
so overjoyed to be wrong!
and it's always so refreshing to see the people involved in such serious work, pushing the limits of our knowledge and experience, can keep their sense of humour

wait for it though, someone will have a reason why this should be taken as straight-faced proof of something

posted on Aug, 16 2015 @ 08:04 PM
link
a reply to: Indigent
Are these actual conversations between astronauts and the control room?
Or practical jokes from the astronauts?

Astronauts shooting the # with each other. Read the transcripts, not just the parts posted.

I read these manuscripts many moons ago. I could never get my head round the mining bit.

posted on Aug, 16 2015 @ 10:49 PM
link
Good stuff, if it proves authentic. It would support contemporary Moon landing suspicions. Mountains of gold, silicon based, domed, enclosures over crater habitats, and an atmosphere.

Campfires need oxygen. Unless, the campfires were present in the domed biospheres. The peeing bit, speaks volumes too, unless it took place on the module. The injection of modesty tells me he wasn't relieving himself in his whites.

I just hope this is the beginning of ramping up "accidental" leaks. America needs a Snowden level deep throat, via NASA.


I just hope this is the beginning of ramping up "accidental" leaks.


You know the transcripts have been available, online, for about a decade or so, right? They were not leaked.
www.jsc.nasa.gov...

Nope. I have not.

I became disenfranchised over NASA's transparency many eons ago, resulting in very little attention to their words. Their image archives proved to be more satisfying, and reliable with a little finesse. In any event, it's good to see a few scraps rationed to the public. Our friends in the program, have been know for some cunning and guile in the past. I know from first hand experience, they subtly add previously witheld data/images to mission packets, in hopes that they slip past civilian audit on debt, for continuity of credibility. Although, when the fire is held to their feet on such convictions, in token fashion, they just whistle Dixie.

Thanks for bringing that to light.

03 12 23 37 CMP "High Sun. That's one right down there; just shows how it dominates the whole photograph. Just an extremely bright crater. Sun angle just isn't high enough for you to see it here. ... Yes, they're mining it [?], I think.

You notice that [?]. That means the transcriber was not sure about what he heard. You'll see it throughout the various transcripts:

Houston, it looks like that I'm looking right up
the angular rille by - in the Crater Hipparchus.
This - this country down here is really rugged
at this altitude. The rille looks like to me a
drop had been dropped down 10,O00 feet. It was
Just another map [?].

Why would they be talking stupid nonsense and not report on what they see ?

Is this standard protocol while EVA ?

Interesting , hahah could it also mean that the transcriber was questioning what he was hearing like WTF ?
Im just joking ,

But there is another transcript from Apollo 14 I read today where they talk about a crater they flew over and it they said they saw a flat area like a table like a quarry.

I will find the time stamp tomorrow

You should read the Apollo 14 transcript , its actually quite funny , three guys in a can , only ever having flown a simulation and they are being asked to record data and make assessments and do all this whilst going into space and seeing some incredible sights through their tiny windows.

They joke about these patches which they let float around and how they will be collecting them all day/ mission
later one of the crew comments he is giving them to all the hookers in titusville when he returns .

They joke about the meals it's really quite entertaining.

Although I did notice one thing , and thats them mention about being able to see stars when they transit the moon, I will post this tomorrow I took a screen grab at work


i don't get this transcript. If they are shooting # as Phage says...it's not even remotely funny. Not a single humorous sentence.

Humor, apparently, is in the eye of the beholder.

Why would they be talking stupid nonsense and not report on what they see ?

Houston could hear everything they were saying, at least when they were on the frontside of the Moon. While on the backside...well they did report the things that were really interesting when they swung back around. The things that they made offhand comments about, no reason to. And if you read the entire transcript you'll see that the astronauts themselves weren't very concerned about them either, aside from throwing a few light comments at each other.

Is this standard protocol while EVA ?

Of the quotes in the OP, only the Apollo 11 one occurred during an EVA. But what do you mean "standard protocol." These guys were fighter jocks. Did you read "The Right Stuff" by any chance? When there is business to be done they take care of it. When there isn't, they loved to "ad lib."

You can get the audio for Apollo 11 here:
www.nasa.gov...
Follow along with the transcript. 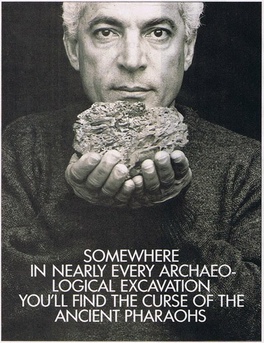