posted on Aug, 15 2015 @ 02:34 PM
link
When reading old books about religion or sifting through material on geometry, music, Pythagoras, if we look at the clock or pick up a map, we will pretty quickly notice the system we use and have been using for the past 6000 years— of breaking down reality into units and number. «Divide and conquer» is the epitaph of the age of empires. And divide they did. Those who conquered I mean. And they divided everything into units of six. 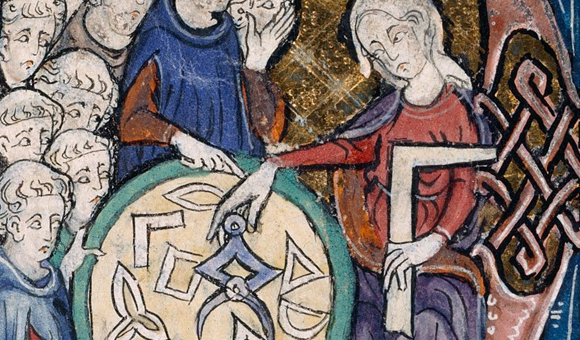 The base10 system we use today has a series of flaws. For instance 10 (ten) is only dividable with 2 and 5 while in the base12 system 10 (twelve) is dividable with 2, 3, 4, 6, and further 8, 9 and ten produce only one decimal. The clock you might have on your wall or your wrist, is actually an icon of Babylonian world domination. A 360° circle divided into 12 hours (30° each) and 60 minutes (6° each). The mechanical clock is a robotic geometrical base60 computer that tells time and geographic North quite accurately as well as many other things, and since it uses units of six, it can tell the exact time in simple units and express it rationally in just about any number base system around. If anything, 6 is the Number of the Universe. Heaven and Earth. Geometry and Time. Man and Divinity.

Human anatomy and our solar system both show that we are not here by coincidence. Some pretty powerful people, I may occasionally refer to them as the gods or the creators— out there, have levelled our solar system into a practical joke, and the proportions involved with human anatomy put us right into the middle of the picture. We are here by will and purpose. Our bodies' proportions and the numbers involved with our neighbouring planets and the orbit of the Moon and the apparent movement of the Sun across the sky? Please...

Ex.: The Earth calendar (simple Utnapisjtim version): 12 months of 30 days, 360 days a year. Add month every sixth year and two months every 120 years give or take a few hours. Now, that my friends, is a divine joke.

The proportions involved with human anatomy form the punchline in our gods' joke. The width of man's hand equals the distance between his eyes and the height of his forehead, 1/4th of the head's height. On arm's length his hand covers 10° or 1/36th of the horizon. The forearm (cubit) equals 6 hands in length, and when we stretch out our arms to the side, the distance between your fingertips equals the person's height which is roughly 185cm, compare with Leonardo's the Vitruvian Man which places man inside a circle squared according to the golden proportion. Now man's height is 1/100th of a stadium. 1 stadium = 185m, thus 1° of Earth's circumference is 600 stades, Earth's perimeter is roughly 40 000 km, thus putting man neatly smack in the middle like the divine expression of life and the universe he indeed is, his body directly reflecting the proportions of Earth, Time and and Space itself, in a simple equation packed with expectation and purpose.

Are you sure 666 is the Number of the Beast?

The more I notice the more it seems names like Jesus, Christ, Yahweh/YHWH and GOD are cryptic words which relate to the design of our planet and it's orbit. It also seems like whatever created this place also has the ability to design and create people and created a male and female to go along with those patterns.

I think humanity was supposed to realise all this long ago then find the people before they were wasted and ruined...

originally posted by: Utnapisjtim
...The width of man's hand equals the distance between his eyes and the height of his forehead...

That should be width of a person's forehead, and it's not 1/4th of the head's height.

Width of the hand corresponds to the width of the forehead and 1/6th of the forearm's length. On arm's length a palm covers 10°. Thus there are 36 such palms 'round the horizon, and adding together the numbers between 1 and 36 you get 666. It's not really something we can escape. 666 is ideal human biometry added politics and a nazi herder's eye and fasces. Racial hygiene. You know, apartheid, slavery, «the white man's burden», ending in social darwinism, Holocaust. Shambles.
edit on 16-8-2015 by Utnapisjtim because: (no reason given)