Managed to get some video : UFO - Amber Lights

posted on Aug, 13 2015 @ 09:12 PM
link
This evening, while visiting my parents. My mother pointed out how many dragon flies were buzzing around. I looked up and directly above us was a VERY bright object hovering over the house. It looked like it was hovering and occasionally would dart around before stopping again.. then slowly drifted out to the horizon.

The entire event lasted about 7min. The video below is me *trying* to view the object while holding my phone up to one of the lens. I tried my best. My phone has a 13MP camera and I was recording at 1080P @ 60fps. ( I tried to stabilize it, not sure it helped much ?? )

When we first saw the object it was much closer. However just aiming my phone up at the sky didn't yield much of anything. When we first started viewing through the binoculars, it appeared to be a dark doughnut shaped object, on its side hovering with amber lights pulsating up and round its outer circumference. Occasionally, it would appear to fade and a smaller red light would be noticeable before flaring back up and pulsing amber again. Unfortunately, by the time I thought to point my phone through the binoculars, it was twice as far away. Hopefully, something can still be salvaged from the video. 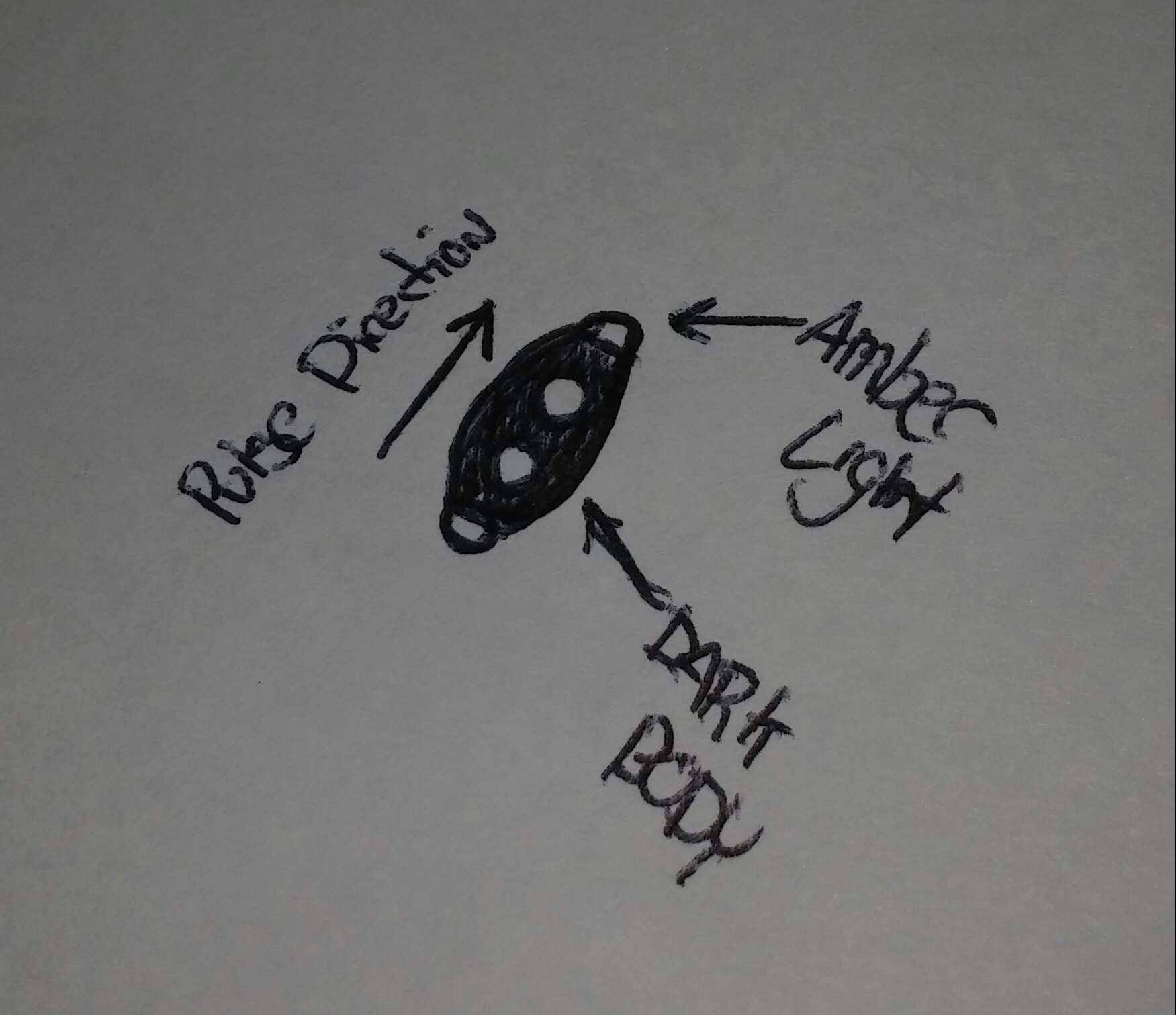 * Its shape did not seem like that of a conventional "public" known drone (not to say it wasn't).
* It was definitely NOT a balloon, only because the ring of amber lights was well defined and the occasional red "static" light was visible.
* Finally, even tho it appeared to be "hovering" in one spot. It would occasionally "flutter" almost like a TV station flickering in and out.

It says the video is private

Should be public now.. the stabilized isn't all that stable. My apologies.

I was crossing my fingers it was going to shoot off in some blaze of glory and Id finally have definitive proof on video.. but it more so just faded away..

posted on Aug, 13 2015 @ 09:57 PM
link
Nice catch. But why didn't you use the zoom option? Missed a chance at getting a good close up in daylight. No worries though, I did the same on the 4th of July. All I could do was stare at the 3 orange orbs flying above my head, even though I had my phone in my pocket I just couldn't bring my self to pull it out for some reason, I literally froze.
edit on 13-8-2015 by RealTruthSeeker because: (no reason given)

Nah, it didn't fade away...
I have no idea what it is. I am NOT an expert in anything UFOey...or anything else for that matter!

I think for seeing something, grabbing something to video it with, and all that, it is a fine video...

No need for apologies, a lot of us want answers...

I love how quickly u and lots others can dismiss things from a quick shaky video, "cant really see sh#!t but ya thats an aircraft!" lol.... unless u consider a UFO an aircraft as well its hard to tell....

OP people needs more details than that, did it move at impossible speeds or you just couldnt tell, im a amateur pilot but have a good understanding of aeronautics so if u have any what so ever can u definitively say it wasent an ordinary plane? It looks very bright but again hard to tell, can u describe the details of the angle and speed it was moving? Otherwise people wont care or other like this guy will quickly dismiss it...

Eyes to the skies nonetheless!

I can't tell heads or tails of what the hell I am looking at to be honest.

I see a dot thru a kaleidoscope..

Obviously I do not have a clear enough view of this to distinguish what the hell I am seeing besides a roof...

I'm not saying what it is, because I do not know. Simpily sharing an experance and supplying what I can.

It did not zoom around.. It was an Amber light that took 7 min to go from above us to near the roof line where I captured video. A couple times it did seem to fade and disappear before flaring up Amber again.

I know it's not much, but I didn't plan on recording something strange in the sky lol. I did the best I could with what I had on me.

During the 7min it slowly moved over the house. Several identifiable jets passed over, but didn't seem bothered by this object.

It is what it is. I wouldn't lose sleep over trying to identify it. I understand it doesn't seem like much.

originally posted by: 3danimator2014
Another AMAZING ufo video. Well, this is all the proof we need!
/sarcasm

posted on Aug, 14 2015 @ 07:11 AM
link
I actually viewed the original recording of the object ( zoomed out, just phone at the sky ) and you can actually see it blinking and fading out completely. Then coming back in a different spot. I'm currently uploading it and will post it here shortly.

** This is NOT the holy grail. But to see what looks like a star in the middle of the day hovering in the sky and blinking around (to me is not normal)


originally posted by: 3danimator2014
Another AMAZING ufo video. Well, this is all the proof we need!
/sarcasm

So i can make fun of the silly videos of course

Thanks for posting this. The 'pics or it didn't happen' crowd are typically absent. There's not enough in the videos to say what it was or whether it's some happy hoax.

For your own satisfaction, have you checked if any flights were in the area at the time?

I know people are keen on drones these days and it's hard to rule them out completely. In my own experience, they're loud and 'drone' at a pitch that's hard to ignore. The motor can be confusing to locate as I once thought I was hearing a quad bike in the distance when it was actually a drone some couple of hundred yards away in the air. If your object was silent, it lowers the chances of a drone explanation. Then again, you might live near busy traffic and wouldn't hear it anyway.

You're out of line there. The guy has done what claimants are always being asked to do: pull out the camera and use it. He's done the right thing and it's still not enough? His *proof* is that he saw something and is asking what it could have been.

The OP isn't mentioning aliens or demons, he's describing an incident with his family and backing it up with a video. I've uploaded videos on YT and it takes a little time and effort.

I appreciate the reply.

We live in a very rural part of the state. A single road with miles of woods on either side. You cannot hear any traffic other than whats going past your house.

There was "no" sound. While viewing it, we did see ONE large passenger jet fly by. Either under or over the object in question. The passenger jet didn't seem bothered by it...

It passed over my parents house at exactly 5:50pm EST. (time stamp from video)
This was over Eastern Connecticut.

The normal route planes pass over are north and south. This object was heading more East / North-East.

There was "no" sound. While viewing it, we did see ONE large passenger jet fly by. Either under or over the object in question. The passenger jet didn't seem bothered by it...

That tends to rule out helicopters and drones just off the sound they make. Drones can fly to some 1200 feet (legally) which would surely make one audible.

When you said, 'directly overhead,' did you mean that literally? As in straight above?

It's a pity there's so little detail. No visible nav lights and not enough footage to judge the distance covered by the object. Where's Bradley Int from there?


originally posted by: 3danimator2014
Another AMAZING ufo video. Well, this is all the proof we need!
/sarcasm

So i can make fun of the silly videos of course

What an interesting life

When I get home later, Ill upload the previous footage. It was "almost" directly over head. It was much higher in the sky when first observed. (but much more detail was visible through the binoculars "see sketch above") In the video, you will see it literally fading out to clear blue sky, then re-appearing and pulsing.

Bradley is North of Hartford. So North / North West. (The route we normally see air traffic fly) This object if it continued on its observed path, would go out over Cape-Cod and over the Atlantic.