posted on Aug, 13 2015 @ 10:11 AM
link
Today there are many pending wars in the world but none of them seems to be a threat of a new World war or do they?Wars on the Middle East,violent demonstrations in Greece and China,terrorist attacks in Pakistan and India,the crisis between Russia and Georgia,Iran and South Koreas` development of nuclear weaponry,are they a true warning,will they have an even more horrific outcome than they already do?Is this new,great war going to be a nuclear one and will it lead to Earths` destruction?Has the human state of mind improved have we buried ghosts of the past and learned from out mistakes, or is the only resolution to the situation today a new war after which our world won`t exist?

There are too many pacts against such a war.
That's one good thing about Globalisation

I believe it will happen, very soon.

What do you think, pro and cons?

posted on Aug, 13 2015 @ 10:19 AM
link
I don't think we'll ever see another large scale war fought like the first 2 world wars. Cyber and economic fronts are were wars will(and are) being waged. Even with small scale conflicts there seems to be no hard lines drawn in the sand with regards to sides.

posted on Aug, 13 2015 @ 10:41 AM
link
a reply to: yulka
I often worry that a massive nuclear exchange leading to the final war could begin by accident-it has nearly happened before,and could happen without any human beginning the war.

Something as simple as a computer glitch or false radar signature could lead to an automated system launching nukes,and before you know it,we're all firing them at each other.

The soviets had an automated system in the 80's,which nearly led to nukes being fired at the USA-I seem to remember an earthquake or meteor strike made the system believe the Soviet Union was under attack.
I don't remember the details fully,but I bet there are similar automated systems in the world today.

posted on Aug, 13 2015 @ 11:09 AM
link
The only nations that'd even consider trying to start WWIII are nations that would likely come out ahead; mostly nations aligned with the U.S. and NATO, maybe China. Most say Russia but I am personally thinking they're great bluffers and know they'd be at a disadvantage and take the worst of the damage. Iran? Crazy but not stupid. Israel however, now I could see them "starting" it by hitting Iran, but even that wouldn't be WWIII.

India and Pakistan aren't going to start it. China could start a regional war, which if escalated to nukes and hitting civilian areas, could turn into a minor world war.

See that's the thing, we've yet to see a major war between two nations with heavy losses and even the use of nukes, but it wouldn't necessarily even be considered WWIII if it were to happen. There could be a major middle east war with several nations and ground troops, chemicals and even nukes, but it wouldn't have to be WWIII unless everyone else got involved. Why would they? Same thing for Asia. Now in Eastern Europe with Ukraine, that's been a hot button lately, but even that .. isn't worth losing your entire nation over, or killing hundreds of thousands of people.

The strategic approach from all sides would be to avoid a WWIII even if they act tuff (see Russia), with the possible exception of the U.S. and NATO; and they'd have to be insane themselves to try to start it also. Everyone loses.

Look at what it took for World War II to fully start. There not only had to be a Hitler, but he had to go forward with his master plan, and then there had to be enough terrible things happening because of it for the U.S. to come to the aid of the Europeans. Had they not, it would've been a continental war and would've came out much differently.

So for a similar scenario, Putin would have to outright invade Europe out of the blue, and start rounding up certain types of people for camps. Or, Israel would have to blitz Iran, and Russia would have to choose to get involved, just like all of the surrounding Islamic countries in the middle east. Another similar trigger could be Iran nuking Israel in the coming years, and the U.S. getting involved, causing half of the world to declare war on the U.S., like a new axis.
edit on 8/13/2015 by r0xor because: (no reason given)

posted on Aug, 13 2015 @ 11:18 AM
link
I was wrong in my previous post-
It wasn't an earthquake/meteor that nearly caused a nuclear war-it was a Soviet detection system which misidentified sunlight refelecting of the clouds.It was a very close call and if not for one man-Lieutenant Colonel Stanislav Petrov,then none of us would be discussing this on the internet today.
We may not even have been born.
Its an interesting yet damned scary historical story.
Read more here:
www.theregister.co.uk...

The automated system I was talking about was a different one from the launch detection system in the above story as well.
It was called "Dead Hand"and is rumoured to still be in use today,which is bloody terrifying:
en.wikipedia.org...

Even by human standards,that is one insane system IMO.
No wonder the aliens don't want to talk to us-we're all mad.

posted on Aug, 13 2015 @ 11:19 AM
link
The last thing they want is to blow it all up. They would become unnecessary. Their vision of the world has them in control of everyone and everything.

They are legends, Gods even, in their own mind.

Whats a god without worshippers.

All the little wars are the third world war (or the fourth, depending) we're already in it up to our necks. The war is over control over the last places/countries that don't want to go along peaceably.

So the question becomes, are you a subject or a rebel?

originally posted by: intrptr
The last thing they want is to blow it all up. They would become unnecessary. Their vision of the world has them in control of everyone and everything.

They are legends, Gods even, in their own mind.

Whats a god without worshippers.

All the little wars are the third world war (or the fourth, depending) we're already in it up to our necks. The war is over control over the last places/countries that don't want to go along peaceably.

Right, so one would have to be megalomaniacal and harder than the rest.
Let's see who gets it.. 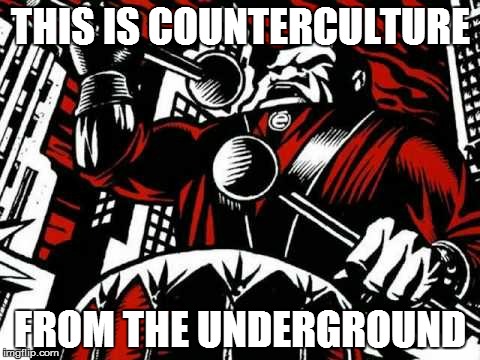 Oh screw it, stars all around

It's inevitable that you have probably heard of this album:

en.wikipedia.org...(album)
WWIII is KMFDM's thirteenth studio album. It follows the common KMFDM practice of naming albums with five-letter words. This is KMFDM's only release on Sanctuary Records. Lyrically, the album is very political. The songs primarily attack George W. Bush's presidency, various US wars in the Middle East, and America's foreign policy. The last track, "Intro", introduces the members of the band. It was recorded in Seattle, Washington.

But it is their world, they feed us, cloth us, they are gods among men. They look for immortality and a legacy in a way that makes me wondering what they really are. The creed

originally posted by: intrptr
The last thing they want is to blow it all up. They would become unnecessary. Their vision of the world has them in control of everyone and everything.

That is one reason I believe the most likley cause of a catastrophic nuclear exchange would be as the result of a technological mistake,rather than a human act.
As our reliance on technology becomes ever deeper,I believe the possibility of a technological mistake becomes ever larger sadly.
And when true A.I. comes onto the scene,well that won't make me feel any safer.
Yep-we are doing it wrong IMO.

originally posted by: boymonkey74
Nah the next global war will be called Space war 1.
I can see many smaller wars but not one on the scale of the other world wars.

First to get the money and educated citizens to do it, does it first, thus wins.

GLOBAL CAPITALISM TO THE GRINDSTONE is also a WWIII, especially if you live in a third world country.
edit on 8/13/2015 by r0xor because: (no reason given)

But it is their world, they feed us, cloth us, they are gods among men. They look for immortality and a legacy in a way that makes me wondering what they really are. The creed


Sorry for the delay…

Sorry I didnt reply to your other thread before it got removed,

sorry I didn reply to your last post here…

To this reply I say:

They are really full of themselves.

And when true A.I. comes onto the scene,well that won't make me feel any safer.


I donut think that a computer will ever know that it knows, (and thats just personal).

But that aside I think that whatever has prevented a major exchange up till now will continue to do so.

As along as we're on the Sci fi computer route what about the reports of "UFO"s hanging outside missile complexes, taking missiles off line? Thats suppose to be impossible, theres no off switch.

As an ET I'd prefer to renew the earth and harvest all the souls with an asteroid strike instead of nukes. Too much radioactivity left over, that would be their fault and impossible to clean up.

Ah, thanks for clearing the complete nonsense they were "texting", became completely incoherent at certain points.

Ah, thanks for clearing the complete nonsense they were "texting", became completely incoherent at certain points.

I'm sorry i am trying to figure out what you meant there about texting?