Hillary Clinton wants to send Americans off to camps

I listened to the clip above several times before posting this. Hillary Clinton is talking about forcing people to stay in camps. This is the most shocking thing I've ever heard from a US presidential candidate. It's as if the US populace goes out of its way to find the worst people possible for the most important elected positions.

Some people might laugh at the following thread but bookies rarely make mistakes on big events. Are we screwed? When I listen to the person in the above clip, I'm thinking female Hitler. It's not just similar content, it's similar charisma in my opinion.

Bookies are giving Hillary Clinton a 50% chance to be the next POTUS
www.abovetopsecret.com...

For those who are claiming that the video above is "humorous" or that the quote in the video was "taken out of context", here's the text of the complete quote:

Clinton said, “As I have gotten older, I have decided we really need camps for adults. And we need the kind of camps that you all run. I mean, really. Where — none of the serious stuff, none of the life challenge stuff, more fun. I think we have a huge fun deficit in America and we need to figure out how to fill that fun deficit. Certainly, for our kids, but also for the rest of us. We’ve become, in so many ways, a country that has slowly but surely figured out how to get along with more people, from more backgrounds, but there are still differences that we need to get over. You know, I said the other day at an event that we are much less racist, sexist, homophobic, all of those things, but we sure don’t want to spend time with anybody who we disagree with politically. I mean, that is just too stressful. So, you know, maybe mix it up a little bit. You know, you can have the red cabin, the blue cabin, have them come together, actually listen to each other. Wouldn’t that be a novel idea! And sort of create this much more open dialog opportunity, which I would like to see more of in our country.”

1. How is talking about forcing people to stay in camps "humorous" in any way, shape, form, or context?

2. If the quote is meant to be "humorous", what kind of sick, twisted person do you have to be to consider that to be "humor" and wouldn't that be a huge red flag of worse things to be thought up/things to come?

3. How is the quote "taken out of context" when the context is self-contained in the quote? If you're going to claim that the "context" is a "humorous speech" then you'll have to explain how point one is ever "humorous" in any way, shape, form, or context.

Even the thought that that is "humorous" is a huge slap in the face to all those throughout history that have been forced into camps by governments all over the world. As the man who made the video above wrote:

It may be nothing but.as Jew, I get just a little concerned when a politician talks about sending people off to camps-capiche!?!?

Anyone that denies that man's feelings or any such person's feelings on this issue or any other similar issue is scum in my eyes.

4. The quote above is consistent with the worldview propagated in Hillary Clinton's previous work "It Takes a Village":

Anyone thinking that any of the above is either "humorous" or "taken out of context" is someone I wish I could put on ignore.
edit on 13-8-2015 by Profusion because: (no reason given)

Hey I finally agree with Hillary, just not the whole "Americans" part.....Let's just substitute one word out of that and change it to government.....

Time to start over, who would say this? She is that confident she is the next POTUS huh? Donald gets away with a sly comment, not putting people into camps....This election will be a huge joke, already is a matter a fact!

posted on Aug, 13 2015 @ 07:47 AM
link
Oh no!! Hillary says there is a deficit of FUN! She thinks we might all get along better if we, on polar sizes of the political spectrum, were to actually have FUN together, be real people together playing bingo and singing around campfires!

Sorry. This is just a scary title for a humorous speech that Hillary gave, not a serious re-education camp speech.

Sigh. Go on. Enjoy yourselves... 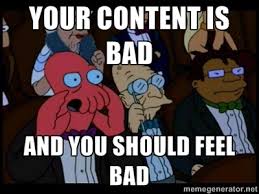 You are so far out of context with this that if the earth was flat, you would fall off.

Moral of her story, too many people (a.k.a. conservatives and republicans) have HUGE sticks in their butts and need to relax and have more fun these days.

posted on Aug, 13 2015 @ 07:51 AM
link
Same fear mongering that the republicans have been saying for years. It doesn't matter if it's a lie some people are gonna believe it anyway. Remember all thenhoopla for six years about Obama not being born in America. Ted Cruz wasn't born in America either, but now it's a non issue!!

posted on Aug, 13 2015 @ 07:51 AM
link
It seems the good people of the US like to find the worse leaders possible and vote for them twice, I can well believe soon there will be 120 foot high statues of DT and people bow down to them every morning giving thanks to there Great Leader

You are so far out of context with this that if the earth was flat, you would fall off.

Moral of her story, too many people (a.k.a. conservatives and republicans) have HUGE sticks in their butts and need to relax and have more fun these days.

I am still laughing at this.....EXCELLENT!!!

posted on Aug, 13 2015 @ 07:54 AM
link
This is an old speech that has been discussed many times over. This is just fodder for the loons that believe Hillary wants to march us to the trains and take us to the FEMA camps.

It's amazing to me how one side of the political spectrum is more prone to nuttery conspiracies than the other.

posted on Aug, 13 2015 @ 07:54 AM
link
She was speaking to the American Camp Association of New York and New Jersey at their Tri-State CAMP Conference. Not FEMA camps people, summer camps.

There's a lot of actual reasons not to want to see Hilary elected, this inane drivel from a paid speech to summer camp owners isn't one of them.

posted on Aug, 13 2015 @ 07:54 AM
link
She is talking hypothetically about how if we as adults could get together and have some fun instead of worrying and arguing about everything. Not FEMA Camps.

It's very out of context.

"In a paid speech before the New Jersey chapter of the American Camp Association, former Secretary of State Hillary Clinton told the audience that America really needed to implement camps that adults could attend."

Oh sorry Ant, we posted the same thing at the exact same minute.

posted on Aug, 13 2015 @ 08:01 AM
link
Fear mongering at it's finest. The maker of the Youtube video is taking this completely out of context. I hate Hilary, but we don't have to invent stuff to make her look bad. She's doing just fine on her own.

I'd go camping with Hills, as long as it was just the two of us.

First, I'd get an awesome camp fire going and then break out the Tequila and give her a really really good foot rub and have her tell me all about her war stories and spill the beans on the contents of the top-secret government documents stashed on her secret memory-stick. Then I'd break out the marshmallows and get down to business and afterwards we'd get matching tatts.

I thought you were going to kiss her..I was getting further and further from my screen dreading that lol.

I thought you were going to kiss her..I was getting further and further from my screen dreading that lol.

Only get excited with man on man? I will kiss him if you would like....

So you get turned on by Hillary?.
Do you often think about kissing her .

So you get turned on by Hillary?.
Do you often think about kissing her .


I would if I hadn't partied with her husband so many times.....

Not one word about Hope and Change part 2, just threats of FEMA camps for re-education or death for everyone adverse to becoming a slave to Kissinger.

"I am good at killing people" - BHO

"I want to have a higher kill count than BHO" - HRC

posted on Aug, 13 2015 @ 09:03 AM
link
To be fair I have had the same idea.
except instead of camps everyone has to go on a mandatory camping trip for 2 weeks.
I think it would spur World Peace