A week before The EPA disastrously leaked millions of gallons of toxic waste into The Animas River in Colorado, this letter to the editor was published in The Silverton Standard & The Miner local newspaper, authored by a retired geologist detailing verbatim, how EPA would foul the Animas River on purpose in order to secure superfund money...

"But make no mistake, within seven days, all of the 500gpm flow will return to Cememnt Creek. Contamination may actually increase... The "grand experiment" in my opinion will fail.
And guess what [EPA's] Mr. Hestmark will say then?
Gee, "Plan A" didn't work so I guess we will have to build a treat¬ment plant at a cost to taxpayers of $100 million to $500 million (who knows).
Reading between the lines, I believe that has been the EPA's plan all along"

I guess the real question is what the environmental impact of not cleaning it up at all would have been.

posted on Aug, 12 2015 @ 10:00 PM
link
It is odd that the media hasn't picked up this connection. And there has not been a response here either.
This is controversial and very disturbing.
I don't understand, is it actually profitable to create such a catastrophe?
Thank You

Source from the Newspaper:


Yes this letter was published in the July 30, 2015 edition of the Silverton Standard. -Mark Esper, editor and publisher. 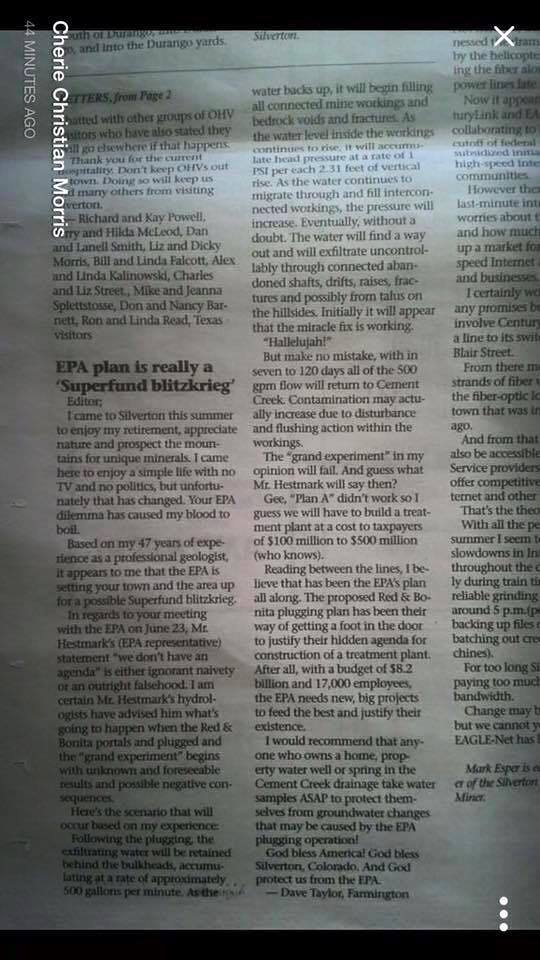 posted on Aug, 12 2015 @ 10:32 PM
link
I would not put it past the EPA or any Gov. agency to lie ,cheat and steal to further their objectives.Corruption in the agencies is a fact of life.

Bureaucrats are all jealous and jilty.

I have regained my trust in my government .

I trust they will lie cheat steal and screw us over in a heart beat.

If they are the same jerks that deliberately caused the events of 9/11 it absolutely is possible.

posted on Aug, 12 2015 @ 11:11 PM
link
This.. This is upsetting. They have the word Protection right there in their name. It says it on the outside of the building.. Isn't there laws against this??

originally posted by: WalkInSilence
It is odd that the media hasn't picked up this connection. And there has not been a response here either.
This is controversial and very disturbing.
I don't understand, is it actually profitable to create such a catastrophe?
Thank You


It is very profitable to the company that gets the no-bid contract for testing and clean-up of such "disasters." Since it can be declared a "state of emergency" there isn't time for bidding out contracts. Waaa--lah---somebody's close friend, nephew or frat brother gets the lucrative contract.
How much intelligence does it take to know that if you remove one wall of a containment pond with a bulldozer, bad things will happen downstream?

Seeing a story 1 week before the EPA had their purpose filled accident, is proof of serious and far reaching crimes by the EPA, who at the moment do not do anything without Obama calling the shots, but regardless of that, they need to be hauled away and given the death penalty for a crime of this magnitude, and the EPA totally shut down. This has to be a game over crime, and it must prosecuted either with, or without law enforcement servants doing their jobs, and if the Obama administration does, and says nothing, then you know he isn't just in on it, he directed it.

I dont believe it will clear up as quick as they say either.

Here is a photo of the river bank as it was going on.


see that orange moss that use to be a pretty green . So if it seeped into the moss as it went threw when will it ever clear up ? Think of all the sediment is now laced with it.

I makes me sick this destruction just for more power and more money . 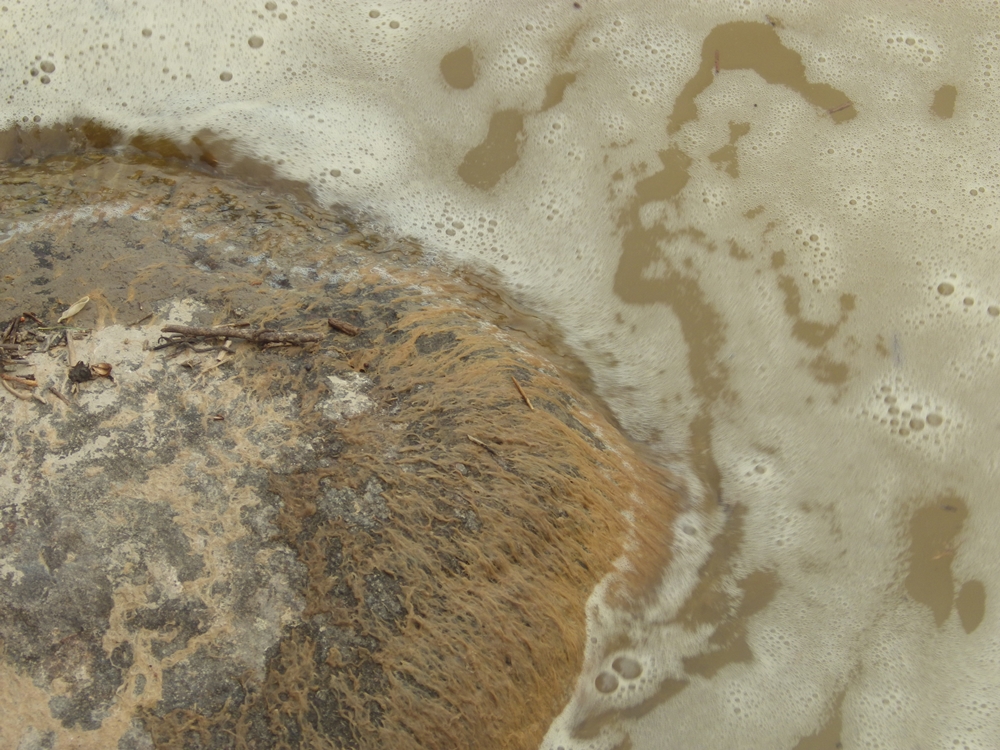 Moss is still orange and the plume has gone by.


They have don't this before. Call them EPA dumps or whatever one likes. They will authorize dumping into waterways. Don't think this was an accident.

originally posted by: WalkInSilence
It is odd that the media hasn't picked up this connection. And there has not been a response here either.
This is controversial and very disturbing.
I don't understand, is it actually profitable to create such a catastrophe?
Thank You

Disturbing that media hasn't pick up on it? More evidence that "they" have assumed control.

Begaye (president of the Navajo Nation) said his tribe is bearing the brunt of the massive spill that was accidentally unleashed by EPA workers inspecting the long-idled Gold King mine near Silverton, Colorado, on Aug. 5. Two-thirds of the San Juan River crosses Navajo land before reaching Lake Powell.

“This is a huge issue,” Begaye said. “This river, the San Juan, is our lifeline, not only in a spiritual sense but also it’s an economic base that sustains the people that live along the river.

“When EPA is saying to me it’s going to take decades to clean this up, that is how long uncertainty will exist as we drink the water, as we farm the land, as we put our livestock out there near the river,” he said. “That is just, to me, a disaster of a huge proportion.”


EPA tells Navajo Nation that Colorado spill will take ‘decades’ to clean up.


I still think this was an accident but who knows now. Here's another article on it.

The EPA is trying to cheat Navajo Indians by getting them to sign away their rights to future claims from the agency’s Gold King Mine disaster, tribal officials charged Wednesday, adding more to the administration’s public relations problems over the spill that threatens critical Southwest waterways.

Environmental Protection Agency officials were going door to door asking Navajos, some of whom don’t speak English as their primary language, to sign a form that offers to pay damages incurred so far from the spill, but waiving the right to come back and ask for more if their costs escalate or if they discover bigger problems, Navajo President Russell Begaye told The Washington Times.

Navajos say EPA should clean its spill rather than trying to swindle Indians.

originally posted by: ~Lucidity
Gee I dunno, but did the Gold King Mine owners create this mess to make humongous profits?

I guess the real question is what the environmental impact of not cleaning it up at all would have been.


it was an abandoned mine dating back to 1991. I had seen that on an map which [of course] I can't find now. There's something like 23,000 abandoned mines in Colorado alone.

Role of cyanide in ore processing

Cyanide, in the form of a very dilute sodium cyanide solution, is used to dissolve and separate gold from ore. [3] The process used to extract gold using cyanide was developed in Scotland in 1887, and was first used in large scale commercial mining by the New Zealand Crown Mines Company at Karangahake in 1889. [3, 4] Cyanide leaching is considered to be a much safer alternative to extraction with liquid mercury, which was previously the main method of removing gold from ore. [5] Cyanide leaching has been the dominant gold extraction technology since the 1970s, although small-scale and artisanal miners continue to use mercury in some areas of the world. [3] In Canada, more than 90% of mined gold is extracted from ore using cyanide. [3]

The concentration of cyanide used in this process is normally in the range of 0.01% and 0.05% sodium cyanide (100 to 500 parts per million). [2] As part of their best practices, mines use as little cyanide as possible for environmental, safety, and economic reasons. [2] Cyanide leaching is usually done along with a physical process like milling, crushing, or gravity separation. The pH of the resulting slurry is raised by adding lime or another alkali to ensure that cyanide ions do not change into toxic cyanide gas (HCN). [6] The gold is then further concentrated and reduced, before being smelted into gold bullion. Click here to see a demonstration of the gold excavation and refinement process.

Cyanide is toxic in large doses and is strictly regulated in most jurisdictions worldwide to protect people, animals, and the aquatic environment. Cyanide prevents the body from taking up oxygen, resulting in suffocation, which may be fatal to humans and animals without prompt first aid treatment. [7] However, people and animals can rapidly detoxify non-lethal amounts of cyanide without negative effects, and repeated small doses can be tolerated by many species. [3] Some long-term health effects have been observed in people who have a diet high in cyanide-containing plants such as cassava, and include goiter and depressed thyroid function. [8]

i have a question for " dave taylor " and indeed anyone else :

how vwould you have dealt with the origional 500gpm outflow of contaminated water from the mines ?


They have don't this before. Call them EPA dumps or whatever one likes. They will authorize dumping into waterways. Don't think this was an accident.


Yes, a deliberate act of pollution confirming the corruption, lack of public trust and self interest of this agency.

God help us from the transportation safety administration and homeland security.

It was the EPA's plan all along to make themselves look completely inept and possibly liable for the damage caused?

THIS article is saying costs may exceed $100 million.

More like, he suspected that their plan was going to fail from the beginning.

Did you know that these mine have been poisoning this river system for decades?

Between 2005 and 2010, three out of four of the fish species that lived in the Upper Animas beneath Silverton died. According to studies by the U.S. Geological Survey, the volume of insects and the number of bug species have plummeted. And since 2006, USGS scientists have found that the water flowing under Bakers Bridge – then downstream, into Durango – carries concentrations of zinc that are toxic to animal life.

Yes the EPA messed up on a monumental scale... But they've been pushing for this area to be a superfund site since the 90's. The fish and insect die offs could only be ignored by the local pen pushers for so long..

I'm also not sure where this $100-$500 million figure comes from, who knows is written in brackets after it, but the above article I linked States this..


The technology to clean the dirty water exists: a limestone water treatment plant. But the stakeholders group has no money to pay for it, and the EPA estimates it would cost between $12 million and $17 million to build and $1 million a year to run – in perpetuity.