posted on Aug, 9 2015 @ 06:01 PM
link
That's what the wiki link shows, the working one.
A period of about 1.5 billion years of good conditions and also from that period there between 5 and 40% of the tectonic plates left. The rest is just submerged via plate movements and turned to magma.

There seems to be a whole bunch of methods, some going towards 2 billion years like fission track dating. maybe even more, havent looked at all the methods.
en.wikipedia.org...

'' For example, a study of the Amitsoq gneisses from western Greenland used five different radiometric dating methods to examine twelve samples and achieved agreement to within 30 Ma (million years) on an age of 3,640 Ma. ''.
edit on 9-8-2015 by Choice777 because: (no reason given)

This parrot and speech!

posted on Aug, 9 2015 @ 06:11 PM
link
Haha that little monkey..i was thinking what a cute little rock..then it lifts that huge rock from behind the branch o_O

posted on Aug, 9 2015 @ 06:35 PM
link
Most people would look at this and go "Oh, that's interesting, human ancestors were using tools ealier than we thought.."

originally posted by: Choice777
Now i wonder if maybe other humans have existed before, whole civilisation maybe..another ancient facebook, internet, pc, everything...apparently it only takes 400 years for plastics to degrade completely and about 2000 years for metals IIRC...millions of years would erase all the concrete ever poured visible today. 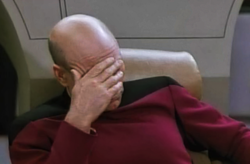 posted on Aug, 9 2015 @ 08:57 PM
link
Well, according to the traditional timeline, as I understand it, that fits right about into the time when we were really starting to distinguish ourselves from the other primates, walking upright and approaching the more human like form. So perhaps along with that evolutionary shift they really got to work on tools. I do entertain the possibility that our timeline of the progression of human civilization may be drastically wrong. Well, I entertain the possibility that things could go back very far, as you suggest, as well. But also, there is evidence supporting the possibility that there could have been already established civilization well prior to what we think, generally the absolute beginnings considered to be 10-12,000 years ago.

It has essentially been proven at this point that there was a massive, catastrophic meteor impact just under 13,000 years ago, which had a major impact on the environment and caused very significant loss of life on the planet. I find it to be extremely coincidental that JUST after this massive catastrophic event, humans just so happen to start getting together for the absolute beginning of civilization. After already having existed in their same physiological form for a couple hundred hundred thousand years or so. Combine that with all the lore in the ancient world of a past advanced civilization, including in the Egyptian records. And the sphinx has clear evidence of water damage, indicating it is thousands of years older than traditionally thought. Combined that with Plato apparently giving a dating of the collapse of Egypt relative to an actual know historical figure in Egypt, which aligns perfectly with this just under 13,000 years ago timeline.

Here is a link to one relevant link I happen to have saved.

Thank you for posting.
I think Homo sapiens made stone tools to defend himself in a world where there were so many other species that were stronger and faster than him. Even common apes were better equipped. So the brains of Homo sapiens and his ancestors had to give him a little advantage. Not too much because harmony between species had to persist. A rule of live on earth for as long as life on earth exists.
But on a certain day –in a manner of speaking- there came a big bang in human consciousness. Which make me think about creationism, not by the real God, but by the so called gods … www.evawaseerst.be... (read evawaseerst - red dots are in English)

posted on Aug, 10 2015 @ 06:34 AM
link
I managed to get the pic and edit it.
So im saying that if life takes about 1.5 bil years from eucaryotes > animals> mammals, then the period in the Archean might have been a good fit. We just can't seem to find any remains cause only 5 to 40% of the landmass of that time remains. 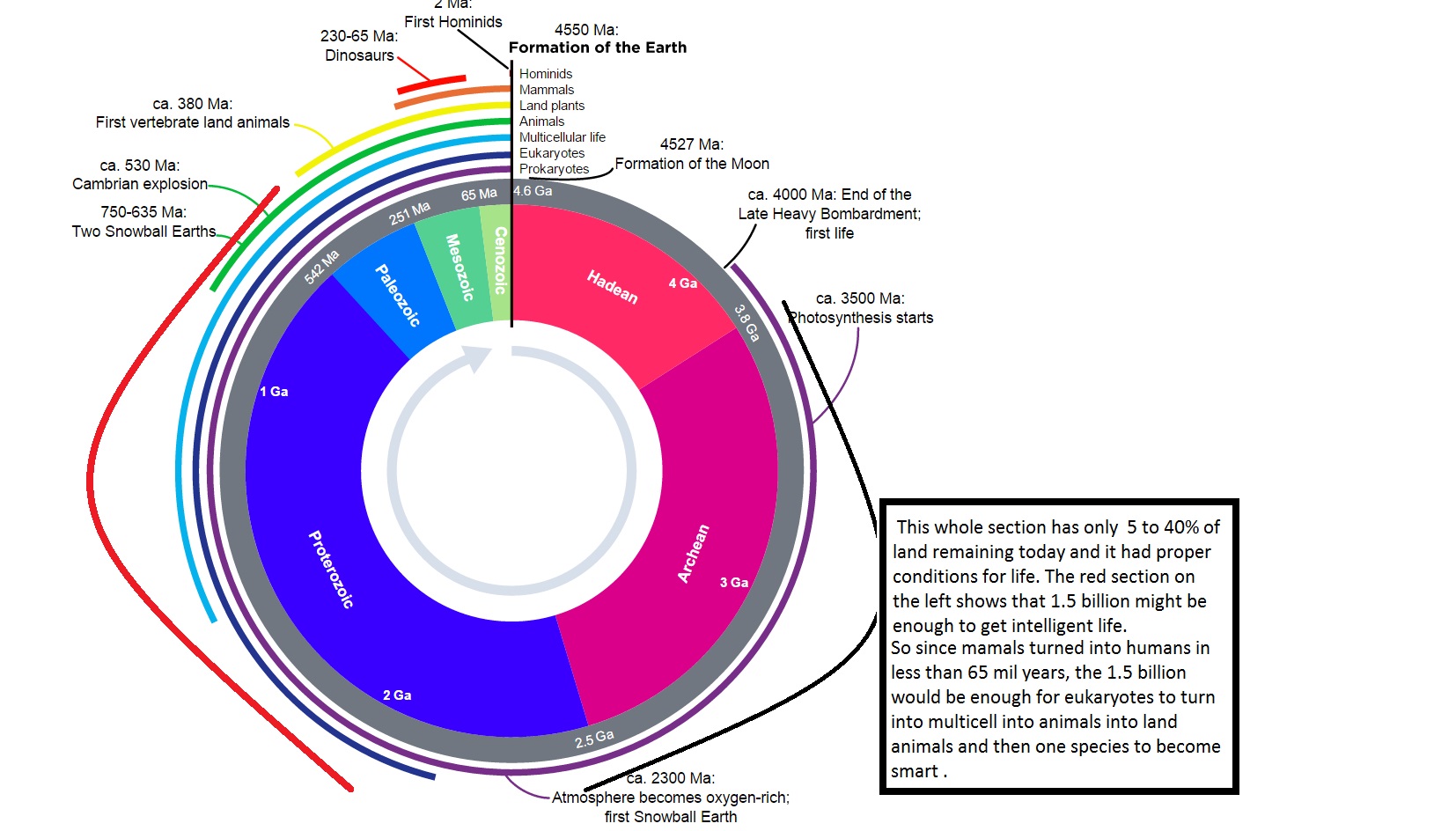 Also there's this article here, but ignore the part with ''intelligent design''. What's interesting are the Archean microfossils that shouldn't really be there so early in the archean. So microbial life might have managed to evolved sooner than previously thought. That means even more time to fit the 1.5 bil years required for intelligent life and then a total wipe out of its civilization.

"could be the oldest microbial fossils yet documented," further quoting a paleobiologist who states:

The authors have demonstrated as robustly as possible, given current techniques and the type of preservation, the biological origin of these microstructures.
Always thinking from a materialistic perspective, the New York Times notes that these microfossils imply life arose "surprisingly soon" after the existence of life became even a possibility:
Their assertion, if sustained, confirms the view that life evolved on earth surprisingly soon after the Late Heavy Bombardment, a reign of destruction in which waves of asteroids slammed into the primitive planet, heating the surface to molten rock and boiling the oceans into an incandescent mist. The bombardment, which ended around 3.85 billion years ago, would have sterilized the earth's surface of any incipient life.
edit on 10-8-2015 by Choice777 because: (no reason given)
edit on 10-8-2015 by Choice777 because: (no reason given)

originally posted by: Choice777
As long as they come back to give us warp drive and antigravity, i'll forgive them for abandoning this pos rock.

"our ancestry goes a bit far back than we thought. "

Maybe Not are ancestry.
the dinosaurs made it as far as us?
then made nuclear bombs!
or some thing bigger.
like the Hadron Collider ?

if some thing made a Very big explosion.
it would look like a meteor impact!

humans are so Arrogant that they
think they are the first and only intelligent life!

Now i wonder if maybe other humans have existed before, whole civilisation maybe..another ancient facebook, internet, pc, everything...apparently it only takes 400 years for plastics to degrade completely and about 2000 years for metals IIRC...millions of years would erase all the concrete ever poured visible today.


This story was around a few months back

Not sure about internet etc but there have definitely been past advanced civilisations, or more advanced than we're lead to believe.
The dates keep getting pushed back further and further and there is a lot being kept from people.

You are absolutely right! There's evidence in Kenya that Homo Erectus was using fire as late as 1.5 million years away and they loved cooking meat apparently, as shown by charred bone remains..... me thinks Erectus invented the first barbeque!

posted on Aug, 10 2015 @ 04:48 PM
link
Right..but what about the Archean period? That spans like 2 bill years. And there's very little remaining of it like only 5 to 40% of the actual continents from back then. Could there have been a civilisation that also got wiped back there ?
Like this ? The red section on the left has enough time from eukaryotes all the way to mammals, and the black section on the right might have enough space and conditions to fit a missing civilisation.

Also to think that we shared the earth with as many as five types of homid .
We came out on top because of our forward thinking abilities Erectus didn't have the capacity to do so even though physically they would have been hard to beat.

Also can you imagine the amount of myths about other odd people which actually have it's origins of when we walked the earth with other Hominids?.
Handed down and changed over the years.

posted on Aug, 10 2015 @ 05:59 PM
link
What seperates us from every other living creature is our empirical collection in linguistics, we have a tendency to consider ourselves as highly intelligent, when at most, you have a few unique individuals every century who are intelligent. Only thing we are lucky enough to experience is their findings and call it human evolution. Its their creativity, dedication and sacrifice we get to share among us. The first primate who learned the skillset of using a tool to crack open a nut, didnt know he made a difference for survival for generations to come, for him it was a simple way of staying alive.

originally posted by: Krazysh0t
Why do people act like this is something new? We've known about other genus' of Homo using tools for some time now...

Yea that's what I was like. Like didn't we already know about this? Lol
edit on 10-8-2015 by TheJourney because: (no reason given)