posted on Aug, 7 2015 @ 01:06 PM
link
Back in the 1960s, a photo surfaced from the 1880s from one of the magazines at the time (either True, Saga or Argosy?) of what appeared to be a HUGE monstrous dead bird nailed to a pair of barn doors. The issue is that this picture ceased to exist. It vanished in thin air. Nobody has seen it resurface since the 60s (I believe)

Does anyone here have any information on this? Its been discussed here, but its been a while. I'm just curious if any new information has surfaced.

The story of the “Tombstone Thunderbird” has intrigued me as long as I can remember. Even as a child, I remember reading the story and being amazed. How, I asked myself, could what seemed to be a prehistoric creature like a pterodactyl be shot by cowboys in the 1800's? Such a thing seemed impossible but evidence existed in the form of many stories and references to the event and of course, existed in the form of a photograph. That was the really exciting part - that photograph! I still remember what it looked like today.

You see, in more recent years, an even greater mystery has developed than whether or not a group of cowpokes shot down a "flying monster" in the Arizona desert. That mystery surrounds the elusive photograph that was taken of the incident and which many of us (myself included) believe that we saw. But if we did, where is the photo and what has become of it over the years?

The Mysterious Thunderbird Photo
edit on 7-8-2015 by Bloodydagger because: (no reason given)


Nope. Its a different one. It was nailed to barn doors.

Came across this, not sure if this is it or not. Either way it looks pretty cool. who really knows though...

Looks to be some knock off pterodactyl.... IMO 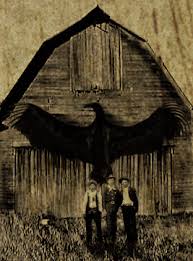 There have been hoaxed photos since this story was heard about. Karl Shuker discusses it here

Do you recall if that's the same "style" barn along with three people standing in front?

its authenticity , provenence etc are all ` unknown `

the pic by itself is nothing but a curio

try asking yourself one simple question :

there did the rest of the population go ?

there did the rest of the population go ?

Perhaps it was one of the last of its kind? (assuming its a true story)

Do you recall if that's the same "style" barn along with three people standing in front?

The pictures you posted were some of the mock-ups. Google Civil War + pterodactyl and you'll find a few more interesting, but also bogus, pictures of a similar kind.

As far as the style, I just know "nailed to two barn doors"....I haven't seen the picture myself. I don't think anyone here has.
edit on 7-8-2015 by Bloodydagger because: (no reason given)

maybe because its just as blurry as my memory of the photo....

A picture of the picture maybe?

posted on Aug, 7 2015 @ 04:48 PM
link
P.T. Barnum was around back then, wonder why he didn't try and get his hands on something like that for an attraction in his show? Also wonder why a guy like Mr. Ripley from Believe it or Not fame didn't look into it.

There is another picture similar to that in an old book that I suppose I lost, I bought one years ago for the Thunderbird picture that had but it has disappeared. I`m about 65% sure it was in the book titled "Mysteries of the Unexplained" Readers Digest 1982, but Ive flipped through it a hundred times since a similar thread years ago and its just not in it.

Perhaps it was in another book and I just forgot, I have a lot of books.