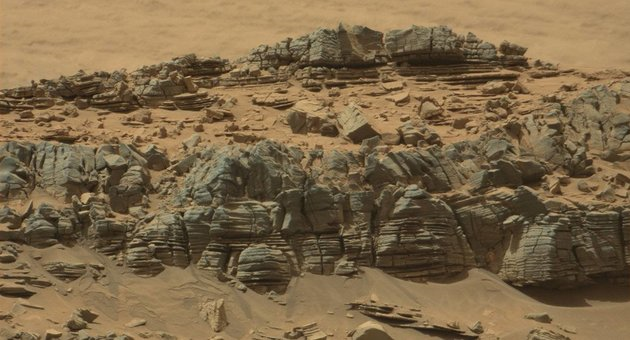 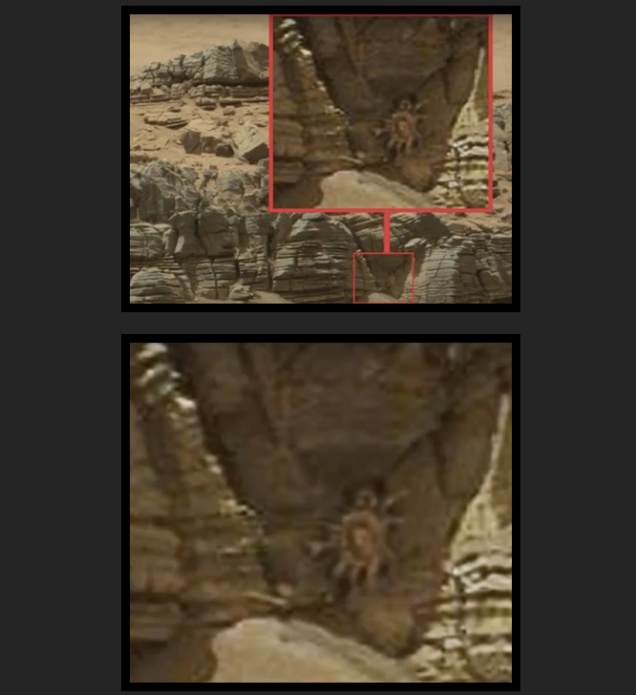 ...yeah, what the freakin facehugger is that?

People seem to be calling it a Crab, but whatever it is, it definitely appears organic in shape. Maybe old vegetation?

This IS an official image, not a hoax. Still, any artilces around this image are dismissing any possibilities and making a joke out of it. The Time magazine article, is kind of odd in that it just blatantly says it's nothing then shifts the bulk of the article to the story of 'pareidolia' (seeing familiar shapes in unfamiliar objects), but no clarification from NASA, just the usual "nothing to see here" routine. Same goes for the Huffington Post except they actually bothered to include at least some facts before the punchline...

But don't worry, future missions to Mars are unlikely to encounter any crab monsters. Seth Shostak, Senior Astronomer and Director of the Center for SETI Research, said he gets images showing formations such as this one about once a week. "Those that send them to me are generally quite excited, as they claim that these frequently resemble SOMETHING you wouldn't expect to find on the rusty, dusty surface of the Red Planet," he said via email. "It's usually some sort of animal, but occasionally even weirder objects such as automobile parts. Maybe they think there are cars on Mars." He said it's really just a phenomenon called pareidolia, or the brain's ability to make shapes out of random objects -- like seeing animals in clouds. "Far from being a vision defect, pareidolia has a lot of survival value if you need to quickly spot predators in the jungle, for instance," he wrote. He added: "Recognizing a crab in a landscape filled with wind-weathered rocks is no more surprising -- nor more significant -- than seeing a winking face in a semi-colon followed by a parenthesis. " www.huffingtonpost.com...

Something that has been posted several times before.

dang it! Sun like Stone? ...that's the last description I'd have come up with.

It looks like it has a face on it though. It's weird non the less.

Serioulsy though, it looks alive. ...really alive.
edit on 7-8-2015 by rexsblues because: (no reason given)