But I missed The Daily Show's finale also - just finished watching it, and my cheeks are tear-stained now....

Jon Stewart has been a staple part of my household since he first started. I am very and sincerely sad that we are losing another one of the most sensible, sane, and important news shows (satire or not, I, like millions of people, got most of my news from The Daily Show - it has been the only way I can really stomach any of it). Funny as hell in a very sad way that it was the same night as the three-ringer "Fox" debate.

Some of you, I know, don't have cable. Sad as it is that without cable, or an internet connection, people can't watch it.
So, I thought I'd just post a link to it here.
(Was surprised to see no thread about Jon Stewart's final show - so: here you go, Our moment of Zen)

He does discuss the debate a little bit at the beginning....
but the rest of show is a tribute to 16.5 years of comic relief while dealing with the insanity that is the USA.

It really says something about the news in the country when the best source of news you can get is a satirical program that makes fun of real news... Jon, you will be missed.

I thought on George Carlins interview with Jon ""...and you are going to show us a lot and I look forward to it."

So - ATS - which did you watch (if either)? Did you watch both? A Fox news spectacle, or a Comedy Central special (arch-rivals, in case you didn't know).
Would be interesting to "poll" our members to see how many watched which, or both - cast your vote now!
(Or, "fess up", whatever you want to call it.)


For the record: I DID watch the debate highlights before watching the full episode of TDS.
edit on 8/7/2015 by BuzzyWigs because: (no reason given)

Smacked them rich corrupt folk around a it
"Bernie Sanders ✔@BernieSanders
What I'm hearing so far: tax breaks for the rich, more people losing health insurance and more talk about war. This is not what we need."
"Bernie Sanders ✔@BernieSanders
The very rich get richer, everyone else poorer. And Republicans who take campaign money from billionaires have nothing significant to say." 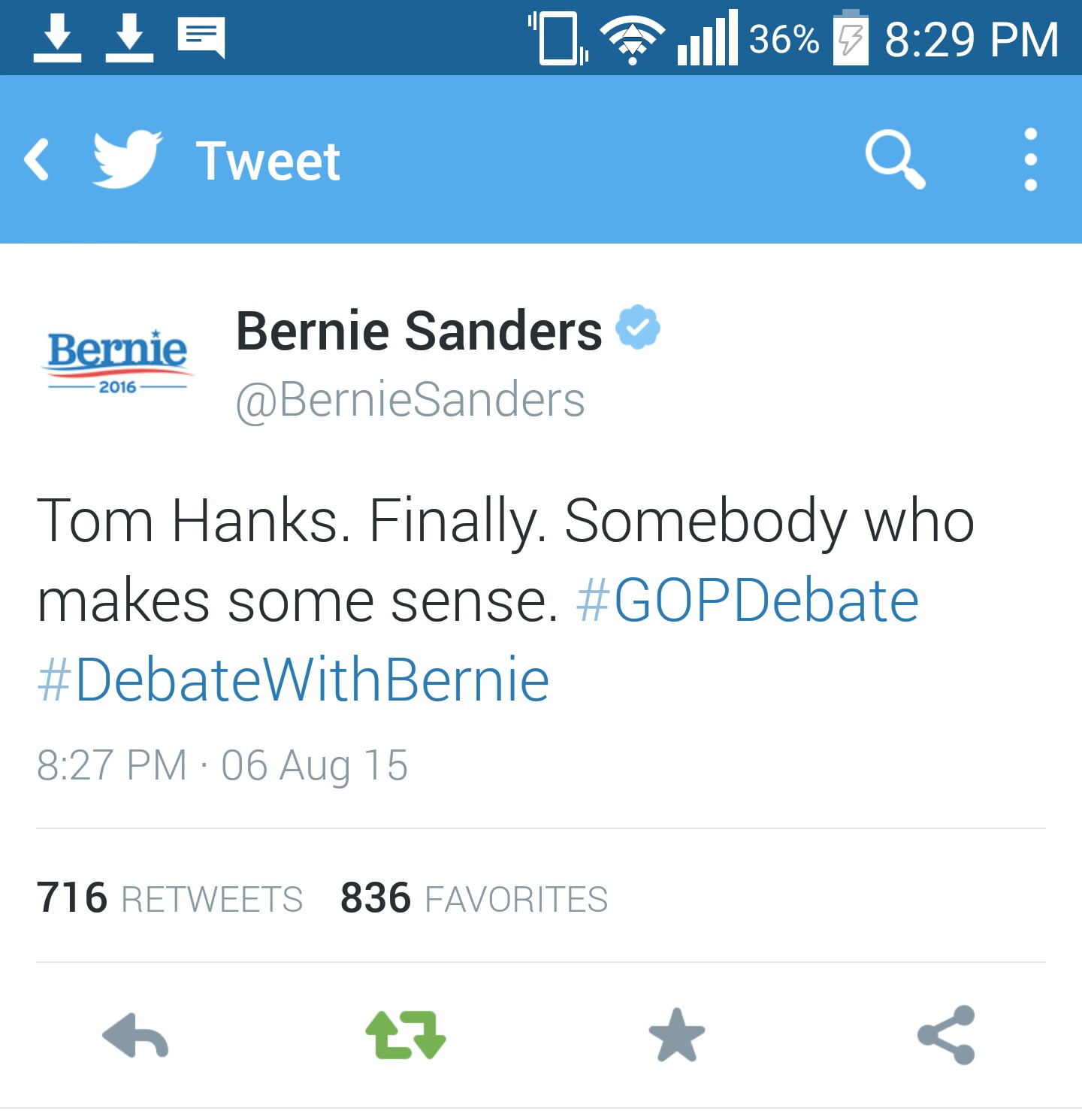 posted on Aug, 7 2015 @ 10:37 AM
link
A huge void will be left but he definitely has passed on his legacy to others... I think especially with John Oliver.

Heh, i started watching John Stewart after making Stephen Colbert a must watch.

And like someone already said, i found it ironic that they educated you more and better than those that run the mainstream media outlets.

posted on Aug, 7 2015 @ 11:21 AM
link
I'm sure it won't be long before someone comes in here and says that Stewart was a biased, satirical propaganda mouthpiece, who excelled at "dividing" our great country (I find that's the new conservative BS catchphrase, divide).

I'm sorry, but he was actually pretty good at calling out Democrats and Independents too.

It was also worth noting that Stewart was actually friends with Bill O'Riley - they had some kind of weird love/hate relationship. Their charity debate they did was hilarious. Some of the interviews he did really put the people on the spot -- and he'd ask the questions I think they deserved to be asked. He asked some hard questions....

I've always said ... it's a sad state of affairs when I get my comedy from the news, and my news from comedy.

but still - losing the Daily Show and The Colbert Report both makes me sad. Larry Wilmore (Gilmore?) didn't pass the audition for me as Colbert's replacement.

Remember: Stewart's early shows weren't that great. It wasn't until after 9/11 he really started to hit his stride. Wilmore is just getting his show together, I'd give him a few years still before he really catches his stride.

I'm not a tweeter, but it doesn't surprise me one tiny bit.

What a joke the GOP candidates are.
edit on 8/7/2015 by BuzzyWigs because: (no reason given)

I'll give him a chance. John Oliver had it right out of the gate.

Kristin Schaal (Louise on Bob's Burgers)
Steve Carell (everyone knows who he is! I've been binge watching The Office - didn't realize that Ed Helms - who plays Andy -was a Jon Stewart apprentice either!)

And of course, toward the end of the 'guests' arriving - STEPHEN!!!

I'm a Baby Boomer, pal.
Thankfully, I exposed my kids (who are Millennials) to Stewart and Colbert when they were preteens. They're in their mid 20s now.

I had to watch Stewart to being my IQ back to normal after that...whatever the hell it was on Fox.

We started talking about politics (obvi), and she mentioned Elizabeth Warren and said she hoped Warren would run. I told her she said she won't, but possibly she might be Sanders' VP running mate.....

she said, "THAT would be AWESOME!"

And I said, "almost as good as the Stewart/Colbert ticket!" (which we both had bumper stickers for) from last time.