These parasitic wasps deposit their eggs onto spiders, which, yuck. But it gets worse: the wasp larvae force spiders to build reinforced webs to keep them safe as they transition into adulthood. Once the webs are done, the larvae kills the spiders.


The zombie enslavement begins when a wasp lays eggs on the back of a spider. The resulting larva feeds off of the living spider's body fluid. About 10 days after hatching, the larva essentially turns the spider into a zombie that constructs a tough cocoon web to protect the baby wasp as it matures.


Nature is full of crazy things.
edit on 6-8-2015 by RealTruthSeeker because: (no reason given) 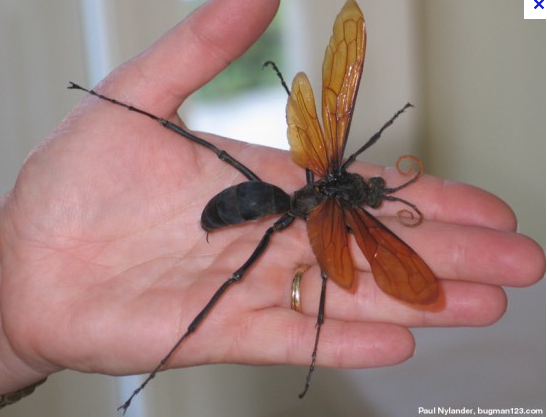 Man that is a scary looking wasp. Yeah, being eating alive slowly doesn't sit well, what a horrible way to die.

DaFuq? I never realized tarantula hawks were that big. Can'timagine getting stung by one of those. Look at the stinger on that mofo.

I completely agree, I was so shocked to see this planet had such big insects I had to do a little search, and what I found basically made me feel both extra dumb and extremely amazed.

Now it's one of those hype sites I think, so I'm not 100% on the legit aspect of the photo and insects sizes but wow are they amazing non the less.

10 Biggest insects in the world

The beetles blew my mind, we have some big bugs on earth.


Nah, here we keep them as pets

I guess I won't be having sweet dreams tonight. Those are some really big bugs. The Moth was my fav though, very beautiful. Thanks for posting that.

we have those here. Haven't seen one in awhile. Same color, velvety looking. they didn't get all that big, though. Average size of a paper wasp.

These are monsters. Can't miss them or the sound they make (like a humming bird). Used to see blue ones, long time ago.

"Blues" were the most striking…

is this some kind of theory for why zombies even exist?
edit on 6-8-2015 by AgentSqueaky because: (no reason given)

posted on Aug, 6 2015 @ 11:59 PM
link
a reply to: intrptr
I've seen some black bodied wasps lately but nothing that size! Cool looking but seems like it would be frighting to hear and see it coming.

At least in the Animal Kingdom. Last news on zombies in nature, if anyone missed it: "Deadly Fungus Turns Ants Into Zombies" - Source


I know, huh. Dude is like, yah I have this giant wasp crawling on my arm, "thats been drinking".

Found this interactive for ant species.

There are no ants in Greenland, so sad.

Theoretically Zombies could exist, but it would generally be considered just another virus as it's unlikely it would actually kill the host before it absolutely needs to. Nature loves taking convenient shortcuts, it's how evolution happens. Why would any virus kill the host then animate the corpse, when the corpse is already animated prior to death? It would make a lot more sense to not kill the host and just control them instead.

These are great examples of that, although it's not technically correct to call them Zombies in the way common culture imagines - we've kind of warped the definition to make it more scary.

Incidentally, there are numerous viruses that already change our behavior for it's own ends. Just look at Ebola for instance, it doesn't NEED to make you bleed from every orifice, it does that in order to spread itself to others. Even things like skin parasites make you itch to spread it around.