Co2 levels are not going down.

posted on Aug, 6 2015 @ 03:44 PM
link
At this point, I doubt it matters at all if man is solely to blame, partially to blame, or not at all to blame in the current warming trend we have all been a part of. We have all been told the driving force is CO2.

Since the first alarm bells rung, there have been some steps taken to reduce CO2. We have better emission standards set by the EPA for coal fired power plants. I used to work in instrumentation and did some work at a coal fired plant in Minnesota, so I saw the start of these changes first hand back in the late 90's.

But we have been making efforts to change. We have been taking baby steps to rectify this should it be our fault. The problem seems to be, it's not making any difference at all. 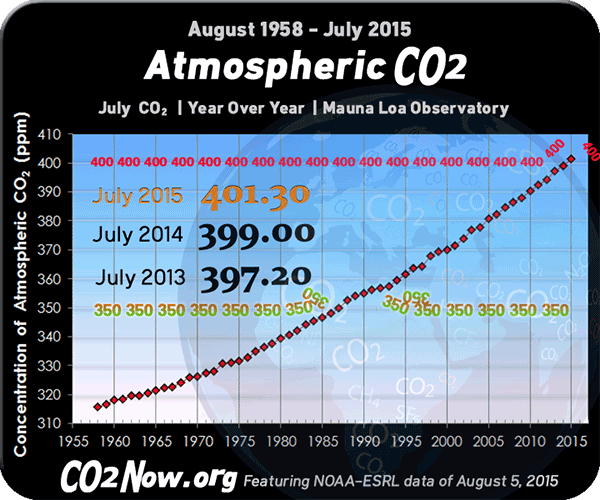 If that graph is to be believed, (and I have no reason not to believe it) then for all the steps we have been and are taking, it's not working, and appears to still be increasing. Now I can't say for sure, but it would make sense that companies that do emit pollution would be actively trying to limit what they put out. So what does this tell us? Is there any hope at all? Or is CO2 as much of a factor as we have been told?
Remember, there have been a few scientists who believe that CO2 lags temperature instead of drives it. (must be the 3% left over)

So does this tell us anything? Is it too soon to tell? Are we doomed?

posted on Aug, 6 2015 @ 03:46 PM
link
Earth and humans will adapt to the new levels over time. As long as the changes don't happen in a very short time frame we will be fine and life will go on. Trying to change nature is like pissing in the wind.
edit on 2015/8/6 by Metallicus because: eta 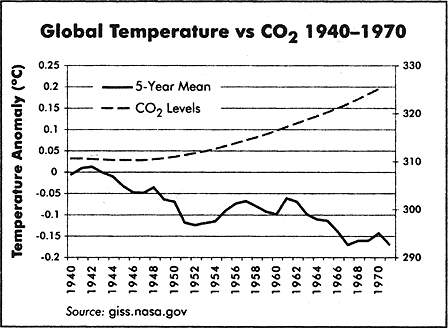 Ever heard of forcing caused by water vapour? I didn't think so. You might want to look into it - it could help answering your question.

Of course I have. Ever heard to increased CO2 indirectly effecting water vapor in the atmosphere?

Of course you haven't, else you wouldn't be asking such a silly question.

posted on Aug, 6 2015 @ 04:02 PM
link
If it was a real issue we wouldn't need convincing of anything. Nobody should be convincing anybody about why and what steps we are taking and if such a threat was imminent, the government would react without the peoples consent if they ultimately knew and could validate that the threat was real.

Too many politicians are telling me what we are doing to this planet and when I step back and look, all I see is an elitist mentality at the helm with little or no regard for their own excessive nature or contribution to our climate woes. I am left with a blank stare, holding up a sign saying, "need more input".

Thank you for taking it personal - a reply which was not even directed at you.

Water vapour is a greenhoue gas - orders of magnitude more abundant than CO2. It traps heat. This causes ocean to evaporate. More water vapour gets in the atmosphere. As a side-effect, CO2 trapped in the ocean gets released. CO2 rises.

There you go, the answer to why CO2 continues rising independently from our efforts.

What causes oceans to evaporate? Oceans are rising, not declining. They are simultaneously heating at increasingly greater depths with this rise.

You have described one positive feedback in relation to human caused CO2 emissions, and then try to divorce it all the same?

What causes oceans to evaporate? Oceans are rising, not declining. They are simultaneously heating at increasingly greater depths with this rise.

The paradox is on your side too. If CO2 creates a positive feedback, it should evaporate more water because of the heat generated by the greenhouse effect.

How do you propose to solve this?

There's no paradox, there's a lack of understanding. You will solve this by educating yourself.

Ah! Of course. I "just don't get it". I haven't been "reeducated" enough in AGW theory matters.

The physics behind forcing is theory-blind, you know.

So instead of attacking me and bail out, why don't you answer the question instead?

Maybe you know not the answer?

Hm. Let me tell you the answer, okay?

Question: why does CO2 forcing do not result in drop of sea level caused by evaporation?

Answer: because, according to the model, the heat also melts glaciers, which induce a rise in sea level which compensates loss by evaporation.

Or perhaps a simpler explanation is that you had a kneejerk reaction to defend your faith in AGW?

Okay, I'm going to rewrite this, because your answer makes no damned sense, in that it makes perfect sense, and yet is EXACTLY what AGW predicts, and is playing out.

So who the hell are you fighting, and why?

You just seem like a nutter who has no rhyme to his reason.
edit on 6-8-2015 by pl3bscheese because: (no reason given)

Why do you think ice dislocates from land and expands over the sea?

What about heat, hm?

Wait, WTF are you even saying here? You just did a 180 on your position? Are you trying to play both sides for no good reason?


I have no positions, mate. A true scientific consdiders every single possibilities - only a politician limits his mind to sides.

Have a problem with that? I can see why - it's not every day you meet someone who does not restricts his mind to a tiny box.

I don't know who you're fighting, or what you're saying. We're in agreement on the science, and yet you think this is somehow not the science of AGW, or that I have different reasoning. It just seems really weird. Will you please state your position, cause it seems to be jumping all over the place from post to post.

Okay so a troll. Understood.

Please note that you're absolutely incorrect that the reasoning you present is not included in AGW.

You should reconsider rewritting it, cause your coming off as a nutter.

I have no positions on the issue. A true scientist explores every single possibilities.

That's fine, except you do have a position, and this is that some of your reasoning is not considered in AGW theory, which shows obvious bias. Sorry, not falling for it.

You can't have it both ways. You're claiming to be independent, and yet targeting falsely at the same time, switching positions as you choose to fit a winning side. That's not a large mind, that's a manipulative puny mind.
edit on 6-8-2015 by pl3bscheese because: (no reason given)

Right. If I don't place ALL my faith in AGW, then obviously I am biased.

This just like saying, if I don't place ALL my faith in Jesus, then obviously I hate christians.

It has nothing to do with that, quit the manipulation, it's weak.

It has to do with you making false claims to attack the scientists position in regards to AGW.

You don't want to admit fault, that's your deal, but I'm not feeding you any longer.
edit on 6-8-2015 by pl3bscheese because: (no reason given)

I have to make some popcorn.

At this point, I am fairly certain of one thing concerning our climate. That one thing is that we don't know very much about it, yet try desperately to act as if we do. We can't predict weather a week out with much certainty, and I seriously doubt we can say what the long term future will bring.

I just thought that since we have been making some effort, albeit small, there should have been some indication of said change. Since there is none to speak of, it looks like we need a lot more time to compile a lot more data, so at some point we will know how all this really works.

But in the mean time, I feel certain that global warming will not sneak up on anyone and kill them instantly. The seas may rise, or they may fall, but they won't do much of anything overnight.

It's a real issue, if politicians where serious they would take serious steps but they ain't because it would hurt the economy allot.
Politician's ain't telling/warn much about global warming really because they don't have a good solution. Now what is worrisome is that scientists ain't ringing the alarm bells enough, they don't want too much public attention since they getting attacked, getting death treats and so on...

Now back to topic, the TS talks about goal plants, goal plants are just a tiny problem,meat processing for example, the amount of people and how much energy they use be it with cars or heating up their homes. Of course also the industry (and our consumption) but if you look at everything it's just allot of co2 going in the sky. So each year the economy grows, more people, more cars, more consumption, just more of everything meaning more co2.
Also co2 makes the oceans more acid where fish gets it harder and harder surviving, but where algae and jellyfish thrive.. going back to oceans conditions we had here 100 millions years ago or so..
And when the Ice caps melt more and or when the permafrost melts like in places like Siberia tons and tons of methane wil be released in the atmosphere and then we could see a very rapid rise of the global temperature (in just a few years!), methane is far more potent then co2..
And when that happens our own survival of our species is in great danger, already many species having problems adapting right now but the temperature rise is going slow now, imagine a rapid climate change which might be not that far in the future really.
We could see 4-5 Celsius global rise (on average) when methane gets released in the atmosphere very quickly..The great Ice age was minus 4 degrees on average! and when other species (&also plants/trees) go we also go, we need them more then you think and we ain't that tough compared with many other species as well.
We really are talking about the survival about our own species here, if you get kids now be very worried about their future..
edit on 6-8-2015 by Pluginn because: (no reason given)