And it's a not a spaceplane but a reusable launch platform? One that will carry a booster to the edge of space that will then launch a payload into orbit?

What do you think this thing will be used for?


Boeing has been awarded a $6.6m contract to design a cheap, reusable mini shuttle that can launch military satellites.

The small, planelike craft is known as the XS-1 program—short for 'eXperimental Spaceplane 1', and could blast off in 2019 on its first test mission.

It is hoped the craft could quickly launch small satellites that could defend against the growing threat of Russian and Chinese space weapons.

ambitious and it looks like the USA wants more surveillance quick.

Dale Brown, years ago, started using what he called NiRTSATs, or Need it Right This Second Satellites. Same idea. They were small groups of cubesats launched from a carrier aircraft, in the books it was a DC-10.

It was a good idea on paper, and a better idea in reality.

posted on Aug, 6 2015 @ 02:05 PM
link
You'd think someone would invent a way to put a high altitude balloon with a propeller or something to stay on station.

Then use that prop to come home.

posted on Aug, 6 2015 @ 02:20 PM
link
The intended purpose of this kind of capability is to be able to replace orbital assets faster and cheaper than China and Russia can eliminate them. It is a counter to the ASAT capability that both potential adversaries have demonstrated.

However, what I am intrigued by is the fact that-- with a 2 metric ton payload capability (up/down)--this could probably transport 2 or 3 astronauts to/from Low Earth Orbit for a fraction of the current cost.

Boeing has been talking for awhile now about building a bigger, manned X-37. This could be a compromise between the crew size on that, and a smaller platform.

The issue with that type of scenario is if both sides start to eliminate each other's orbital assets the amount of debris floating in those orbital arenas is going to make it impossible or at the least exceptionally risky to keep replacing what ever was disabled/destroyed. Pretty soon no one will be able to put anything in orbit without it getting pummeled by an orbiting debris field.
Consequently, IIRC the Russians and the US have an agreement to leave each others geo-sync. sats alone since that orbital altitude is so important to keep clear. The Chinese however, who knows what they'll do.

Here is an interesting read on the building space cold war.

"What do you think this thing will be used for?"

I suggest to buy time before revealing the heavy-duty stuff we constantly see in the air, the triangles, of course.

posted on Aug, 6 2015 @ 09:31 PM
link
Back in the late 1980s, I was attached to the Office of Exploration at NASA Headquarters for about a year. The Challenger Space Shuttle crash had happened only a few years before and in its aftermath there was a big study (funded by the Air Force) to figure out how reliable you would expect a vehicle of that size and complexity to actually be. The answer was that you would predict a big, Cryogenic first-stage launch vehicle with big, segmented solid rocket strap-on boosters to fail about 2% of the time (about 1 time in every 50 launches). That was pretty damn close to the observed failure rate and was unacceptable to the national security payload community. This eye-opening realization motivated the Air Force to reinvigorate the expendable launch vehicle fleet so they wouldn’t have to depend on the Shuttle for really important payloads.

You would think that that should also have motivated NASA to move away from 100% reliance on the Shuttle for getting crew to and from space, since human life was also supposed to be highly valuable. At least that’s what I thought, and that’s pretty much when I stopped trying to be a Shuttle Astronaut. I also conducted a little engineering design study to figure out what kind of crew transport vehicle would be the safest. The Air Force study showed that launch vehicle rockets were not all created equal. It shouldn’t surprise anyone to be told that bigger, more complex and more highly stressed systems are less reliable than smaller, simpler systems. The historical data showed that a monolithic solid rocket motor (like the kind used on surface-to-air missiles, for example) could be maybe 50 to 100 times more reliable than a cryogenic LOX-H2 motor.

Everything pointed to the idea that the best way to get humans to and from space was one at a time. This would result in the the smallest possible launch vehicle. Among other features, this would probably allow air launch and recovery, which would have certain safety and cost saving features built in. The smallest vehicle should have the lowest engineering and development cost (according to all the standard cost models). Single occupant launchers would generate the fastest learning curve, everything else being equal. (If you want to get 10 people to orbit per year, for example and you use 10 single occupant launches instead of 1 ten-passenger launcher, you will build familiarity with the operations 10 times faster.) In case of a system failure (like the Challenger crash) the time and cost to recover should be a lot lower. And so on. Some Astronauts wanted the capability to bring an incapacitated crew member back with another crew member in attendance, so maybe the minimum number of seats should be two instead of one.

In either case, you want the smallest crew launcher you can get by with and have quick turn-around time. Of course, this is exactly the opposite of what the NASA manned space flight office wants. They want one enormous rocket that can carry 7 or more to/from LEO at a time—together with cargo. That results in a rocket that could only be flown once per year (if you’re lucky) probably is too expensive to ever get built in the first place, and swallows up the available budget to do anything else useful.

I believe that NASA would develop something like this only at gun point, kicking and screaming all the way. However, I am hopeful that DARPA might be able to do and end run.

posted on Aug, 6 2015 @ 10:28 PM
link
Wonder if you could quickly assemble 10 x 2 tonne parcels into somthing. or you could sent 20 tonnes of supplies to the ISA like what Boomer above said if you lost one rocket the station still gets 18 tonnes.

Is it just me, or is this all dirt cheap as far as american military spending goes.

oh this is just an addendum for them to come up with plans.

The real contract will be worth billions don't you worry. 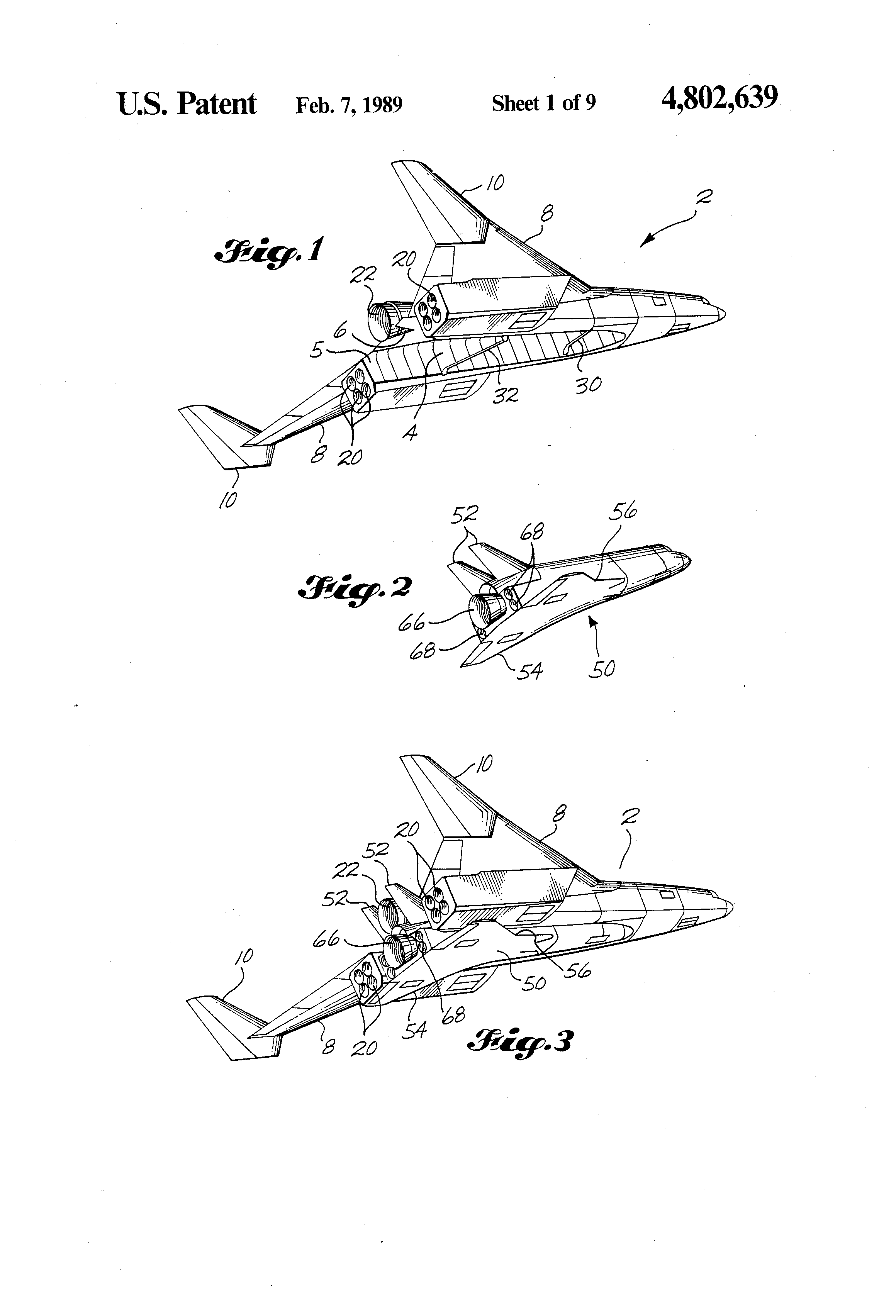 Boeing patented this in the mid 80's. I'm guessing they might be farther along than people think.

posted on Aug, 8 2015 @ 09:44 AM
link
I think this would make a good ASAT platform too. With a quick turnaround time, and an ASAT payload, and the appropriate numbers it could be a short notice, rapid way to eliminate satellites.

originally posted by: Zaphod58
a reply to: grey580

Dale Brown, years ago, started using what he called NiRTSATs, or Need it Right This Second Satellites. Same idea. They were small groups of cubesats launched from a carrier aircraft, in the books it was a DC-10.

It was a good idea on paper, and a better idea in reality.

As an idea I have been exploring during my work breaks, and using a 3D model (i.e. on Maya
Xsi, Corel Draw and other CAD/CAM/FAE software), I think it is NOW possible for a
Non-NASA Commercial Operator to use
The CURRENT and very publicly available
Plans for the SPACE SHUTTLE and import
Them directly into a CAD/CAM program.

Then apply Aerodynamic, Thermodynamic,
Hull Torsion, Shear, Tensile and Compressive
Load testing on all that 1970's era space shuttle
hull and interior components using that fancy
Software so that an ALGORITHMICALLY optimized
hull and interior structure is created that can be
then 3D machined and robotically welded
using high-strength but relatively inexpensive
8000 series aluminum.

With 3D printed aluminum oxide ceramic composite heat shield plates created using
A two-layer symmetric hexagonal plating system,
I think the cost of building the shuttle itself
Can be easily reduced to less than
Ten Million dollars IF as much 3D printing
And CNC machining and robotic welding
As possible is used.

The technical term is:

"Design For Easy and Fast Manufacturability"

This REALLY reduces costs significantly if your
CAD/CAM/FEA software can do the optimization
Necessary. I suggest using CATIA for the design
Portion and Midas NFX for the Structures Stress
analysis and parts engineering/manufacturabilty
analysis. Using these software systems will save
HUGE MONEY down the line during 3D printing
and final shuttle/booster assembly.

To further reduce costs use a mobile sea launch
Platform such as a used but modified semi-sub
floating oil rig platform and launch in international waters on an equatorial plane.

Flight control could use true real-time Linux OS
that's certified for critical systems and a full autopilot using a combined GPS and inertial
guidance system for launch and orbit, a fully
Automated robotic payload delivery system
and then possibly a Pure vision recognition
for final landing at an airstrip. No Astronauts
At all...it's basically a spaceplane drone to
Save as much launch cost as possible!

The Launch rocket itself SHOULD use the
same design as the 1960's era Saturn V F1-series
Motors but do a Finite Element Analysis to simplify
and stress analyze all the parts ...then machine
them out of high temp ceramic composite for use
with relatively simple, cheap but effective
Hydrogen/LOX fuel and oxidizer combo! That would cost another ten million to build but the
total cost of launch shouldn't be more than
5-to-7 million per launch which is MUCH CHEAPER than even a 50 million bucks a launch for today's
Cheapest system of say Boeing Sea Launch.

Even the launch rocket itself could be made re-usable IF all its major components use
8000 series Aluminum and High temp
Alumina-ceramic composite.

Those F1 motors could do over a million pounds of thrust. Using a cluster of them under a single large
Reusable and Combined Hydrogen/LOX tank and
Combo booster would save a lot of money!

posted on Oct, 20 2015 @ 07:04 PM
link
The program manager of the XS-1 program is saying that the project's phase one has been delayed a year while DARPA decides about whether to move forward to the next phase or cancel the program. In the mean time the money is still there and the team will be trying to make the concept and technology mature. No links, sorry.

posted on Oct, 21 2015 @ 02:28 AM
link
a reply to: intelgurl
What is the problem with the reusable launcher ? at each time the program are cancelled, program after program.

originally posted by: darksidius
a reply to: intelgurl
...at each time the program are cancelled, program after program.

In some cases the program gets cancelled because the technologies don't sync well, causing additional and unacceptable research and development costs. When that happens DARPA will pull the plug, not willing to pour more money down a black hole when they have other similar if not redundant programs also in development. Standard procedure would be to cut their losses and have the team come up with a "lessons learned" synopsis which hopefully would prevent repeating the same mistakes on future endeavors. One of the caveats being that if the program is black it is compartmentalized and the lessons learned may or may not be available to future project management teams.

Wow. It's been close to 5 years since you last posted.

What have you been up to?