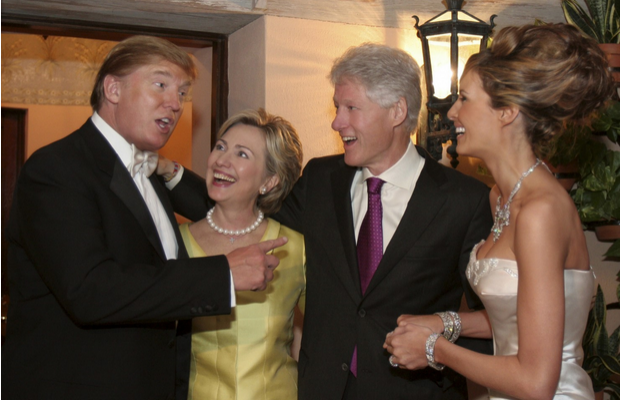 Four Trump allies and one Clinton associate familiar with the exchange said that Clinton encouraged Trump’s efforts to play a larger role in the Republican Party and offered his own views of the political landscape.

you know i've been thinking about this for awhile now. had a feeling that the clintons were behind it. seems i might be right.

Clinton’s personal office in New York confirmed that the call occurred in late May, but an aide to Clinton said the 2016 race was never specifically discussed and that it was only a casual chat.

yea right, funny how after the talk he decides to run. dollars to doughnuts trumps next big move is to run independent.
anyone who thinks that hill / billary and donald are not in cahoots, i got some land next to the railroad tracks in mena ak, or if you prefer in china that i''ll sell you drit cheap.
edit on 6-8-2015 by hounddoghowlie because: (no reason given)

And, they "assured" him good treatment by the SEC should Hillary get elected !!

posted on Aug, 6 2015 @ 09:08 AM
link
Trump has been talking about running for over a year all over his Twitter account.

Not only that, but this theory relies on the assumption that he decided to run within a week, rather than knew well in advance.

Most likely he was weighing up the opposition amidst their many scandalous efforts.

posted on Aug, 6 2015 @ 09:11 AM
link
It used to be that American politicians could talk to each other and (gasp) actually be friends even if they were from different parties. Now, with the new temperament brought about by FOX and other hate "news" outlets it is major news that Donald Trump and Bill Clinton, who live and work in the same city, had the gall to speak on the phone. To me this is the end result of reality television, where an entire generation has been taught to scheme and manipulate others, and that if people talk they must be "aligned" and stopped before they team up to get you. Idiots have matured into older idiots.

it's the Ross Perot play, put someone that speaks out in a direction that you know people think and or favor then run as a independent. plain and simple.

This is the Washington Post reporting the story, they are a rather liberal news outlet.

come on people WHY cant You see this!

originally posted by: AugustusMasonicus
a reply to: Aleister

This is the Washington Post reporting the story, they are a rather liberal news outlet.

Yes, liberal as cats in a washing machine (?), but the atmosphere created where this is even a story (Trump and Bill Clinton talk on the phone, World in Shock!) was created by many other factors, most of them by the conservative and/or reality game mindset.

I have been going back and forth between CNN and Fox the past week leading up to the debate and they are both talking about his past comments and contributions to the Clintons.

i'm way older than that reality television bs, if you go back and look splitting the support has been done before.
plus if you know anything about U.S. elections, popular vote doesn't do it, it's the electoral college that decides. lot's of people have won the popular vote, but lost due to the electoral college.
which i could go on and on about,but i won't. but let me just say this, all the elections are about is voicing what the movers and shakers are thinking about trying to do. they get a idea of what they can push through and what they can't. they already know who going to be president.

in other words it's all just one big reality show. you wanna bet who's gonna be the next president. dollars to doughnuts it's gonna be Bush.

it's the Ross Perot play, put someone that speaks out in a direction that you know people think and or favor then run as a independent. plain and simple.

That's certainly what it looks like. The GOP would never nominate The Donald as their candidate; Jeb has that one in the bag!
edit on 6-8-2015 by olaru12 because: (no reason given)

posted on Aug, 6 2015 @ 09:34 AM
link
Regardless of whether or not the Clintons urged Trump to run, one thing is for certain, the Clintons are not making people support Trump; the people are doing it all on their own.

Exactly. It's now routine that something like this makes the "news". Two guys talking on the phone. I bet Bill won't be happy though when the Downald tears his wife up verbally tonight (if nothing else, to prove that he's not a "Friend of Bill", or at least on the "Best friends of Bill" list (although he probably is, money talks).

originally posted by: LeatherNLace
Regardless of whether or not the Clintons urged Trump to run, one thing is for certain, the Clintons are not making people support Trump; the people are doing it all on their own.


shows What idiot sheep the public are ! baa baa baaaaaa

Well, his past relationships with the Clintons is newsworthy.

Trump is only there to take out Jeb (don't call me Bush) Bush.

The Kochs have already announced they are buying the nomination with their $900,000,000.

And Walker is their boy.

Trump will drop out of the race once Jeb (exclamation mark) has been irretrievably damaged. Probably citing a Syrup emergency.

posted on Aug, 6 2015 @ 11:05 AM
link
I am just thinking if.... during their friendly chat... or actual meet-up in person (re: the photo with Trump in white tie & Bill in maroon tie)
... if they even, in a good natured way... wondered just what the voters would say about Hillary & Donald being on the same ticket !
... I for one would think that a Clinton-Trump ticket would be the quickest way for the Nation to heal itself after 2 terms of B. Hussein Obama systematically shredding the USA...
Trump would rebuild the domestic side of the USA and oversee the unwinding the WH love fest towards the Islamic Jihadists , reverse the criminal dismantling of the Military & VA
and reeling-in the corporate-oligarchy that control the law making branch of gov't
possibly even the current WH grip over IRS & DHS/FBI use of power to pressure all levels of the Judicial branch by the Attorney General E Hold-er

posted on Aug, 6 2015 @ 01:25 PM
link
It could also be that Trump, like so many other people, had fond memories of the Clinton years, and was trying to feel out if Hillary in the White House would take us back to what he perceived to be the successes of those days, and when he discovered otherwise ... BOOM! we were all graced with The Donald.

Who knows exactly what he thinks we need (aside from himself), but maybe he decided it wasn't her.

People in the political stratosphere talk to each other all the time.

Adversaries at work, not so much away. It's always been that way, with few exceptions.

They attend the same parties, social functions. This isn't a story with a whole lot of meat to it.