What Happens When You're Banned From ATS??

The site was down for some time tonight, and I KNEW it had nothing to do with being BANNED, but I have wondered before...

I have had my moments here, things get heated, bad things get said. (my apologies) and I've never wanted to be banned, I've just been through some bad times, and at other times I have been overly out-spoken.... I DO wonder though, if I were permanently banned, what would happen when trying to access the site?

Would my IP be blocked, where I wouldn't ever be able to even see ATS content anymore, or would I simply be unable to login. Do the MODS send an email to notify those who are forever banned? Would there be a notice or would you be doomed to find other websites to find out when the world is going to end?

Again, I NEVER plan to be perma-banned, but I'm interested to know what would happen. Anyone else?
edit on 6-8-2015 by Wookiep because: (no reason given)


I have often wondered that my self.

I used to think you would just get the 404 page with the men in black and with a message about being banned.

Which I guess could still be the case, but they don't use that for the 404 anymore.


The Overlord has never ban anyone permanently that i know of. I believe he has stated that he never would .

So what happens , Whelp... When you try to log in you used to get this 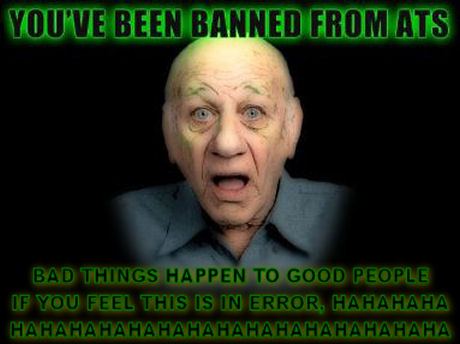 This means you have to basically clear your cookies , etc , etc and start over until you can learn to follow T&C ...

Over time The Overlords method does work , Trust me

Once you get the idea out your head that ATS Is not "yours" and that you can't just say and do what you want here , things seem to go smoothly ...

Its in allot of peoples nature to rebel .

Let us not make it our nature to do so here


I'd watch that. For hours.

In Russia, ATS DDoS you!

Really? Can you confirm this....somehow? Or are you being sarcastic? I just can't tell anymore!

It is one of the great mysteries.

I can only recall the stories of near banning experiences. Some say there is a white light at the end of a long tunnel in which they can see the avatars of those that were banned before them. Others speak of past ATS layouts with the ability to give a post 1 to 5 stars and then being tortured by the evil one... the one star bandit who wrecks your staff average. And others mention a blackness like a permanently turned off monitor.

I guess it all depends on what you believe in and how closely you adhere to the T&C's.

If banned from ATS one would not experience an inability to load ATS, as has been the case with the DDoS attacks. ATS would load and a screen stating one is banned would appear.

In events like today, where ATS simply loads, and loads, and loads... that could be a number of issues, from ATS being down, to malware on ones system, to being a sign one needs to clear their browsing history and cookies. But it's not the dreaded ban hammer.

Is that Benard from Lost?

originally posted by: Wookiep
a reply to: Kapusta

Really? Can you confirm this....somehow? Or are you being sarcastic? I just can't tell anymore!

originally posted by: EvilBat
a reply to: Kapusta

Is that Benard from Lost?


Please don't ever insult me by dropping the name Benard on me ..... Really , do you think Bernard would have lasted as long as me ? ...lol

So a banned person would reccieve a page, when attempting to access ATS, with a clear message indicating their banned status? Good to know! I wonder how one would refute a said ban if this happened. Perhaps an email convo with the staff? Oh well, I don't plan to ever be there, just something I have wondered. Thanks for your feedback Heff.
edit on 6-8-2015 by Wookiep because: (no reason given)

Good to know, then. Thanks!

has anyone ever bounced back from a ban ?

Close. You would use the contact email address and speak with Springer or SO. At that point it is an owner/admin call for restoring a banned account. A full ban is a rare accident but can happen. A post ban on accident is more likely and I will say I have done it before while trying to give an applause. A few times, in fact.