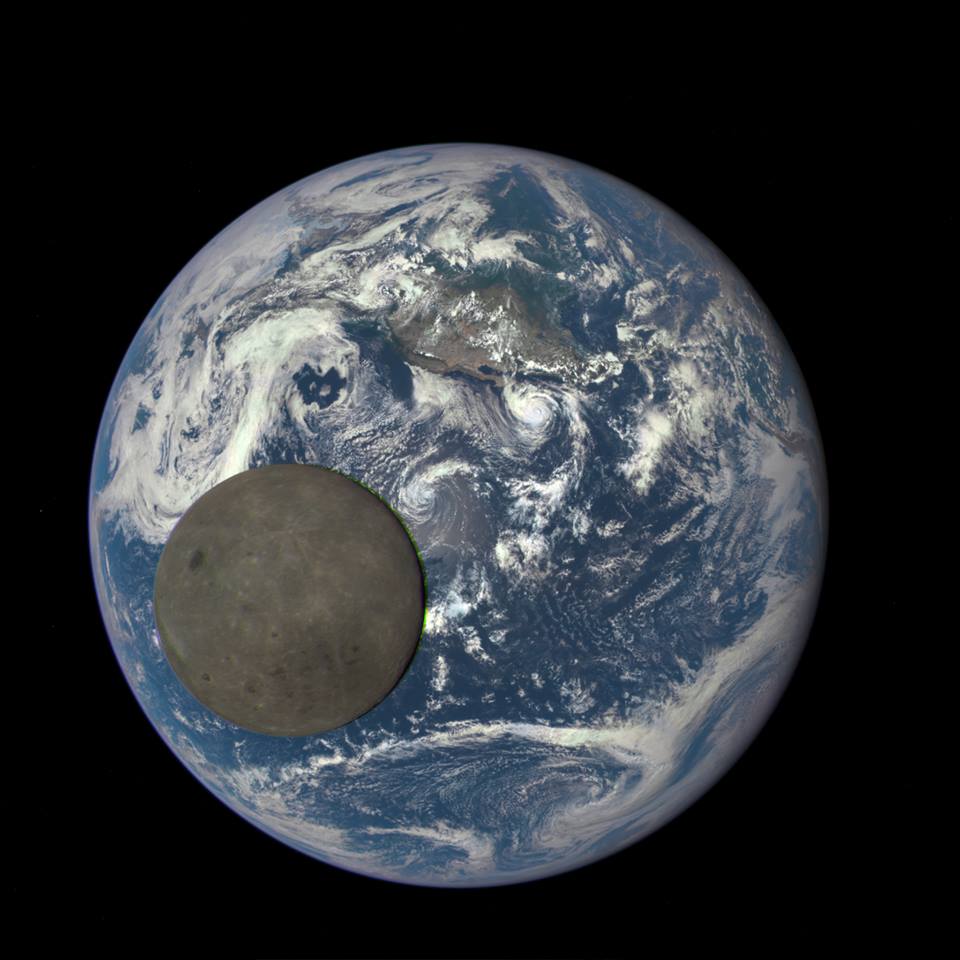 EPIC maintains a constant view of the fully illuminated Earth as it rotates, providing scientific observations of ozone, vegetation, cloud height and aerosols in the atmosphere. Once EPIC begins regular observations next month, the camera will provide a series of Earth images allowing study of daily variations over the entire globe. About twice a year the camera will capture the moon and Earth together as the orbit of DSCOVR crosses the orbital plane of the moon.

These images were taken between 3:50 p.m. and 8:45 p.m. EDT on July 16, showing the moon moving over the Pacific Ocean near North America. The North Pole is in the upper left corner of the image, reflecting the orbital tilt of Earth from the vantage point of the spacecraft.

moon's far side overlapping the Earth
This image shows the far side of the moon, illuminated by the sun, as it crosses between the DSCOVR spacecraft's Earth Polychromatic Imaging Camera (EPIC) camera and telescope, and the Earth - one million miles away.
Credits: NASA/NOAA
The far side of the moon was not seen until 1959 when the Soviet Luna 3 spacecraft returned the first images. Since then, several NASA missions have imaged the lunar far side in great detail. The same side of the moon always faces an earthbound observer because the moon is tidally locked to Earth. That means its orbital period is the same as its rotation around its axis.

I thought it was fake at first. It looks like a flat stone someone set on a photo of the Earth. Amazing nonetheless. Its certainly not something you see every day!

This is pretty cool, Think I am gona try and find more images.

posted on Aug, 5 2015 @ 12:45 PM
link
Wow! epic image from EPIC. They even have an animation on the link you provided. Thank you Bloodydagger!

originally posted by: PersonneX
Wow! epic image from EPIC. They even have an animation on the link you provided. Thank you Bloodydagger!

Yeah, the animation in the link is amazing.

originally posted by: intrptr
I saw me go by.

LOL. I was waving.

It looks so flat because the lens needed to zoom that tight from one million miles away would have a flattening effect to everything--it's actually a technique that can be used in order to make places look more crowded than they are, or make things appear close that are actually far away.

It's the opposite effect of a fish-eye lens, that makes everything seem super far away from each other and somewhat bulbous.

But honestly, I don't like the image exactly because of that reason...it looks like a poorly accomplished cut-and-paste project.

originally posted by: japhrimu
.... So THAT's what the backside of the moon looks like!? I was expecting something totally different!

Either way it's cool.


originally posted by: intrptr
I saw me go by.

LOL. I was waving.

That is exactly what I thought I was looking at when I first saw this picture, lol

Either way it's cool.

Well, it's the "far side" of the moon (the side always facing away from Earth). But when these images were taken, it was fully lit by the Sun.

I thought the earth was an oblate, pear-shaped spheroid.


The Earth DOES bulge at the equator, but it is not really noticable to the eye. The average difference in the "width" of the Earth as opposed to the pole-to-pole "height" of the earth is about 45 km (28 miles).

So nobody is lying. It's just that you can't see the difference.

originally posted by: occrest
I thought the earth was an oblate, pear-shaped spheroid.

There is something off, about this picture. I am no pro, but it almost looks amateurish.


in these unaltered images.